Le Jeune was a pretty good, although never highly successful, publicist and fundraiser for his Chinook Jargon newspaper.

Can you spot the screaming typo in the last line of the article below? (I’ll give it away afterward.)

The main point for me, though, is that you get to read how successful the “Chinook Writing” already was. It had only been introduced to the Salish people of southern BC in 1891! 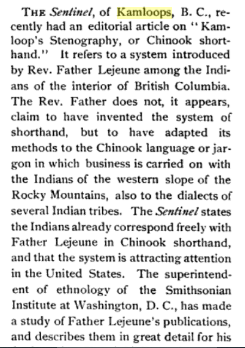 That “forthcoming Church bibliography” from the Smithsonian is actually James Constantine Pilling’s famous 1893 “Bibliography of the Chinookan Languages (Including the Chinook Jargon“!