Words for ‘White people’ in BC Chinook Wawa

By the way, a reminder, those angled brackets < > enclose stuff that I show you just as it’s spelled in an original old document, in this case transcribed from BC’s unique Chinuk Pipa alphabet.

This < Hwait > is essentially limited to modifying the nouns < man > or < tilikom >, so: ‘White man/men’ and ‘White people’. Which is why I capitalize it here. (Chinu Pipa has no capital letters, though.)

< Hwait-man > seems to be a direct loan from local English, one of hundreds such in the northern dialect of Jargon, especially in BC. A simple Google Ngram Viewer search shows us that the phrase “the white man” was undergoing a significant surge of use around 1890 (the second set of peaks below), which is the era when Chinook Pipa came up: 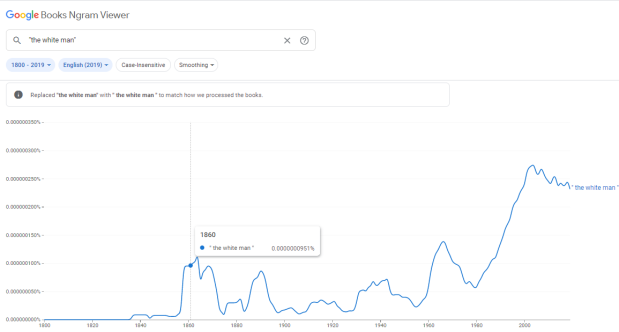 But an interesting common synonym of the preceding is < Tkop-man >. That is, a recent literal translation of < Hwait-man >!

Both of these show that the national distinction that used to be so very important in older and southern CW, between the specific terms < Kinchoch > and < Boston > (‘English’ and ‘American’), no longer meant much in 1890s BC.

What people were concerned with was the presence of Setters generally, by that time.

So they mostly spoke broadly of ‘white’ people.

This development is a rare occurrence. It’s far more frequent in BC Jargon for a new English word to be taken in to express a more specific meaning than previous CW vocabulary could.

And it goes to show you that language is cultural behaviour. It always reflects what’s going on in the society where it’s spoken.

2 thoughts on “Words for ‘White people’ in BC Chinook Wawa”