Another in my surveys of Chinuk Wawa’s traces in Pacific Northwest tribal languages — this time in Alaska’s Eyak language — turns up the usual fascinating discoveries 🙂The late great Michael Krauss’s simply enormous typewritten dictionary is our resource for examining Eyak. This is a distant relative of both Tlingit and the Athabaskan / Dene languages (including Navajo & Apache), as well as of the Siberian language Ket.

I have a small connection with this dictionary, because it makes use of my mentor Prof. Robert Austerlitz’s fieldwork data, and because Prof. Krauss oversaw the Alaska Native Language Center, which once gave me a small grant to research CW in Alaska.

The Eyaks are the farthest north coastal group known to have spoken Chinuk Wawa. This “out at the edges” status makes it interesting to ponder just how much Jargon the Eyaks knew. A good deal of their European-culture vocabulary comes from their western neighbours, the Chugachmiut / Sugpiaq speakers (an “Eskimoan” language), and it tends to be Russian loanwords.

Eyaks would’ve learned CW later than anyone else did (except maybe the Ahtnas inland from them!), and from sort of secondhand sources at best. From the documented pronunciations, we can tell that they picked up Jargon from Tlingits. And Tlingit CW was not the “whole mahosker” (as another teacher of mine, Prof. Joe Malone would say), having lost many words and some grammar as it was suddenly transplanted during the Klondike gold rush.

And the need for CW would’ve vanished pretty soon, as Alaska became demographically and economically dominated by non-Native Settlers quite fast. By 1910 more than half the people in the territory were Whites.

Unsurprisingly then, there isn’t a ton of Jargon material in the Eyak dictionary; what we find can be taken as a pretty representative indication, as Prof. Krauss includes all loanwords used by his Eyak consultants.

(Take note, Krauss, like many dictionary makers in our region, has a tendency to call a loanword ‘English’ when its ultimate source is in this language — even when it’s the Chinuk Wawa form of the word that winds up in Eyak!)

There’s highly useful historical information — or as I call it, linguistic archaeology — in what follows…

The Eyak word for ‘snuff‘ comes from English ‘tobacco’, but as Krauss suggests, as a trade good distributed before English was widely known in the area, Chinuk Wawa and connections with Yakutat Tlingits (compare Tlingit tawaakú for non-Native tobacco) more readily  explain its presence here.  In BC CW I’ve documented tabako… 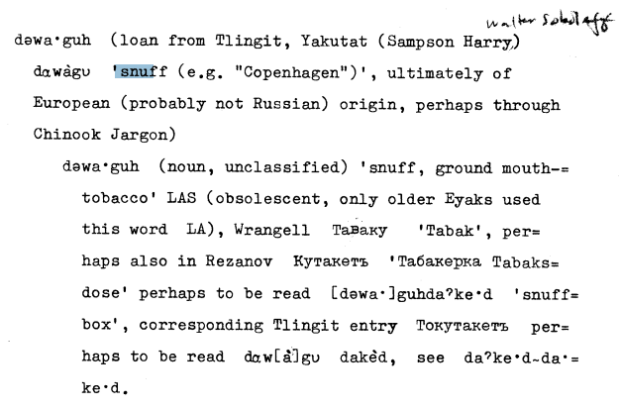 One of the most widely distributed CW loans in the Pacific NW is ‘dollar‘; you can spot it as CW rather than English when a language uses it in the typically non-Settler senses of ‘silver’ and generic ‘money’. Eyak has this too in a Tlingit-accented pronunciation. The additional word < wə3dana > noted below is an Eyak borrowing of the Tlingit calque on CW dala-siyaxus (literally ‘coin-eyes’) for ‘eyeglasses‘: 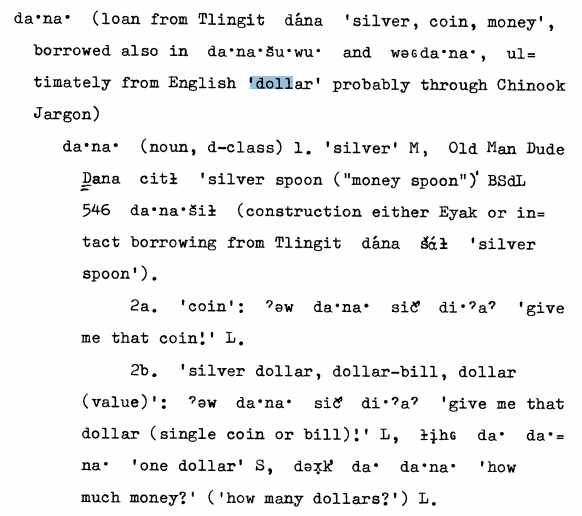 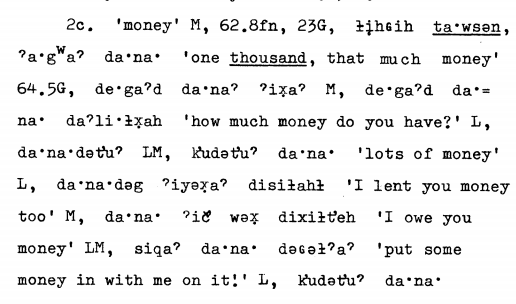 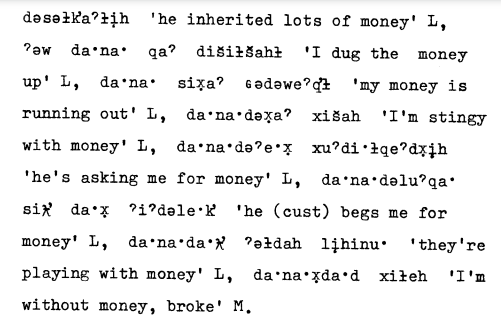 Seen above and in the following snippet, ‘thousand‘ is another widely used loan known in CW; as the majority of the non-Sugpiaq loans in Eyak are more readily connected with Tlingitized CW than with direct English contact, I tend to think the Jargon is rightly invoked here:

One longstanding claim of a CW connection, that of Tlingit ‘cat‘ with Chinuk Wawa, seems quite difficult to me to support. CW pus / push / etc. ought to emerge as something like Tlingit *kwoosh, and in no PNW Coast language should it emerge with a “d” or “t” sound. Is the Tlingit form instead a loan from some Russian endearment for ‘kitty’? Note, the –əma ‘mother’ in Nellie’s name below seems not to be a loanword… 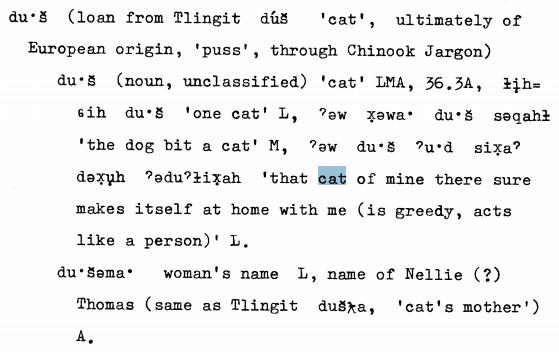 Another word I’ve seen in BC CW, found here in Tlingitized pronunciation and thus more likely CW than English, is ‘silk‘:

A fascinating case is a word for ‘woman; queen‘, pretty clearly from CW łuchmən but clipped down like the late- and post-frontier PNW English slang word klooch; we’ve hardly seen the latter within CW, so this borrowing presumed to come via Tlingit may be rare evidence of Indigenous use of a rather racist term (the native Eyak word for ‘woman’ can be seen below at ‘canned goods’)…

Another word clearly gotten from Chinuk Wawa is ‘Sunday‘, seeing as how its primary meaning looks to be the non-Settler sense, ‘week’:

‘Chinook [Jargon]‘ of course is a borrowed word:

As is ‘Chinaman‘ in a Tlingitized pronunciation of this originally Chinese Pidgin English term, widely distributed in the PNW tribal languages that had significant input from CW. The phrases ‘Chinamen’s whiskey’ and ‘Chinamen’s hat’ may very well be borrowed as well. In the latter, the alternant with a bare stem of ‘Chinaman’ + Eyak č’iyahd ‘hat’ has me wondering if there was a CW phrase like *chaynə-man-siyapuł*. (PNW English place names still include “China hat” and “Chinaman hat”, to be sure.) That č’iyahd ‘hat’ might be one of the remarkably farflung yet similar-sounding words for ‘hat’ in PNW languages, a distribution that has made it hard to pin down the etymology of CW’s word… 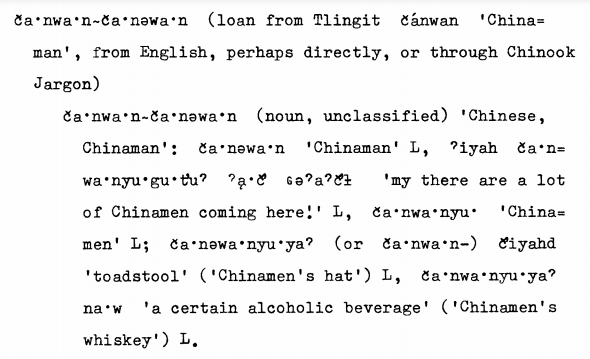 Quite definitely CW is ‘dime‘ from English ‘bit’, in a Tlingitized pronunciation:

Almost equally certain to come from CW is ‘gold‘ in a Tlingit pronunciation of the CW simplification gul: 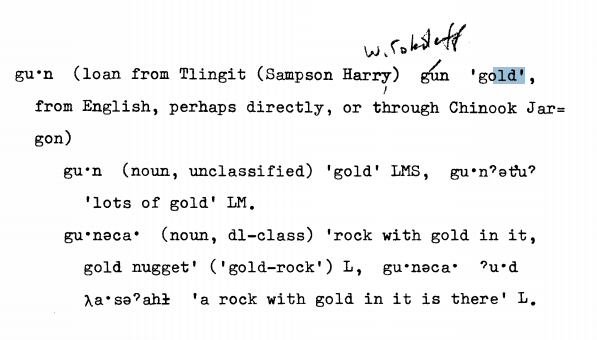 Identical in form to CW is the Eyak word for ‘Japanese‘:

Native to Eyak but influenced by “English” (perhaps actually CW) is ‘Sheep Bay‘: 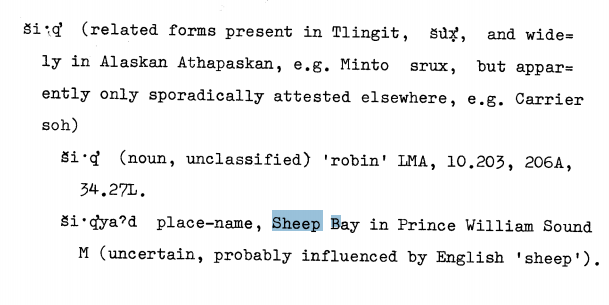 A word we’ve found in association with Chinook Jargon on the north coast is ‘schooner‘:

The CW word ‘Kanaka‘ for Pacific Islanders appears in Eyak, via Tlingit; it’s also applied to darker-skinned Settlers such as Mexicans and Greeks: 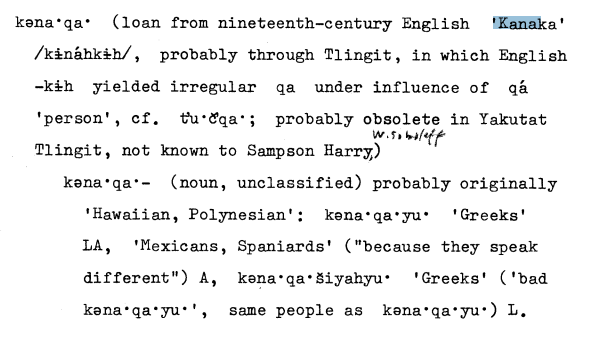 A word known in BC CW is ‘cannery‘ — a place of employment where CW typically was spoken:

Alongside ‘dime’ (already seen above) is ‘quarter‘ from CW: 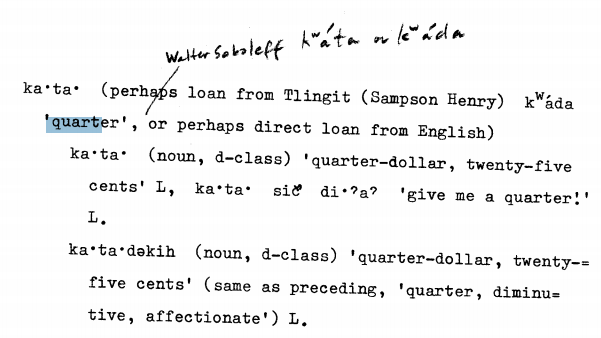 The English word ‘cow‘ is not standard in CW, and cows would’ve been quite a rarity in the Cordova area, so it may be a more recent loan:

The word ‘Filipino‘ is a neat instance where a foreign “L” sound is not Tlingitized to “N”, so this too is more likely a recent English borrowing:

The word for ‘horse‘ is from Tlingit, and must be old because it was recorded by Rezanov (published 1805, before Chinuk Wawa or English were known in the PNW)! It’s likely local English influence, ironically in the form of the borrowing ‘cow’, that pushed this xaas into a narrow meaning of ‘horse’… 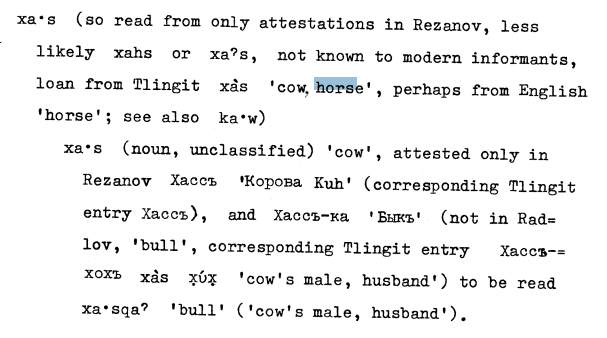 Here’s a map of the original range of the wood bison in Alaska, showing that it was never native to Tlingit land in coastal Southeast Alaska: 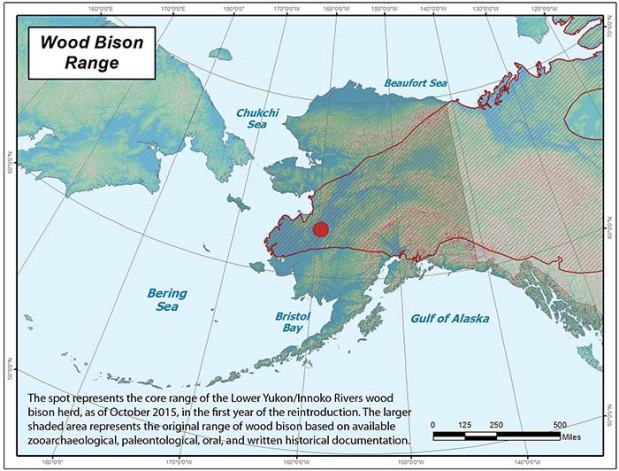 The same is true of the muskox’s original range: 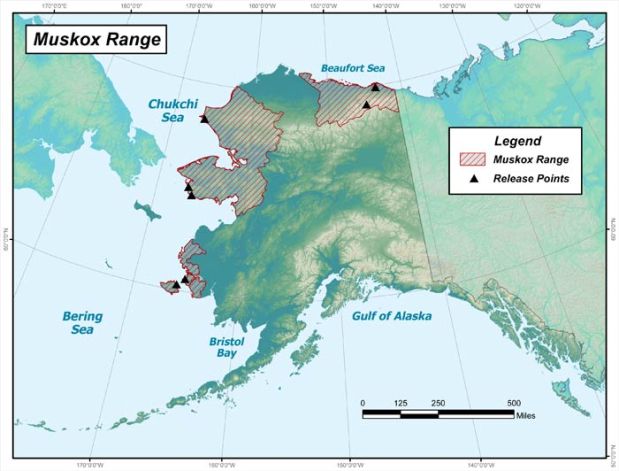 So I doubt this word for ‘horse’ is etymologically anything other than native Tlingit or ultimately Athabaskan, seeing as how Tlingit xaas refers to Alaskan/Canadian fauna including ‘bison, buffalo; ox, muskox’, and English “H” virtually never gets turned into “X” in Indigenous languages.

A word that I’ve found many times in BC Chinook Jargon is ‘machine‘, although the fact that its Eyak form is not Tlingitized to *washiin* suggests a more recent borrowing directly from local English:

This same logic applies when we consider Eyak ‘minutes‘, also with an “M” sound preserved; had the mutation to “W” occurred, we’d have more reason to think that the usual connection to CW via Tlingit had been in play:

Such Tlingit consonant evolution does, however, show up in the identifiably CW word for ‘whiskey‘. 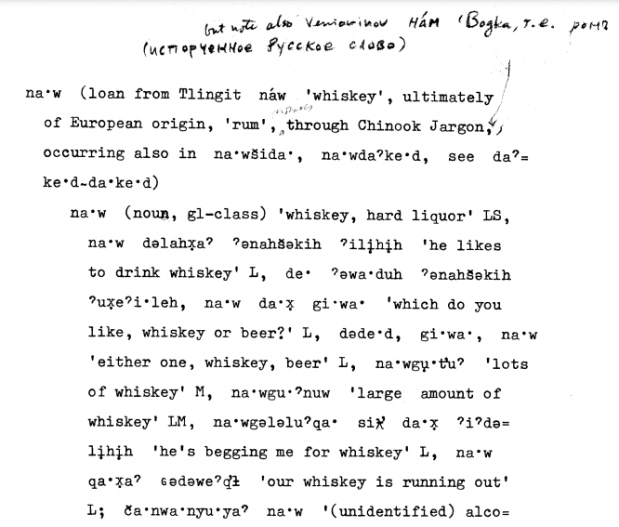 Note also the corroboration up there of a regional idiom, literally ‘women’s whiskey’, for ‘wine’; it may have been a CW expression, seeing how far dispersed it got to be. Patty Whereat-Phillips is the first to have noted that phrase, as you can see in Siuslaw-Quuich way down in Oregon, on her blog! I’m also now noticing that the same metaphor for ‘wine’ shows up in the unrelated Klamath language as ‘old woman’s drink’, documented in Albert Gatschet’s 1890 publication:

But special consideration has to be given to ‘railroad‘, even though it too preserves the “L” sound, because this word was quite well known in BC CW and the Indigenous languages. Tlingit actually has the uniquely BC CW ‘steam car’, but one wonders if Eyaks could have gotten ‘railroad’ via CW somehow; in reality, though, trains were not a feature of the south-central Alaskan landscape until after the frontier era, coming to Cordova after 1906:

Likewise a latecomer and therefore an English loan is ‘radio‘; a naval radio facility began in Cordova in 1908:

The Eyak word for ‘Russian‘ comes from a distinct local English pronunciation as “Rooshan”, and parallel to my reasoning with other “L” words above, I think a connection with CW (via Tlingit) is less plausible:

‘New Year‘ could be via CW, and it’s known in BC CW, but again it’s not documented as far as I know in a Tlingit context, so I’d put it down to local English having a direct effect on Eyak speech:

The word ‘yard‘ (3 feet) may very well have arrived via CW, and I’ve found it in British Columbia usage. Furthermore, a handwritten note by Krauss here points out Tlingit wàd ‘fathom’ (which is more like 6 feet), which I believe may reflect English ‘yard’. There’s some degree of alternation within Tlingit between “W” and “Y” sounds, having to do with that language’s recently lost additional phoneme ÿ (/ɰ/)… 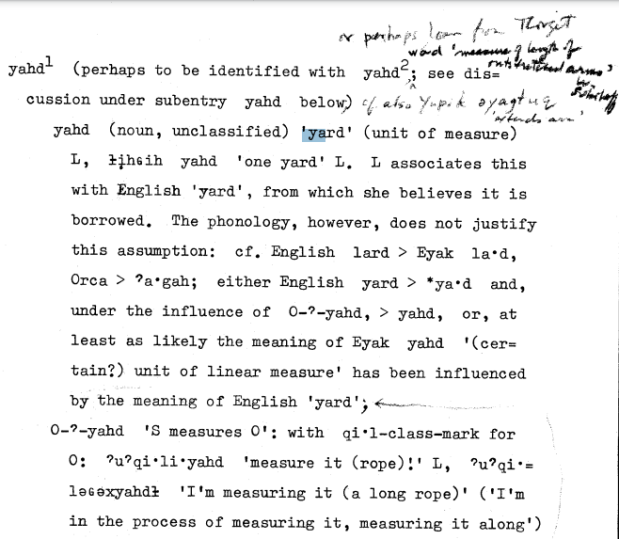 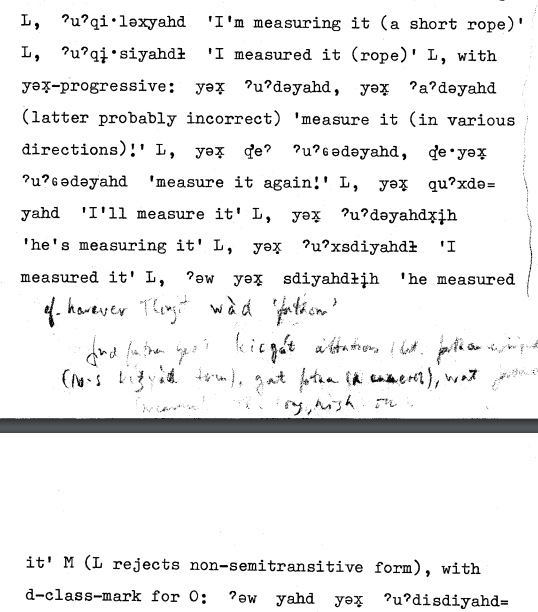 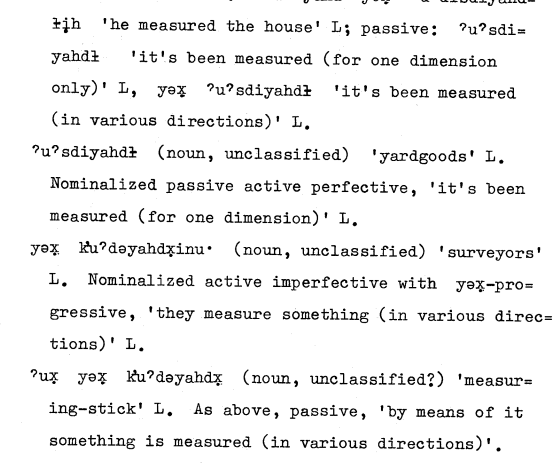 A possible reflection of CW influence is the extremely common PNW metaphor ‘(a short distance) outside the house‘ = ‘urination’, ‘defecation’, also known in Tlingit, here expressed in purely Eyak words: 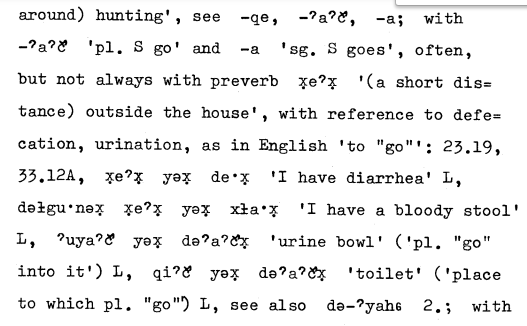 As I was saying about ‘yard’, Eyak ‘navy‘ might show us some Tlingit pronunciation influence. The word here strikes me as possibly tracing to the north coast CW discovery ‘man-o’-war‘ that I’ve shown on my site a number of times, if we can suppose Tlingits mutated “M” to “W” (which is predictable) but then further to “Y” (which is less predictable)…

By now you may realize it’s predictable of me to say ‘umbrella‘ is probably from local English, not from CW, because it doesn’t Tlingitize “L” into “N”…

Likewise we have no particular reason to think ‘air‘ came from any language but English:

A word that’s very often brought into Indigenous PNW languages via CW is ‘apples‘, which however preserves “L” here, so it’s either a direct loan from local English, or else something like English/CW > Tlingit áabíns / áagúns > Eyak > new influence from local English!

The word ‘army‘ is likely straight from English:

Now, ‘orange‘ could have come into Eyak via other sources; it’s certainly of wide occurrence in PNW tribal languages, perhaps showing transmission via the pidgin Chinuk Wawa. But in those languages it’s typically in a form reflecting the English plural, cf. Tlingit áanjís…and what we find in Eyak is definitely the English singular:

Also straight from local English is the exclamation for ‘honest!‘

Summarizing, there’s enough of a CW trace in Eyak to suggest that these folks knew a bit of the Jargon, but primarily through contact with Tlingits and the Tlingit language. It’s relatively easy to distinguish words that are potentially from Chinuk Wawa, but more likely English, in Eyak, because they preserve clearer traces of English sounds.

There is definitely some interesting history to be learned from the CW words in Eyak, for instance in their reinforcement of discoveries from farther south on the NW Coast, such as ‘navy’ and ‘wine’.