Father Le Jeune of Kamloops Wawa heard about The Stenographer’s interest in his shorthand-written Chinook Jargon newspaper, and wrote a letter to the editor…

The Stenographer probably was, or became, one of Kamloops Wawa‘s “exchanges”. That was a custom of the era, in which periodicals swapped copies of each other’s issues. The idea was in part to provide a greater amount of material that each re-publish (with credit given to the exchange source in the form of a thank-you).

Editors of exchange journals also liked to print letters of recommendation from each other. An element of that kind of endorsement can be detected below. 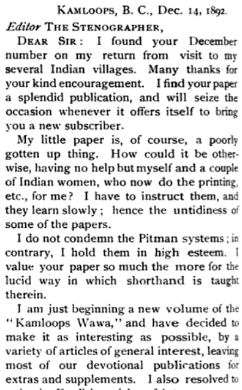 DEAR SIR: I found your December number on my return from visit [sic] to my several Indian villages. Many thanks for your kind encouragement. I find your paper a splendid publication, and will seize the occasion whenever it offers itself to bring your a new subscriber.

My little paper is, of course, a poorly gotten up thing. How could it be otherwise, having no help but myself and a couple of Indian women, wh now do the printing, etc., for me? I have to instruct them, and they learn slowly; hence the untidiness of some of the papers.

I do not condemn the Pitman systems [of shorthand]; in [sic] contrary, I hold them in high esteem. I value your paper so much the more for the lucid way in which shorthand is taught therein.

I am ust beginning a new volume of the “Kamloops Wawa,” and have decided to make it as interesting as possible, by a variety of articles of general interest, leaving most of our devotional publications for extras and supplements. I also resolved to write in English articles of interest to our kind readers. I always put an English title to the items of interest to the natives alone.