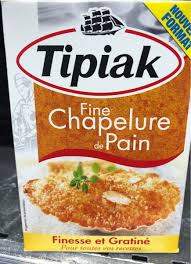 Thanks to my reader Marie-Lucie Tarpent for a comment that inspired this article.

MLT left a note at my recent post about the source of Chinuk Wawa’s word saplél ‘bread; flour’, observing that it’s actually a good match for French chapelure ‘breadcrumbs’. (Also applied to small chips, such as potato flakes.)

I agree with her. Both in its sounds and its meaning, chapelure fits well with our saplél. And it’s been a common word for centuries, not some obscure Canadianism such as we’ve sometimes had to puzzle over.

It’s certainly a stronger correspondence than we get with a previously proposed French source, la farine ‘flour’ — although, interestingly, Father Lionnet, a French speaker, gives  < lafarine > as the Jargon word in his vocabulary published in 1853! (My post on that is what MLT was responding to.)

A different but also flawed French etymological idea here is sablé ‘shortbread, biscuits’. Some speakers in the Grand Ronde community wound up saying the Jargon word for ‘bread; flour’ this way, presumably involving the ongoing presence of French speakers there. But that’s a reanalysis (folk etymology) made after the fact; it doesn’t appear to explain this extremely early Chinuk Wawa term.

I figure the 2012 Grand Ronde dictionary’s etymological note on saplél is correct in saying Lewis and Clark in late fall of 1805 (at the Cascades of the Columbia, in Upper Chinookan territory) found this word already in use “well before the arrival of the land-based fur trade with its French-speaking voyageurs”.

David Thompson’s North-West Company crew was the first in the Columbia Plateau to my knowledge, arriving only in 1807.

Lewis and Clark’s journals have this word spelled variously, as < cha-pel-el>, < shapalell >, and < chapellel > , for example, and referring to a traditional loaf made of pounded biscuitroot (couse) native to that region.

I’ve long supposed that this word is from a Sahaptian language, either Nez Perce or “Sahaptin” (Ichishkíin/Yakama/Walla Walla/Umatilla/other dialects). So it’s with some surprise that I find no indication that that’s true!

So none of the three treats it like an integral, purely native part of their language, and the shortened Umatilla form has me wondering if the word ‘feels foreign’ to speakers.

Here’s an almost purely impressionistic comment for you: in many of the Columbia Plateau languages, especially Salish, a stressed syllable shaped like “L” + vowel + “L” strikes me as quite rare. I can’t easily back that up without doing a ton more phonological research than I want to for this short essay. But just having that feeling pushes me to think, “What languages don’t find a syllable like ll odd?”

Chinookan comes right to mind, what do you know, as a group of languages that freely sequence all kinds of consonants. The Grand Ronde dictionary points out the Upper Chinookan noun a-sáblal in this connection. (Variation between “S” and “SH” sounds is frequent in Chinookan.) And I have a hunch that as we learn more about the structure of nouns in Chinookan — it’s on my own list of research to tackle — we may find that this word indeed has historical roots within that language family.

A separate question for study is, how often did neighboring languages borrow Chinookan words and remove the gender prefix from them? There’s virtually always such a prefix in Chinookan nouns; that’s what the a- is on a-sáblal. We’d need to show that this affix-stripping “was a thing”, to support a claim of a Chinookan origin for this word.

Circling back to our starting thought now: did French chapelure ever get associated with saplél? To that I say, why not! Maybe within the multilingual creole-Jargon community, chapelure as well as sablé and even la farine could easily have been mental associations of this word for the many who spoke French.

I don’t see any good case to be made, though, for any French word being the source of saplél. Chapelure and sablé in particular are weak candidates because they lack the definite article la/le/les that marks nearly every Chinuk Wawa noun from French.

← Mox Boarding House?
Why x̣áwqał isn’t an adverb, & why that matters →