Brace yourselves, here comes the longest, most pissed-off footnote ever published on my site 🙂

This mini-series has been working its way through a little booklet of Protestant hymns translated into Chinuk Wawa in the later 1800s.

We’ve been seeing some decidedly mixed results of their labours in the distant vineyard of our Lord etc.

Here is the Chinook Jargon lyric of another Methodist-Stó:lo hymn, annotated by me & with a notes and some discussion following. (Note — CJ pronunciations marked with an asterisk are ones we can’t verify from other Jargon sources.) 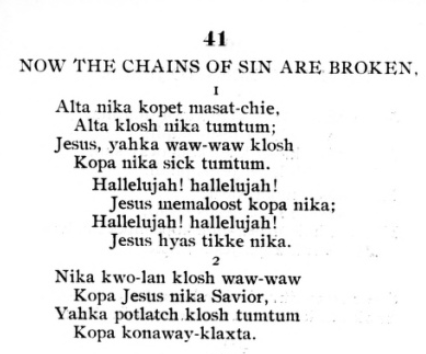 NOW THE CHAINS OF SIN ARE BROKEN.

Comments on the Chinuk Wawa lyrics:

kúpit masáchi, [1] n … yaka wáwa łúsh [1] … (t)łúsh wáwa [1] kʰupa djísəs*– All three of these phrases involve words that aren’t usually nouns, and all are unusual ways of using those nouns, as I gather from the original English that these translators were working off of (see below).

halelúya*! [2]  … séyvia*, [2] — These words aren’t well documented elsewhere in Chinuk Wawa. The Kamloops Wawa‘s Father Le Jeune often has < alilyuia > for the first one, probably telling us more about his native French pronunciation than about CW. “Saviour” shows up elsewhere in Jargon, too, but it’s in these same guys’ — specifically CM Tate’s — “St Marks Kloosh Yiem” (Gospel of St Mark) booklet. So, not the greatest corroboration there either.

nayka q’wəlán (t)łúsh wáwa kʰupa [3] djísəs* — I started commenting on this expression in note 1. I want to discuss it separately from the issue of the translators’ recurring odd use of Jargon words as nouns. This is a very hard phrase for a fluent speaker to make sense of without knowing the English original lyrics (below). Here’s the deal. These 6 words, taken at face value, sound like ‘my ears talk nice to Jesus’! To make the second word more clearly a verb ‘to hear’, the translators could have prefixed it for example with hayu- ‘much’, giving a sense ‘I am hearing’ (and obviously not the literal ‘my many ears’!); or else with mamuk-, resulting in ‘I listen to’. Such edits would then make it natural to understand (t)łúsh wáwa in the intended way, as a noun ‘good words’. *BUT THEN* comes this kʰupa djísəs*, which any fluent Chinuk Wawa speaker would take as ‘to Jesus’. Are you following this? We currently have a translation of their CW phrase as ‘I’m hearing the good words to Jesus’. Which is nonsense, unfortunately. Once you refer back to the 2nd verse of the English original, you can figure out that they were thinking (in English) ‘I’m hearing the good words of Jesus’ — but the problem is, in CW, you never ever absolutely at all express possession that way! No fluent Jargon speaker said ‘the good words of Jesus’ as (literally) ‘good words to Jesus’. At this point I’ve reached full ranting steam 🙂 It blows my mind how a team of 3 educated men could faily so utterly to learn basic grammatical CW. My readers may recall previous installments in this mini-series where I pointed out that these missionaries were also fond of another weird possessive construction, saying literally ‘Jesus blood’ (for example) in Jargon for ‘Jesus’s blood’. How is it that Father Blanchet learned Jargon with beautiful fluency in a couple of months upon arriving at Fort Vancouver, and yet these 3 fellas with the benefit of half a century of published reference resources failed to grasp the language? These three give the impression, in fact, of insisting on talking Jargon in their own, heavily literary-English-influenced, way. (Just wait till I write about “St Marks Kloosh Yiem” in any detail, ouch.) Frankly I see the difference as cultural; the Canadian priests reacted to Indian languages by trying to speak them as the Indians spoke them; the British preachers look to have reacted to Jargon by trying to correct it!!!!!!!! In the name of fairness I’ll have to show you some Catholic hymns in Jargon that were also used on the lower Fraser River, to test my implied claim that those were more grammatical and easier to understand.

Summary of the Chinuk Wawa lyrics:

Today’s sample is surely one of the worst Chinook productions by the Fraser River Methodist Mission. Shaky grammar makes a song into a poor tool for teaching folks about your foreign religion.

The above can be compared with Elisha A. Hoffman’s original English lyrics for the first two verses and the chorus. You’ll be able to see how very broadly the missionaries translated this into Jargon; it would be impossible to “back-translate” into English and have much chance of identifying which exact hymn was translated in the first place!

Now the chains of sin are broken,
I am free, I’m free;
Christ the word of power has spoken
Unto me, to me.

Soon as I by faith received him
Fled the night, the night;
In the moment I believed him
Came the light, the light.

← 1836-38: Herbert Beaver as an observer of Fort Vancouver
Letters of Dr. John McLoughlin →