1836-38: Herbert Beaver as an observer of Fort Vancouver

Iconic (from the frontispiece)

But in the Introduction to the book I’m looking at today, its editor makes clear that Reverend Beaver was a terrible choice as a missionary to the Indians, and made virtually no contact with the tribes.

My impression from his own words in the book I’m reading is that he was an un-Christian savage, a raging jerk who thought his shit didn’t stink — a thoroughly modern mindset that we see too much of in the daily political news.

I’m talking about “Reports and letters, 1836-1838, of Herbert Beaver, chaplain to the Hudson’s Bay Company and missionary to the Indians at Fort Vancouver“, edited by Thomas E. Jessett ([Portland, Or.] Champoeg Press, 1959).

On page 4 (in 1836), Beaver adopts the, ah, interesting stance of simultaneously pontificating about Chinook Jargon’s supposed inferiority and boasting that he knows nothing about it! This contrasts with the efforts of other early missionaries on the lower Columbia like Lionnet, Blanchet, Demers, Lee, and Frost. So take the following with liberal salt:

Relative to the instructions to be imparted to the neighbouring Indians, I can of course, at present say but little. Their numbers have been of late years much thinned by disease. Their tribes are numerous, much scattered, and speak different languages. There is, however, one language, the Chinook [Jargon], which is partially under- stood by nearly the whole; but I much fear, were I ever to be- come a master of this language, which would be no very difficult task, as far at least as foreigners usually understand it, that it is too defective for the conveyance of Christian ideas.

More useful than that “information” is page 13’s 1836 letter from local Protestants asking Beaver not to flee back to England in one of his snits, as it carries a postscript from French speakers asking for religious services in their language because they don’t understand English well. This same French Prairie community is well known in history as asking for years for a Catholic missionary to be sent from Canada (which didn’t happen until 1838), so this shows how very much they hoped for some spiritual leadership:

Signed by thirty four Protestants We the undersigned of the Roman Catholic Community here- by testify our full concurrence in the foregoing petition, and moreover we are desirous that the Revd Mr. Beaver should perform divine service in the French language for our benefit as few of us sufficiently understand the English. Signed by twenty four Roman Catholics, and among them by “David Dompier”, who officiates for them.

Page 23 has Beaver observing, this time accurately, that the Roman Catholic i.e. French population is mostly illiterate, a fact that he doesn’t realize has a great deal to do with their receptivity to using a pidgin-creole in daily life:

The Roman Catholic population is very illiterate. Out of the whole, but one, “David Dompier”, can read or write. You will perceive his name affixed to the petition for my remaining here and performing a service to them in their own language. He is the person obliged by Dr. McLoughlin to teach and read to the others on the Sabbath day, and also to catechise the children every day, after four o’clock. He dislikes the office, and would give it up, if he dared.

Also revealing is the passage on page 38 where Beaver shares some Chinuk Wawa words with the folks back at HBC headquarters in London. He again voices his suspicion (already a well-known fact to others; see George Lang’s book “Making Wawa”) that the Indians have a secret(?) language separate from CW. The persistent misspelling of tənəs- / tənás with a “P” shows that either editor Jessett or Beaver is misreading a written source. Beaver does reinforce the common observation that CW was often accompanied by hand gestures: 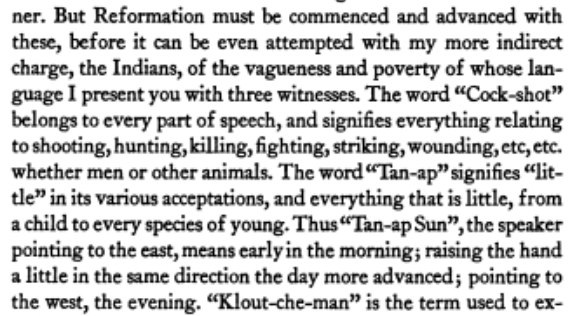 But Reformation must be commenced and advanced with these, before it can be even attempted with my more indirect charge, the Indians, of the vagueness and poverty of whose language I present you with three witnesses. The word “Cock-shot” [kákshit] belongs to every part of speech, and signifies everything relating to shooting, hunting, killing, fighting, striking, wounding, etc, etc. whether men or other animals. The word “Tan-ap” [tənəs- / tənás] signifies “little” in its various acceptations, and everything that is little, from a child to every species of young. Thus “Tan-ap Sun“, the speaker pointing to the east, means early in the morning; raising the hand a little in the same direction the day more advanced; pointing to the west, the evening. “Klout-che-man” [łúchmən] is the term used to express the whole female sex, in whatever degree of relationship, whether rational or irrational. But I am of the opinion that they speak a language among themselves, different from that which they use to us.

On page 40, Beaver’s ignorance of Native life has him claiming “Wapatoes” (a CW word) are the only vegetable Indians eat:

They have lost the custom of clothing themselves with skins, and generally wanting expertness at the bow, they are dependent, with the exception of fish, on a supply of powder for food. Agriculture in toto is un- known among them; and “Wapatoes”, a spontaneously growing bulbous root, not unlike the “Eddae” of the West Indies, with berries of several species, form their only vegetable diet.

When Beaver sniffily repeats a rumor as his only information (because he’s made himself unwelcome throughout the Fort Vancouver community) about James Douglas & William Fraser Tolmie reputedly teaching Indians Christian prayer “in their own language”, he probably doesn’t quite realize he’s telling us about Chinuk Wawa (page 84, in a long ranting letter):

About the beginning of the year, Messrs. Douglas and Tolmie commenced a sort of Sunday School for Indians of all ages in the school room. I hear (for I have never been requested to attend) that they endeavour to teach them a prayer in their own language; but I much fear, that without other instruction, which cannot be given till we either know it better, or can teach them our own, any attempt at conversion must be futile, and amount to no more than the ignorant worship of an unknown God, who requires his rational creatures to worship him in spirit and in truth.

These few clippings are just about all I find to report to you that touches on Chinook Jargon in Beaver’s ignorant and temperamental correspondence.

Even an unpleasant fool can tell us a little something useful, though, and this man is an example; his words, sometimes unwittingly, bolster our knowledge that CJ was constantly in use for a million functions around Fort Vancouver, and that’s worth knowing.