…and we actually learn a couple of new facts.

Whenever some editor, or for that matter a random curiosity-seeker, far from Kamloops would write to Father Le Jeune asking for information, he would typically oblige them with plenty of facts.

Below, I’m reproducing images of the full article, then translating the French parts of it. 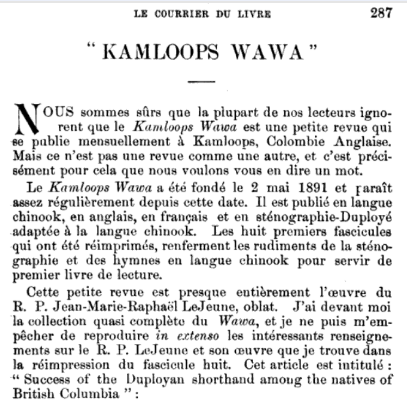 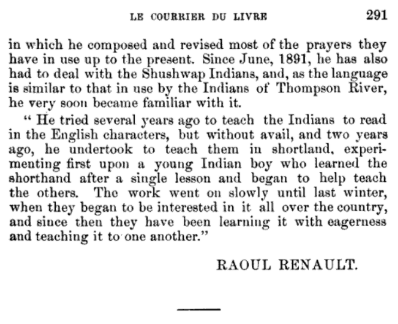 (We are sure that most of our readers are unaware that Kamloops Wawa is a small magazine that is published monthly in Kamloops, British Columbia. But it’s not a magazine like any other, and that’s exactly why we want to say a word about it.)

(Kamloops Wawa was founded on May 2, 1891, and has appeared fairly regularly since then. It is published in Chinook, English, French and Duployé shorthand adapted to the Chinook language. The first eight booklets, which have been reprinted, contain the basics of stenography and hymns in Chinook for use as the first reading book.)

(This little magazine is almost entirely the work of Reverend Father Jean-Marie-Raphael LeJeune, Oblate. I have before me the almost complete collection of Wawa, and I can not refrain from reproducing in extenso the interesting information on R. LeJeune and his work which I find in the reprint of fascicule eight. This article is titled: “Success of the Duployan shorthand among the natives of British Columbia”: )

“The Duployan system of stenography made its apparition in France in 1867. The originators are the Duployé brothers, two of whom are members of the clergy and two others cminent stenographers in Paris. Father Le Jeuue became acquainted with the system in 1871, being then 16 years old, and learned in a few hours. Two or three days after he wrote to Mr. E. Duployé and by return mail received a very encouraging letter. Ile found the knowledge of shorthand very profitable ever since, either for taking down notes or for correspondent. It was in July, 1890, that the idea first came to try shorthand as an easy phonetic writing for the Indians of British Cohnnbia. The first trial became a success. At the end of Septeniber, 1890, a poor Indian cripple, named Charley-Alexis Mayoos, fiom the Lower Nicola, saw the writing for the first time, and gotthe intuition of the system at first. He set to decipher a few pages of Indians prayers in shorthand. In less than two months, he learned every word of them, and he soon began to communicate his learning to his friends and relatives.

“Through his endeavors some eight or ten Indians at Coldwater, Nicola, B. C, became thoroughly acquainted with the writing system before April 1st, 1891. In July, 1891, the first lessons were given to the Shushwap Indians; they lasted an hour every day for four or five days. Three or four of the best young men went on studying what they had learned, and were delighted to find themselves able to correspond in shorthand in the early fall. During the winter months they helped to propagate the system of writing among their people. In the meantime Mayoos had gone to Kamloops and was pushing the work ahead among the young people there.

“In December, 1891, the system was introduced to the North Thompson Indians; in January, 1892, to those at Douglas Lake; in February at Spuzzum and North Bend; and, last of all, in March, to those of Deadman’s Creek, near Sarvina [Savona]. Soon after, Indian letters came from William’s Lake. In May, 1892, a few lessons were given at St. Mary’s Mission to the Lower Fraser and seacoast Indians. Now the Indians teach each other and are very anxious to learn on all sides. The most advanced understand the value of letters and the spelling of the words; but the greater number begin by reading the words, then learn the syllables by comparing the words together, and at last come to the letters. They learn by analysis and much quicker than by synthesis.

“The Kamloops Wawa was first issued in May, 1891, and in eight monthly numbers gave the rudiments of stenography and the Chinook hymns as first Chinook reader.

“With No. 9, February 1st, 1892, it has become weekly, and has ever since continued to reach every week the increasing number of subscribers.”

(In January 1895, the Wawa entered its fourth year of existence. On this occasion, Reverend Father Le Jeune was doing a review of the past: )

“It is now three years and six months since the first appearence of the Kamloops Wawa, May 2nd, 1891. Of this issue, only 100 copies were distributed; the most of which had to be given away, there being very few persons with interest enough in the publication to otter their subscription. The paper had even to be discontinued after 4 months, until Feb. 2nd, 1892, when it reappeared as a weekly letter of four pages, this idea having been suggested by multiplied correspondence among the Indians. The first week 50 copies were issued, the following week 75, then, 100; and so on to 200, which number was the limit reached until January 1st, 1893, when it was increased to 300, and continued on this scale until March, 1894, when 500 had to be printed, and at last 1200 from May till Dec, 1894.

“Kamloops Wawa now begins its fourth year with a monthly circulation of 2000 copies.”

(In January 1896, the Wawa grew in proportion: each delivery contained engravings, music, stenographic lessons and news. The December 1897 issue reached us some time ago, bringing us its Happy New Year wishes, and thanking its subscribers for their encouragement.)

(In this issue we find a calendar for the use of the Indians, we reproduce it entirely as a curiosity: )

[An image of it appears here]

(The Wawa now forms six volumes in-16 [sextodecimo book size]. It contains a lot of interesting things. And even if it is only for curiosity, Canadian and American bibliophiles should get a series. In a few years, the collection of this little magazine will be worth its weight in gold. Volumes II, III, IV, V, VI are available; as for volume I, it has been exhausted for a long time.)

(Reverend Father Le Jeune has published several small books for the instruction of the savages of his mission. We will mention, among others, the following: )

(These different volumes are available at 25 to 50 cents each.)

(We can not close this little study better than by reproducing in full the biographical note that M. J.-C. Pilling devoted to R. Le Jeune in his Bibliography of the Chinookan languages: )

“Père Jean-Marie Raphaël Le Jeune was born at Pleybert Christ, Finistère, France, April 12th, 1855, and came to British Columbia as a missionary priest in October, 1879. He made his first acquaintance with the Thompson Indians in June, 1880, and has been among them ever since. He began at once to study their language and was able to express himself easily in that language after a few months. When he first came he found about a dozen Indians that knew a few prayers and a little of a catechism in the Thompson language, composed mostly by Right Rev. Bishop Durieu, 0. M. I, the present bishop of New Westminster. From 1880 to 1882 he travelled only between Yale and Lytton, 57 miles, trying to make acquaintance with as many natives as he could in that district.

Since 1882 he has had to visit also the Nicola Indians, who speak the Thompson language, and the Douglas Lake Indians, who are a branch of the Okanagan family, and had occasion to become acquainted with the Okanagan language, in which he composed and revised most of the prayers they have in use up to the present. Since June, 1891, he has also had to deal with the Shushwap Indians, and, as the language is similar to that in use by the Indians of Thompson River, he very soon became familiar with it.

“He tried several years ago to teach the Indians to read in the English characters, but without avail, and two years ago, he undertook to teach them in shorthand, experimenting first upon a young Indian boy who learned the shorthand after a single lesson and began to help teach the others. The work went on slowly until last winter, when they began to be interested in it all over the country, and since then they have been learning it with eagerness and teaching it to one another.”