Ugh! So these 2 white women decide to write fiction about Indians…

This is just a short note about a literary use of Chinook Jargon.

It’s a paradoxical one, because it’s made-up, but made up by two authors who were really familiar with Chinuk Wawa.

Frances Fuller Victor (1826-1902) was a very important early historian of the Pacific Northwest.

Her careful and knowledgeable work, which the much wealthier historian Hubert Howe Bancroft of California bought from her and published under his own name, remains a major source of our understanding of frontier times out here.

She had a good working knowledge of Chinuk Wawa, as far as I’ve been able to determine.

Mrs. Victor, typical for a highly literate person of her time, also wrote poetry and stories.

You might enjoy her book “The New Penelope, and Other Stories and Poems” (San Francisco, CA: A.L. Bancroft & Co., Printers: 1877).

Her acquaintance with Jargon makes itself evident in her creative writing.

Her story “A Curious Interview” (pages 80 and following) is realistic in style — in fact, at first I was ready to write about it as an example of quoted Jargon speech. I can’t say it’s fiction 100% for sure. Was there reallyl a person known as “Chief Nittinat” on Vancouver Island, Canada?

And the big giveaway by my standards is that she has Indians saying “Ugh!” In 19th-century writing, that’s usually a stereotype, not necessarily a reflection of real speech habits. (Linking to one grad student’s meditation on “Why Indians Say “How” and “Ugh””.)

My 2 cents says, yes, maybe “ugh” is an attempt at spelling a real interjection, such as the widely occurring ʔá (“ah”) for ‘yes’ in the Northwest — BUT — we have no indication that Native folks threw random “ugh” sighs into their sentences, the way “Chief Nittinat” and all stereotypical literary Indians do.

Further proof that “ugh” is a stereotype is that indeed, it seems to crop up primarily in fiction. The first example of associated with Chinuk Wawa that I was able to find a newspaper search is in a serialized story by regional author and Susan B. Anthony protégé Abigail Scott Duniway (1834-1915). 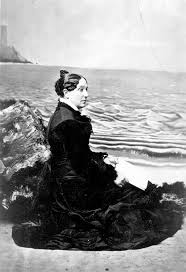 She, ironically, pushes back against other stereotypes of Natives and leaves her Jargon untranslated to draw its late-frontier readers into an atmosphere of veracity: 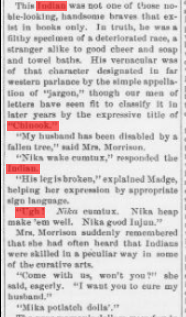 This Indian was not one of those noble-looking, handsome braves that exist in books only. In truth, he was a filthy specimen of a deteriorated race, a stranger alike to good cheer and soap and towel baths. His vernacular was of that character designated in far western parlance by the simple appellation of “jargon,” though our men of letters have seen fit to classify it in later years by the expressive title of “Chinook.”

“My husband has been disabled by a fallen tree,” said Mrs. Morrison.

“His leg is broken,” explained Madge, helping her expression by appropriate sign language.

Mrs. Morrison suddenly remembered that she bad often heard that Indians were skilled in a peculiar way in some of the curative arts.

“Mika potlatch dolla’ [You give money].“

At all events, “The New Penelope” seems to be an effort by Mrs. Victor to reach a popular audience and make some much-needed cash. (See her biography on Wikipedia.) Still, she’s a very good writer!

What do you think?
Kahta mika tumtum, Ugh!?

5 thoughts on “Ugh! So these 2 white women decide to write fiction about Indians…”