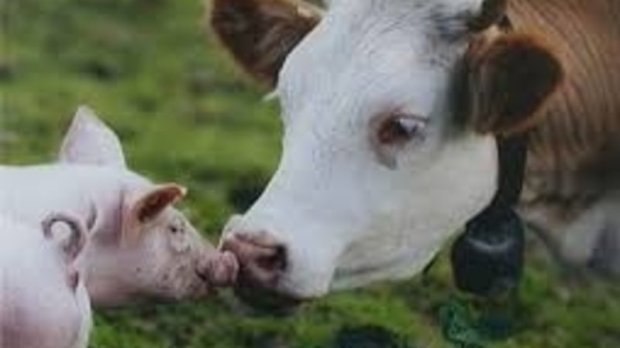 …I have a modest observation about domesticated animals.

A very small set of words for these normally have no article in Jargon; I can only think of two:

The other domesticated animals have Jargon names with articles:

An analysis I want to put forth is that we see here a functional split:

‘Cows’ and ‘pigs’, you could argue, are primarily kept for their meat, which in fur-trade days you could carry in salted/dried form on your long forays cross-country.

Perhaps both made their first appearance in the Pacific Northwest in the form of such viands.

In French, my understanding is that you’d refer to a serving ‘of pork’ or ‘of beef’ — une portion de boeuf / de cochon — but not ‘of the pork/beef’.

The remaining animals could be understood, by contrast, as valued for their products:

‘Sheep’ give wool that makes much-needed clothing, as the nearest manufacturing centres to, say, Fort Vancouver were a couple thousand miles of wilderness away.

‘Chickens’ were more valued for supplying eggs (leshaf) — we constantly find these noted as astronomically valubable on the frontier — than for their meat, which remained a rare treat long past frontier times.

‘Roosters’ were perhaps not considered terribly good eating in any case, and they served to increase the population of chickens.

‘Mules’ were working animals, as were ‘horses’.

All of these animal words are pretty old in Jargon; I find them in Demers & Blanchet’s 1871-published document of late 1830s Fort Vancouver Chinuk Wawa.

Honestly, I can’t at this writing come up with an airtight set of discourse considerations (i.e. use in real-world speech) that would account for the lack of definite articles on ‘pig’ and ‘cow’. But maybe I’ve started a train of thought…

← ísik-stík is ash, not elm, and it’s creole CW
húyhuy ‘trade’ as a Canadian French word →

4 thoughts on “French-C.W. domestic animals without articles: A modest proposal”