A woman is a “good man” and Chinook was invented by the HBC!

Two linguistic myths in one article, one old, one new!

I’m referring to “Sketches in Vancouver Island” by Capt. Howard Hulbert, who may be the Howard S. Hulbert who authored a few books we can still find in libraries. Hulbert was an ongoing contributor of far-flung travel pieces to Ballou’s Monthly Magazine in the 1880s.

The oldie in today’s piece (XLVII(3):241-244, September 1878) is a variation on the old saw claiming Chinuk Wawa was “invented by” the Hudsons Bay Company; here, we’re told the milder and therefore more accurate variation, that the HBC “introduced” the Jargon: 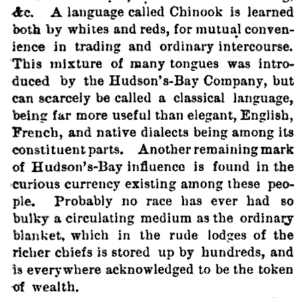 It’s actually fairly accurate, in the case of Vancouver Island, to think of the HBC as having brought Chinuk Wawa up there in the big shift of its base of operations northward from Fort Vancouver, Washington. The Jargon had not been a major force in the V.I. region prior to that.

The new idea here is an inaccurate etymology of the word for ‘woman’:

Wow! < Cloochman > just means ‘woman’, right back through Nootka Jargon and to the original Nuuchahnulth (NCN) language. Any idea of it being connected with ‘man’ comes from English speakers, who reanalyzed the original NCN łuucma as if it were a version of English woman.