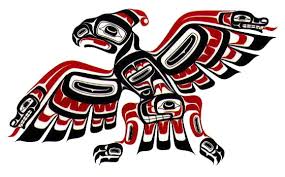 (Image credit: Story of the Chinook)

Today, a supernatural being in Alaska joins the conversation.

A hunter from Daxē‘t was once overtaken by a thunderstorm and
was blinded by a great flash. When he finally looked up he saw a big
thunder bird astride of a mountain. It had the general appearance of
an eagle. Another time some Sitka people out in a choppy place in
the ocean heard thundering going on in a certain direction and, repair-
ing to that point next day, found a whale lodged in the trees with
claw marks on it. A Russian vessel was almost carried away by one
of these birds because the sailors had made fun of it. A certain man
was hunting on the mountain Xās. When he reached the top, he
saw a dark cloud and heard some one talking to him very plainly in
the Chinook jargon. This was a thunder bird and he became very rich
from having heard it, and this is why people believe it exists. People
also become rich if they merely catch sight of it. (page 454)

← A Tlingit Jargon-English genre, the skookum board
Four eyes →