A Tlingit Jargon-English genre, the skookum board

When I was researching in southeast Alaska, local museum folks referred to “skookum boards“ to mean the plaques sometimes found on the fronts of Native bighouses in Alaskan Tlingit territory soon after the USA assumed power.

These were a genre of their own — typically in English verse, but with Chinook Jargon words used, and proclaiming the virtues of the head man of the house. The examples I’ve seen look to have been composed and written by Whites, and they bear traces of racist humor.

The above postcard by renowned SE AK photographers Winter & Pond immortalizes the Tlingit leader known as Saginaw Jake of Killisnoo, together with his skookum board which proclaims:

By the Governor’s commission,
And the Company’s permission,
I am made the Grand Tyhee
Of this entire Illahee;
Famed in song and story,
I’ve attained the height of glory;
As Saginaw I’m known to fame;
Jake is but my common name.

(A similar genre of signs existed in Kwakwaka‘wakw/Kwakiutl territories at the same era, but those were more like advertisements inviting White people to come and trade. The image above from Xwamdasbe, if you can embiggen it sufficiently, shows this.)

I have not found the phrase “skookum board” in print, but it is parallel in structure to another Alaskanism, the Jargon “skookum paper” (skúkum pípa) for a written character evaluation provided by a White person to a Native one. (I know of skookum papers as far south as Makah territory in Washington State, though I suspect those may have been obtained during sealing voyages in Alaska.) The upshot is, both skookum board and skookum paper may have been current local terms in CJ and/or English.

You could justifiably expect laplash for ‘board’ as found in more southerly (i.e. core) Chinuk Wawa dialects, but as we find time and time again, the pidgin’s vocabulary contracted with each surge into new territory, then was replenished with local English. so, board.

What I wanted to get around to sharing with you today is a skookum board that I’d never known of. This turned up in Charles Warren Stoddard’s book “Over the Rocky Mountains to Alaska” (St. Louis, MO: B. Herder, 1899). 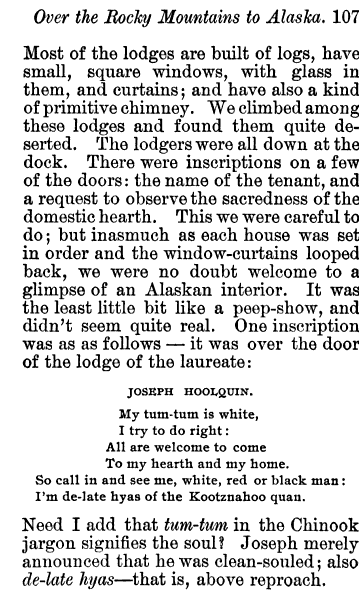 Killisnoo is situated in a cosy little
cove. It is a rambling village that climbs
over the rocks and narrowly escapes be-
ing pretty, but it manages to escape.

Most of the lodges are built of logs, have
small, square windows, with glass in
them, and curtains; and have also a kind
of primitive chimney. We climbed among
these lodges and found them quite de-
serted. The lodgers were all down at the
dock. There were inscriptions on a few
of the doors: the name of the tenant, and
a request to observe the sacredness of the
domestic hearth. This we were careful to
do ; but inasmuch as each house was set
in order and the window-curtains looped
back, we were no doubt welcome to a
glimpse of an Alaskan interior. It was
the least little bit like a peep-show, and
didn’t seem quite real. One inscription
was as as follows — it was over the door
of the lodge of the laureate:

My tum-tum is white,
I try to do right :
All are welcome to come
To my hearth and my home.
So call in and see me, white, red or black man :
I’m de-late hyas of the Kootznahoo quan.

Need I add that tum-tum in the Chinook
jargon signifies the soul? Joseph merely
announced that he was clean-souled ; also
de-late hyas — that is, above reproach. (pages 106-107)

Your mileage may vary when it comes to Stoddard’s Chinuk Wawa translation skills. If he weren’t around to translate for me, I’d take de-late hyas as “the very big (man)” of his tribe.

That tribe’s name, Kootznahoo quan, is a rendering of (thanks to Wikipedia):

I go into this much detail about the indigenous name not only out of respect, but also because hoochinoo (to give another of its spellings) was sometimes claimed to be a Chinook Jargon word. It’s generally conceded that this was the source of colloquial English “hooch” meaning ‘moonshine alcohol’.

You learn something every day.

2 thoughts on “A Tlingit Jargon-English genre, the skookum board”