A couple of generations past the frontier era, a kid who spoke Chinuk Wawa was worth a news article. 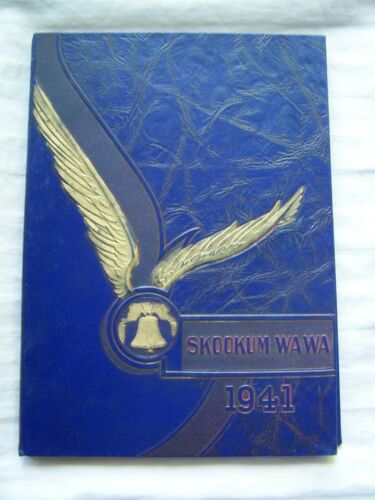 The little boy we’re talking about lived in the CW heartland, in southwest Washington, where the language remained better-known thatn in other areas.

Nonetheless, his dad was rightly worried that the Jargon was dying out. That’s why he taught his son Chinook.

Confirming silently that Chinook Jargon was mostly a mere memory and not needed in daily use, the Spokane (eastern Washington) newspaper needed to provide translations of the quoted samples.

It also ran a headline that’s as much a Hollywood stereotype of Native Americans’ pidgin English as it is legitimate Chinuk Wawa.

And half of the CW that’s quoted, albeit minimal, is of questionable quality. 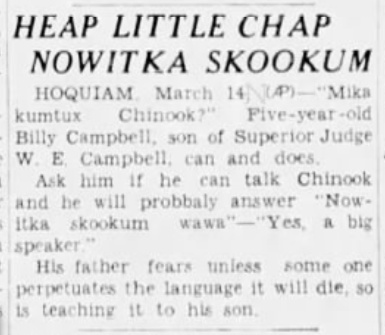 Ask him if he can talk Chinook and he will probably answer “Nowitka skookum wawa” — “Yes, a big speaker.”

His father fears unless some one perpetuates the language it will die, so is teaching it to his son.

Both occurrences of skookum (skúkum) here are the Settler English usage of the word, meaning ‘excellent’. Within Chinook Jargon itself, this word means ‘strong’, and skúkum wáwa is ‘shouting, yelling’, etc.

← 1900: The Northwest Jargon + William Jennings Bryan
1889: Another Chinook interpreter in BC court (and “Second Charlie”?) →