Palmer, who was born a Canadian Quaker but went on to settle in Oregon and to be an Indian agent in Oregon, having plenty of contact with Indigenous people, knew early-creolized lower Columbia River-region (southern dialect) Jargon well.

He negotiated 9 treaties with tribes of the region, for instance, which would’ve exercised his language skills a great deal.

His book includes one of the earliest published vocabularies of Chinuk Wawa, in fact (pages 130-136) — thus, the spellings are his own, and not plagiarized from other publications, as happened so often in later years’s CW lexica.

But Palmer’s CW word list is horribly marred by misspellings. Have a look at a sample from page 130: 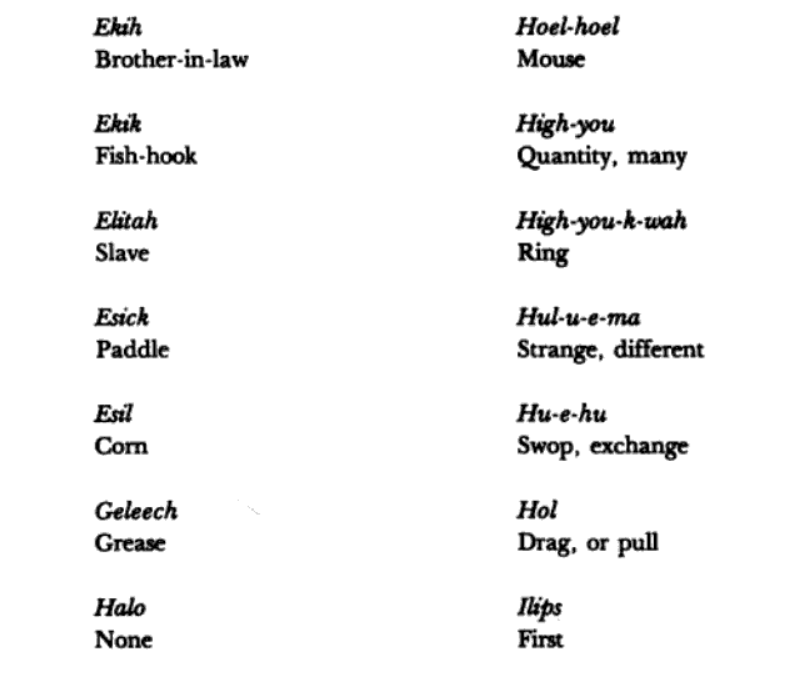 In this small selection, we find:

These are not his fault, directly; since many are nonsensical (such as < kutt > for q’ə́l ‘hard’), we can tell that they’re misreadings of his manuscript by the typesetters back East, who couldn’t have been expected to know anything about CW yet.

By implication, Palmer’s handwriting wasn’t all that great, I guess. I wanted to see his original manuscript of this material, or at least a sample of his penmanship, so I went to Dr. David Lewis’s superb blog, NDNHistoryResearch, and found this:

That’s actually not that bad! There are plenty of other typos in the rest of the book, so a third interpretation might also be relevant: maybe the printer’s devil wasn’t a highly literate boy.

For more about Palmer’s CW vocabulary (which was partly plagiarized by Theodore Winthrop 1863), you can track down a copy of Samuel V. Johnson’s 1978 dissertation and read pages 57-61.

A different sort of linguistic note can be made here. Palmer spells ‘canyon’ as < kanyon >, which goes to show you that this borrowing from Mexican Spanish was quite new still in the 1840s. (As was ‘coyote’ and so forth.)

Okay: not to disappoint you too much, but Joel Palmer makes few comments about Chinuk Wawa in this book.

Most of this memoir is devoted to passing along observations that will be useful to future immigrants from the USA, which at that time lay on the other side of the Rocky Mountains. Sober as a Quaker, Palmer scrupulously reports every variation in soil type, terrain layout, vegetation and timber, and the differing prices demanded for the same goods at different locales — you name it.

Ethnographic information, though, seems to have not struck him as being of future value!

Nevetheless, there are some noteworthy cultural details. Page 49 brings a conversation between a Cayuse chief called Aliquot and Palmer, where the former says in apparent English, “Captain — Captain — no good; no good”, in reference to some supposed Christians playing cards.

That same page shows us that the Grande Ronde in eastern Oregon was, like the western Oregon one where the modern reservation is located, was called the “Grand Round” in Settler English. From this we can infer that the same wording in modern Grand Ronde traces way back to Anglophone contact with Canadian/Métis French speakers in the fur trade.

On page 51, Palmer encounters missionaries Marcus and Narcissa Whitman, speakers of Jargon, though no CW is mentioned here.

The keenly interesting thing that he does observe is this, on page 85, about the ex-Hudson Bay Company workers settled in French Prairie, in the Willamette Valley of northwest Oregon:

“But [i.e. only] few of them speak the English language fluently; they mostly talk French and Chinook jargon.”

That single sentence tells you volumes about early-creolized Chinuk Wawa days. French-Canadians (many or most of them Métis), and by extension their (usually Indigenous) wives and their kids, heard and spoke more French and CW than other languages. Which handily explains how it was that the Jargon took such lively shape once Fort Vancouver and its attending settlements was formed in the mid-1820s.

On page 93, telling about the Tillamook Coast Salish people, Palmer has apparently gotten his knowledge of their culture via Chinuk Wawa, signaled by his use of the words < tiye > ‘chief’ (táyí), < tilicums > ‘people’ (tílixam-s), and < Sawhle Tyiee > ‘high mountain’ in reference to Mount Rainier (sáx̣ali-táyí ‘above-chief’, otherwise usually understood as ‘God’) : 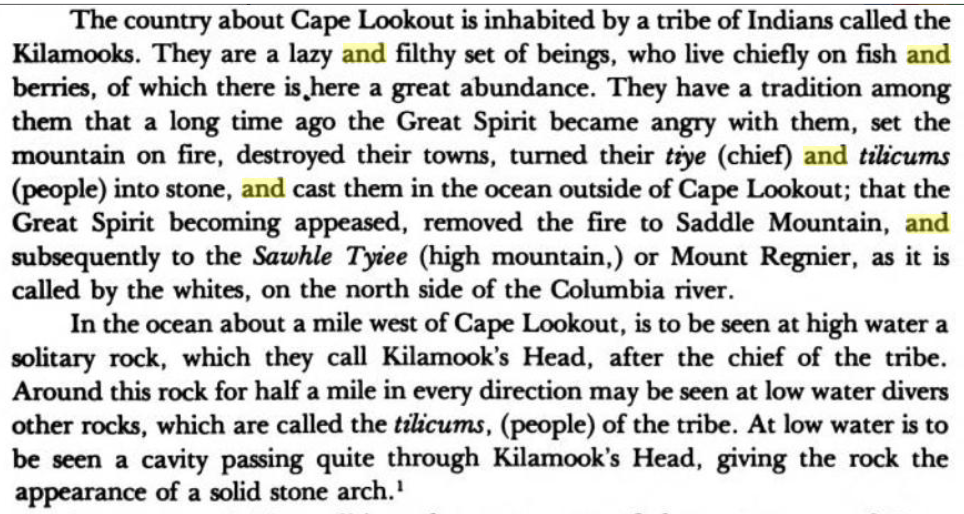 On page 99, totally in character for the no-nonsense Palmer, he’s invited to dinner by Dr. McLoughlin (another CW speaker) at Fort Vancouver, but declines as he wants to make further progress in his journey along the Columbia River.

Page 100 carries Palmer’s characterization of “the village” nearby, “the inhabitants of which are a mongrel race, consisting of English, French, Canadians, Indians of different nations, and half breeds, all in the employ of the company. … As yet there are but few Americans settled upon the north side of the Columbia.”:

Another multiethnic, creole Chinuk Wawa-speaking village is noted on page 101, not named by Palmer but known to us as Cowlitz Farm(s) :

A little-known Indigenous community literacy is noted on page 113, telling that many of Rev. and Mrs. Spalding’s Nez Perce parishioners have created handwritten copies of the missionaries’ printed Scripture translations (the first book published in Idaho). Palmer says he possesses some of these “and other writings” by Nez Perces. I had not known!

On page 116, in the vicinity of Whitman’s mission (Walla Walla area) and with the involvement of Marcus Whitman, Palmer’s party negotiate with some Indians about selling some horses and cows. Palmer relates details of the bargain but gives no clues about the the language used; it’s likely to have been CW, but could’ve been facilitated by some basic Nez Perce, Sahaptin, and/or sign language.

At about that point in Palmer’s book, his party have left CW-speaking territory on their way back to the States.

So you’ve seen that this particular memoir isn’t of titanic value for Jargon studies, but it’s nonethless one of the important early documents of the settings in which CW took root as a community language. It’s a solid reference.