William Petit Trowbridge (1828-1892), my fellow Columbia University Lion, did some coastal surveying work in the Pacific Northwest during the frontier era.

Naturally he used the “Jargon” in working with Indigenous people out here.

Thanks to Jack George on Facebook for first bringing this fella to my attention.

We’re fortunate enough to be able to read some of Trowbridge‘s diary of the experience:

“Journal of a Voyage on Puget Sound in 1853 by William Petit Trowbridge“, by Lancaster Pollard, in The Pacific Northwest Quarterly Vol. 33, No. 4 (Oct., 1942), pp. 391-407. (This publication omits such entries as a Lummi Salish vocabulary, which anthropologist Verne Ray characterizes (page 392) as “intermingled” with Chinook Jargon; oh how I want a copy of that!!) 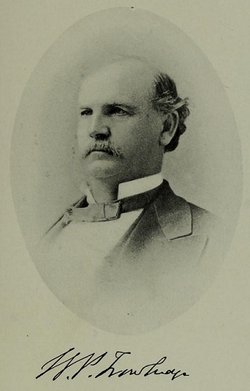 It contains a good little bit of Chinuk Wawa recorded in Trowbridge’s own personal spellings, which shows that this is CW that he actually knew, rather than something he had read somewhere.

This is marvelously early for Puget Sound CW! I’ve previously written about the chronology of this language’s appearance on the Salish Sea, which dates to pretty exactly 1850. I’ll focus on these, although there’s a lot of other fine information in the journal, e.g. that Trowbridge’s party included an African-American cook, and that they met at least one “Frenchmen” (Canadian) in the Nisqually area.

Our Indian drunk on starting. Declared that he was the real Tyee [táyí ‘chief’] of the West.

July 28, 1853, a reference to a place name that only works as a CW loan into English, not within the pidgin-creole:

We broke up camp & started on our journey at 5 A.M. intending to stop for breakfast at New York or “Alki” [Seattle; áɬqi ‘in the (distant) future’].

…and from the same entry, a CW speaker who also knows another language new to the area…

Our friend John who was drunk when we started and declared that all the other Indians were cultus [kʰə́ltəs ‘no-good’] and he “hyas tyee” [háyás(h) táyí ‘big chief; primary chief’] turns out to be the best Indian of all. He speaks English well and is good natured works well &c.

John Houston relates his adventures in San Francisco in “Chinook.”

August 1, an indication of a CW place name:

Numerous islands of trap rock block up the mouth of Deception passage and form with the main land the Canoe passage (Kanim) [kəním ‘canoe’].

The Indians are very loth to acknowledge that a “Boston” [bástən ‘American’] knows more about the Sound than they themselves and a circumstance like this brings down their pride a little. As I expected we soon reached the end of the bayou and very much to their mortification I appeared very angry and told them they were “cultus” (worthless) and made them turn back instantly.

I called the capt[ain] of my crew, “John Taylor,” and told him to inform the Indians that if I lost anything I should return with soldiers and punish them.

[‘]The Indian spoke to you[‘]; as much as to say they had welcomed me to their village.

They had a gambling house and on the arrival of my crew with “haiu iktas” (plenty of things) [háyú íkta-s ‘many (valued.)things’] they thought they would fleece them.

This I presume they did for one of them appeared the next morning without any shirt, another without a coat, and another without blankets, and wished me to replace the articles. I told them if they were foolish enough to gamble they must suffer. “Closch,” said they ([‘]all right[‘]) [ɬúsh ‘good’] and went away.

Page 406, August 11, at the house of another Hudsons Bay Company retiree, who turns out to be married to an Indigenous woman:

On arriving at Mr. Edgar[‘]s house I found him up, fortunately, & he welcomed me cordial[l]y to his house, saying that he would soon get me some supper. I had indulged in the fine prospect of some good bread and milk or whortleberry pie from the hands of a real American housewife, but it was so late that I begged Mr. Edgar not to wake his wife, who had gone to bed. I saw some beds in the corner and supposed they were for the children.

Edgar insisted upon getting me some supper and called out to his Betsy, “Betsy! Okuk Tyhee tikeh muk-a-muk.” [úkuk táyí tíki mə́kʰmək ‘This gentleman wants to eat.’ — the use of táyí ‘chief’ to refer to a White male of any social rank is typical of Settlers’ CW]

O what a fall was then: My New Eng[land] housewife answered from under a blanket in the same jargon & my prospect of a good supper was gone.

PS — Trowbridge’s papers at the University of Washington are said to include numerous sketches of PNW scenes. I’d love to go have a look at those when Covid-19 restrictions let up!