1891: The Oath, and Settler supremacy

We know Chinuk Wawa was used in court testimony all around the Pacific Northwest, but mysteries have persisted around this subject…

…for example, we have hardly any written-down recordings of actual CW speech in the legal context.

And even the oath that the bailiff gave in Jargon to swear witnesses in has been an obscurity.

In order to give you an idea of whether the 3 sentences of this colonialist warning (read on) spoke at all clearly to the Native people it was aimed at, I’ll supply some interpretation. 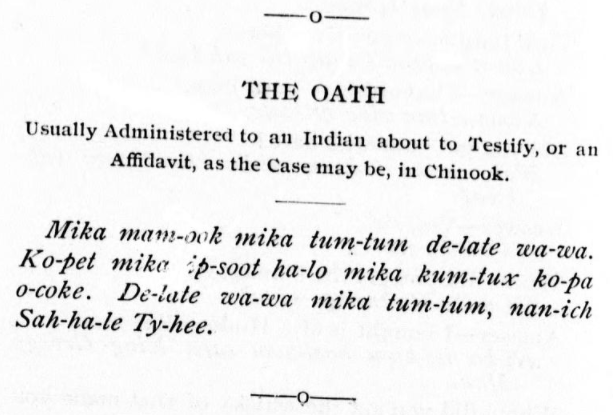 Usually Administered to an Indian about to Testify, or an Affidavit, as the Case may be, in Chinook.

This text reads like a warning, even a threat, to any Indigenous person hearing it in a Settler courthouse. I don’t see it as an oath; differently from the oaths or affirmations customary in Anglo-Saxon law, it doesn’t even pretend to ask for the witness to opt in to the proceedings, or to respond at all. Here’s an 1891 example of the more customary format:

From “Instructions for Courts-Martial“.

Only a purported form of “Oath” that was in a language foreign to English and identified with non-White people could have been accepted without a provided translation vouching for its accuracy. Your average immigrant, I believe, would have had a fairer shot at being sworn in Settler-style than an Indian would in our region. And new immigrants were typically despised in the USA!

The inclusion of the Subject pronoun mayka [1] puts the first and succeeding lines into a grey area between Imperatives (which more often lack that pronoun) and Declaratives of fact. The punctuation with periods here and throughout suggests the latter interpretation; there is no indication that these lines were to be read as questions, thus eliciting a really different reaction from the witness than our customary English “Do you solemnly swear…?” formula.

Word choice is pretty revealing also in mámuk mayka tə́mtəm [2], no matter which of the possible interpretations we give it.

With (1), we would expect, in CW fluent enough to truly accommodate Indigenous speakers (who consistently were the most eloquent Chinookers), the Irrealis subordinating conjunction pus to introduce the purpose clause dlét-wáwa ‘talk straight, speak honestly’.  Standing as it does without a pus, the first line instead comes across to a fluent speaker as ‘You will make your mind/yourself talk straight.’

The second line, too, has flaws. There is a disturbing ambiguity in kʰə́pít mayka ípsət [3]: this means ‘you only hide (things)’! Knowing a little bit about American culture, we can infer the possibility that an Imperative ‘stop hiding (things)!’ was in the mind of the court interpreter who came up with this “Oath”, but that has an equally inappropriate air of accusation.

It’s obvious that the above is a try at rendering “the whole truth”; let me suggest here that the interpreter would have been well-advised to consult the abundant Catholic literature in CW, where those who are about to make the sacrament of confession are fluently and understandably admonished not to leave out any gory details. (Note to self — I’ll have to do a separate post on that.)

We can also gather, with our knowledge of the dominant culture, that hílu mayka kə́mtəks kʰupa úkuk [4] ‘you know nothing about these things’ is a continuation of this quest to find out all that the witness knows about the matter at hand.  But again, we have a phrasing that sounds more like a dismissive accusation than a request for information from the Native on the witness stand. The grammar of the second line falls short of fluency, landing with a stilted ‘Stop your hiding(, claiming) you don’t know about these things’ when good CW could easily paraphrase the desired idea, e.g. as ‘Don’t hide anything that you know’. (Hílu mamuk-ípsət íkta mayka kə́mtəks, in the northern dialect that we see in the Oath, would stick with the Imperative mode.)

The third line says what it means. It’s only the shortcomings of the first two lines that make this a moot point.

In summary, we have here a less than fluent, at best haplessly confusing, at worst intentionally racist and unfair text. It’s hardly an equivalent to the customary Oath in English.

A more equitable society than the late-frontier and early post-frontier PNW would’ve tried hard to deliver a competent translation and ensure Indigenous folks a fair deal.