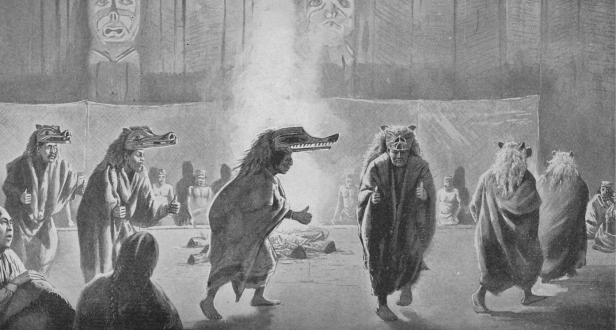 I noticed an intriguing similarity of sound & meaning between these 2 languages, separated by an imposing stretch of rough seacoast.

(Or by many days’ overland travel through several nations’ traditional territories.)

It’s not known from other CW source documents, so it wouldn’t seem to have been widely used.

I lack information on the morphological structure of the Nuučaan’uł word. Maybe it’s related to a set of root-forms m’a, m’aa, m’ee having to do with ‘biting’ and the ‘Wolf Ritual’, and a seeming suffix -ink(ʷ) ‘together’. (Can any of my readers help there?)

(Likely a stray observation, but maybe that’s what I’m trafficking in today — that -ink(ʷ) ‘together’ has a pleasing resemblance to the Proto-Salish root that means ‘one; together’ among other things, and which I’ve proposed is part of the etymology of the word “Chinook”.)

The CW word’s limited occurrence in “the literature” tends to rule out any idea of its having come north via CW.

Could the resemblance be pure chance?

Or, could it be a loan in the reverse direction, southward to £əw’ál’məš?

Might the slippage between the meanings be explainable as a byproduct of long-distance transmission through many intermediaries?

Just tossing this out there to see some reactions.