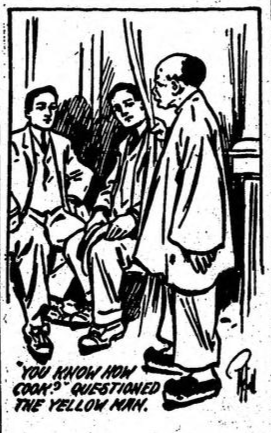 I continue researching “that other pidgin” of our region (West Coast-style Chinese Pidgin English), and this find was kind of colorful…

Often we find parallels with, and insights into, Chinuk Wawa when we examine old documentation of CPE.

Here we have a Chinese immigrant dealing with two White undercover cops in his opium den.

It seems to be fictional, but based on known realities. As usual, here we see a West Coast newspaper not bothering to translate from CPE into standard English, as the average resident had plenty enough exposure to the pidgin to understand it.

Curtains of cheap, drab material masked wide stretches of the wall. From behind these curtains came the hum of subdued conversation and the perfume of the cooking “hop.” The Chinaman parted two strips of the drab cloth, and showed a bunk between the curtains and the wall. Brockett and Solano looked up and down the room. There was no sign of their quarry. The boys quietly entered the bunk which the Chinaman had assigned them, and their host quickly brought them the full paraphernalia of the opium smoker’s pastime. “You know how cook?” questioned the yellow man, as the young fellows handed him a few silver coins. “You not can cook, me cook for you?”

“Not just yet,” said Solano. “Let us rest a little — we are tired and need to stretch out awhile before we smoke.” “All lite. You get leady smoke, call me. I cook for you.“

Incidentally, the word “hop” above is from the Cantonese (or more likely Toisan / other southeast Chinese) word for ‘opium’; maybe it was a CPE word for that substance. It entered English in the late 19th century. According to etymology.enacademic.com:

This sense of “hop” has become as rare nowadays as the recreational drug it names, but we still use a development of it, “hopped up”, quite frequently in current North American English.

It’s one of a large number of expressions we use, typically, without realizing that they trace back to previous generations’ close contact with CPE!

In my experience, the same can be said about the Chinook Jargon loanwords in Pacific Northwest English — most people who use them aren’t conscious of where they came from.