Another, and quite little-known, frontier-era Oblate missionary in BC who used Chinook: Father Denis (‘Dionysius’) Lamure OMI. 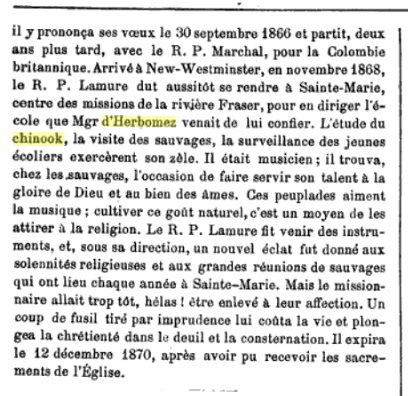 (… he left, two years later, with Rev. Father Marchal [a good speaker of Chinuk Wawa], for British Columbia. Arrived at New-Westminster in November 1868, Rev. Father Lamure immediately had to go to Saint Mary’s [Mission, BC], center of the Fraser River missions, to direct the school that Bishop d’Herbomez had just entrusted to him. Study of Chinook, visits to the Indians, and the supervision of young schoolchildren exercised his zeal.)

The above article goes on to mention Lamure’s love of music, which led to his having instruments brought to the Mission for the students to play, and the fact that he died from “a reckless rifle shot”. (Fired by “his companion”, according to Father A.G. Morice.)

A good 1948 master’s thesis by William Gurney about Father Le Jeune of Kamloops Wawa fame echoes the above “necrology” for English-language readers.

What more might such an energetic young priest, arriving in BC almost a generation before Le Jeune, have contributed to Chinuk Wawa studies if he had lived longer?