For a community who embraced “Chinook Writing” and Chinook Jargon in the 1890s, the Sechelt Salish people of BC’s Sunshine Coast surprise us by their 1880s unfamiliarity with Jargon.

My reason for saying so — at least about the remote x̣ə́ničən (Hunaechin) Sechelts — is an article from a series in a popular outdoors newspaper/magazine, “Bye-Ways of the Northwest: Ninth Paper” (Forest and Stream magazine, December 15, 1881, pages 384-385).

I think the author is that publication’s editor, the influential naturalist George Bird Grinnell (1849-1938), whose youth-audience 1906 book “Jack the Young Canoeman: An Eastern Boy’s Voyage in a Chinook Canoe” features people, places, and whole passages from today’s piece. The book actually amplifies this article’s information, so I’ll quote from both.

Here’s what the article tells us: 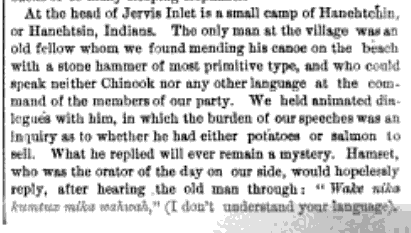 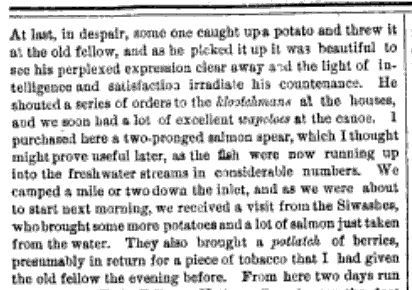 At the head of Jervis Inlet is a small camp of Hanehtchin, or Hanehtsin, Indians. The only man at the village was an old fellow whom we found mending his canoe on the beach with a stone hammer of most primitive type, and who could speak neither Chinook nor any other language at the command of the members of our party. We held animated dialogues with him, in which tho burden of our speeches was an inquiry as to whether he had either potatoes or salmon to sell. What he replied will ever remain a mystery. Hamset, who was the orator of the day on our side, would hopelessly reply, after hearing the old man through : “Wake nika kumtux mika wahwah,” (I don’t understand your language).

At last, in despair, some one caught up a potato and threw it at the old fellow, and as he picked it up it was beautiful to see his perplexed expression clear away and the light of intelligence and satisfaction irradiate his countenance. He shouted a series of orders to the klootchmans at the houses, and we soon had a lot of excellent wapetoes at the canoe. I purchased here a two-pronged salmon spear, which I thought might prove useful later, as the fish were now running up into the freshwater streams in considerable numbers. We camped a mile or two down the inlet, and as we were about to start next morning, we received a visit from the Siwashes, who brought some more potatoes and a lot of salmon just taken from the water. They also brought a potlatch of berries, presumably in return for a piece of tobacco that I had given the old fellow the evening before.

Now here’s how pages 190-191 of the book (with an accompanying photograph) narrate the scene, in more elaborate detail: 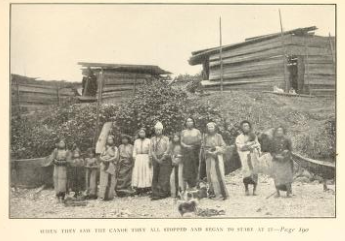 For a while they paddled on in silence, and then, as they rounded a
point, came a call from Fannin: “Hello! there’s an Indian village.”

Three or four houses stood on the bank but a short distance back from
the water’s edge, and near them were a few people busy at different
tasks. When they saw the canoe they all stopped and began to stare
at it. Down on the beach, just above the water’s edge was an old man
working over a canoe. Fannin said: “Let’s push in there and see if we
can buy some potatoes or other food.” They pushed up to the beach,
and when close to it saluted the old man with the usual phrase,
“_Kla-haw-ya tillicum?_” (How are you, friend?) The man gave an
answering shout, and Hamset turned to them and said: “I guess he can’t
talk with us”; which was Fannin’s translation into English.

They landed and found that the man was mending some cracks in his canoe
by fastening over them strips of tin, seemingly cut from an old tin
can, by means of tacks and a primitive stone hammer–a cylinder of
stone with enlarged flat ends.

Hamset began to talk with him in Chinook, but the man apparently did
not understand, and replied by a speech in some language which Hamset
could not comprehend. There was a long talk, in which each of the two
Indians made a speech, which was not understood by the other. Fannin
tried the old man in Canadian French, and Hugh made signs to him,
but there seemed to be no common ground of communication. After each
remark by the old man, Hamset would hopelessly reply after hearing him
through: “_Wake nika kumtux-mika wahwah_” (I don’t understand your
talk).

Within a rude fence near one of the houses was what looked like a
garden, in which were growing plants that resembled potatoes. Presently
a bright thought came to Jack, and he walked down to the canoe, took
from the provision box a potato and handed it to the old man. It was
amusing to them all to see the expression of perplexity clear away from
the old Indian’s face and understanding and satisfaction appear. He
laughed delightedly and shouted to the women at the house, and a little
later two of them came down carrying a large basket of potatoes–and
very good ones too. These were put into the canoe, and paid for by
“four bits.” Then at Hugh’s suggestion Jack gave the old man a piece
of tobacco. They wandered up to the houses, looked into them, and
presently returned to the neighborhood of the canoe. Leaning against
one of the houses was a two-pronged salmon spear, which Jack wanted
and which the old man sold him for half a dollar. Jack thought that
the implement might be useful a little later, as the salmon were now
beginning to run into the fresh water streams in considerable numbers.
Hamset said that these Indians were called Hanehtsin. He declared
that most of the people must be away fishing, and said that there must
be many of them who could speak Chinook, although this man could not.

Next morning as they were eating breakfast a canoe came in sight from
the direction of the village, and when it landed the paddlers proved
to be their friends of the night before, who brought them some more
potatoes and several salmon just from the water. These having been duly
paid for at the rate of twenty-five cents each–for a twenty pound
salmon–they brought forth from the canoe a large basket of berries
which a small boy who was with them, and who had some knowledge of the
Chinook jargon, announced was a “potlatch,” or gift–very likely in
return for the bit of tobacco that Jack had given to the old man the
night before.

There are a number of other places in the book where the Jargon is mentioned, and a couple of words mentioned in highly standardized spellings. I’m unsure how factual the book is overall–it seems to me the earlier article is probably closer to the reality and the book dressed things up to create a novel–and I’m not taking the time to transcribe that material here. Go read for yourself 🙂

A factual inference that I think we can take away from today’s readings, actually, is that the Shishalh First Nation people of the Sechelt, BC area (in much closer and more frequent contact with non-Natives) picked up the Jargon sooner and more thoroughly than their cousins at the remote opposite end of their traditional territory.

← The Great Potlatch Era
What do Mary’s little lamb and Chinuk Wawa have to do with each other? →