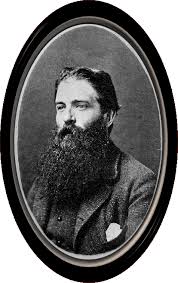 Bushby (1835-1875) was the son of a woman who professionally translated literature from Danish and Spanish into English, and he may have inherited some of her aptitude; he seems to have picked up Chinuk Wawa quickly.

Appointed in January 1859 by Governor James Douglas as clerk to the famous judge Matthew Baillie Begbie on his frontier circuit, Bushby put the Jargon to plenty of use.

Agnes Bushby, “a stunning girl — black eyes and hair and larky like the devil”, in the memorable words of her husband (image credit: Wikitree)

Bushby’s diaries are one of the scarce direct documents we have of the use of “Chinook” in frontier judicial settings.

They’re also a rare instance of this language being documented on the spot in the early gold rushes, along what was to become the Cariboo Road.

Here I’ll present to you several clippings illustrating Bushby’s acquaintance with Chinuk Wawa, which he seems to have embraced as gladly as biographies say he did the rough but always interesting life of a roving frontier court official. Many of his spellings are suggestive of a person writing as he spoke, rather than being copied from published dictionaries.

One of his first impressions of First Nations people who congregated in Esquimalt/Victoria, in late December of 1858, was that the Jargon was pretty universally known. That’s interesting because just a few years earlier, there were few skilled speakers of it north of Puget Sound, but of course now the brand-new Fraser gold rushes were bringing in large numbers of prospectors, who were being told to speak it with Indians:

The Indians are a miserable race — badly clad in blankets &c & some
painted all colors. The Chinook Jargon is mostly spoken I am learning it —

Soon Bushby is dropping Jargon words into the narrative of his thoughts:

Further along the route taken by most gold seekers, up the Fraser in Interior Salish territory, Bushby is using scraps of Jargon both to record his thoughts and to communicate with Native people: 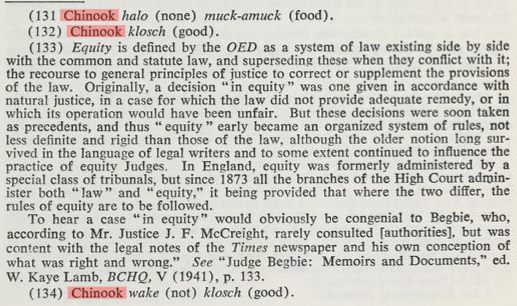 Our hut is quite a rendezvous for the hungry this morning We had a mule
which always comes round for spare potatoes &c then came 3 Indians
(1 man & 2 women) Thompson River Indians starving—with Halo muck
a muck (131) — we gave them a small piece of bread and the remains of a little
hashed venison and a mouthful of tobacco then came a large hungry dog
which licked out the stew pot & we finished up with several poor pigs—The
mining operations on the river has [sic] spoiled the salmon season and a great
many of the Indians are starving — poor devils!!
— We get no letters up — I had intended writing home today but some business has just come in — adios — glosch (132) — …

… one of the little girls happened to expose a pack of cards so
I told the mother they were “wake glosch” (134) with a frown so she made the
child throw them away—poor things how grateful they were for the food—
we always treat the Indians well that come to our door. \

(129) For the winter house of the Interior Salish Indians see British Columbia,
Department of Education, Division of Curriculum, Our Native Peoples, Vol. 3,
Interior Salish, Victoria, 1952 (British Columbia Heritage Series No. 1), pp. 19-21.
The white men called the structure a “keekwillie” house, from the Chinook
kee-quil-ly, meaning below, under.

Farther along, some Chinook Jargon plus words of local Salish language is an effective communications medium for everyone:

— I marched ahead with one or two of them and altho’ I know
only a few words of their lingo with the aid of a little Chinook and signs
I managed to keep up a conversation all the way.,,

We [sic] is quite strange to see how soon the Indians detect the Boston
men & how they dislike them and how much they like King Georgie man —
On the road we met all sorts and kinds of men — English, American,
French, Canadian, Chinese — &c

Proving that Bushby still feels like a novice who can stand to improve his Chinuk Wawa, he opts to smoke and study the language while Begbie enjoys fly fishing:

Sunday 3 Apl 1859.
On the sight [sic] where they intend to build the town of Lytton there are
the remains of several Tyhees’ tombs among other things they deposit
around the tomb and on top of poles his guns canoes pots & pans clothes
and his horses and kine and surround the whole with grotesque wood carvings. — I went out with Begbie and he tried the Thompson with a fly but with
no success — while I lounged on the sand in the sun a cigar en bouche and
the Chinook vocabulary en main!!

A bit of Wawa pops in at Lillooet:

after a long interview with a hyas tyhee (142) — and a great
deal of bother packing getting into the boat — across the river & up the hill
the other side we pitched our tent in first rate style.

More, in the Lillooet-Seton Lake area:

(143) Chinook for talk. For the substance of the discussion see Begbie’s
Report, pp. 242-243: “They complained of the conduct of the citizens of the
United States in preventing them from mining, in destroying and carrying away
their root-crops without compensation, and in laying wholly upon the Indians
many depredations on cattle and horses which these Indians informed me were in
part, at least, committed by ‘Boston men.’ “

Friday. 15 Apl 1859
Up at 4 o’clock packed and started at 5 o’clock at 10 o’clock got to the
other side of the lake had some breakfast at the little old hut & started with
Nicol along the trail for the lower lake Lillooet (151)

(151) Little Lillooet Lake, often called Tenass [Lake], from the Chinook for little [lake]. [Yes, < lake > is a Chinuk Wawa word, found all over the place and even borrowed from CW into Native languages. External evidence shows that this lake was commonly known as Tenass Lake by 1859.]

Jargon is also in use at the hot springs named for Bushby’s future wife, though it’s interesting that Bushby is unable to communicate with a Chinese immigrant:

Saturday 16 Apl 1859
We have been waiting for Indians to take our packs on to Port Douglas.
3 have just come in sight hurra! There are only 3 — we must pack them
well — the beggars they wd not take our packs they sd they were too heavy
so we told them to clata.wa (152) and made a show of putting up the tent
thinking that that might induce them to come to terms but no — happily a
canoe came by so we shipped all the baggage we could & called the Indians
back they however wanted $3 ahead whereupon we lost all patience kicked
them off and shouldered our own packs — we had not gone far when we met
a chinaman & 3 mules who, much to our delight, took our packs so on we
went. I endeavoured to hold a conversation with “John” but cd not understand him at all —