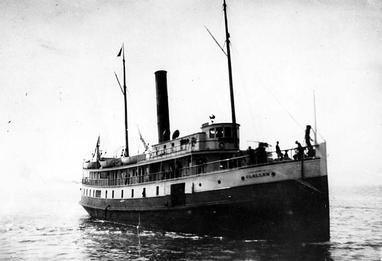 Today we’ll start another mini-series that’s hard to look away from.

The editor of Kamloops Wawa, Father Le Jeune, makes this particular issue of his newspaper an echo of a then-popular idea that several fatal tragedies (from the Iroquois Theater fire to the death of Josette at Nicola) might be a message from God for us to stop and think.

This is my opportunity to tell you that misfortune was popular entertainment in those days. Poems and sheet music of songs — including “murder ballads” — sold countless copies as people shivered vicariously over the terrible things happening to their fellow citizens.

Today’s article fits right into that genre of literature. Some things never change.

Plus, people were already superstitious about this steamship and this particular sailing, according to Wikipedia:

During her launching on April 15, 1903, the woman who swung the bottle of champagne at her bow missed, and when the U.S flag was unfurled, it was upside down, in the sign of distress. These were deemed unlucky signs by the superstitious among the waterfront and marine trades.

Known as “the bell sheep’s premonition” after the fact; an odd event occurred to the Clallam in Seattle as she was loading her northbound passengers and freight at Pier 1, at the foot of Yesler Way. Black Ball Line steamers often carried sheep bound for Port Townsend and Victoria along with a trained mascot or bell sheep which always led the herd aboard. On this occasion, the bell sheep that usually made the voyage absolutely refused to board the vessel and was finally left behind when the ship departed Seattle at 8:30 a.m.

Here’s the beginning of the story, with the Chinook Jargon first, then my comments, and the writer’s English version of it following.

‘On Friday the eighth of January, this big’

‘steamboat called the Clallam departed the city of Seattle’

want go to Victoria, as always it travel

‘headed for Victoria, as it normally travels’

to Seattle and to Victoria.

‘between Seattle and Victoria.’

‘On that Friday the eighth of January 55 white people’

go on that steam-boat, want go to

‘were travelling on that steamboat, intending to go to’

‘Victoria. Forty-four men were working on board that steamboat:’

thus they exist ninety-nine all together on

not-far it arrive at Victoria; maybe

‘It had nearly arrived at Victoria; in about’

one more hour and it reach to Victoria,

‘another hour it would reach Victoria,’

and it find strong wind, but unimportant that:

‘when it encountered a strong wind, but no matter:’

many time it find strong wind and not it afraid:

‘many times it had encountered strong winds and wasn’t alarmed:’

‘that steamboat was really big, it was an excellent one.’

those people travel on that steam-boat much-think…

‘Those people traveling on that steamboat were thinking…’

…fráydey* [1] éyt djánuari…: you can see that the names of days and months are taken from local spoken English. This raises the question, is there an English dialect that pronounces the name of the first month like this (Janwary)? Father Le Jeune’s Chinuk Pipa spelling of it is puzzling.

Siatl [2] is written with a dotted underline in the Chinuk Pipa, which is the official way to show that a word is a name.

pi kə́ltəsh [6] úkuk: this is basically just a variation on the ever-popular < cultus kopa nika > ‘I don’t care (it’s unimportant to me)’ etc., so it’s intended as ‘this was unimportant; (it was) no matter’.

úkuk tílikam [Ø] [7] kúli… (literally ‘those people [Ø] traveling’, i.e. ‘those people who were traveling’): this demonstrates once again that you make a relative clause (a verbal expression to modify a noun) without using any special word word like English ‘who’. 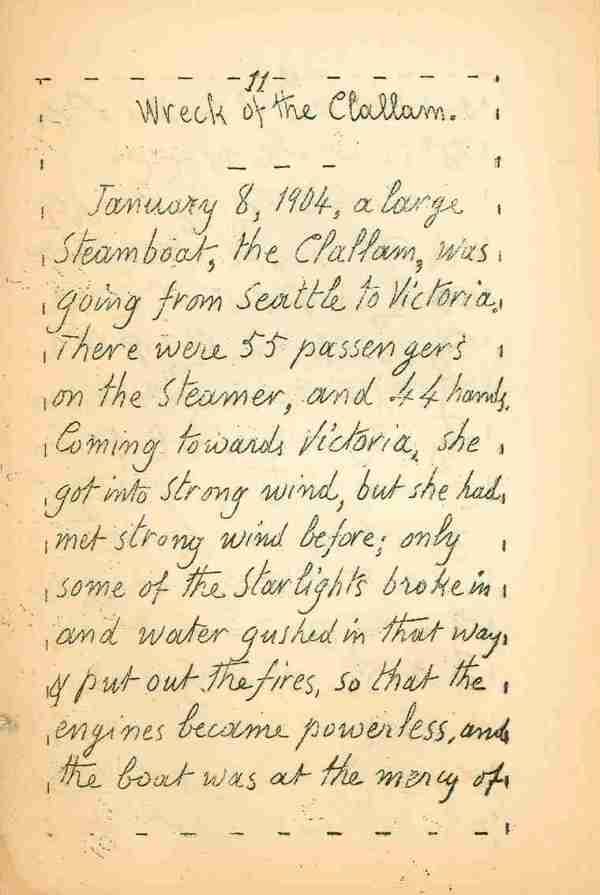 By the way, Le Jeune’s “starlights” thwarted my research skills — it wasn’t apparently a known term in English — until I came across the mention of “deadlights” (porthole shutters/covers) in the Wikipedia article noted above.