1862: Haidas could communicate with us only via Jargon-speaking newcomers 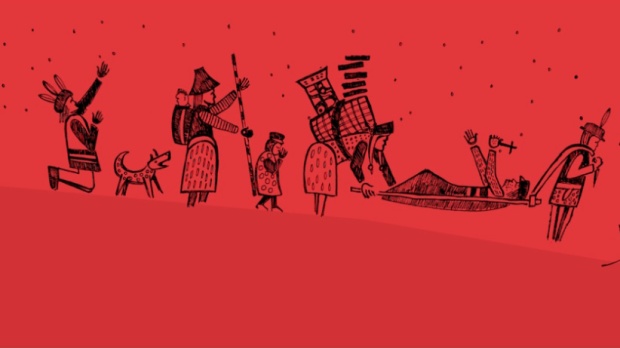 A man who had been part of a gold rush to the Stikine River while Alaska was still Russian territory notes how limited chances for communication in Haida Gwaii were back then.

His recollection echoes things we’ve read that associate Chinuk Wawa with Indigenous slaves from the southern Northwest Coast taken by northern tribes. However, I’d like to point out that the “squaws who had been bought from Coast [i.e. mainland?] tribes” in today’s clipping aren’t necessarily slaves. It was Aboriginally customary to refer to taking a wife as purchasing her, since you gave substantial gifts to her family; and marrying someone from another tribe was an honored way of strengthtening intergroup relations.

The note of Haidas’ and Europeans’ scant shared language resources in 1862 also parallels the big picture that Chinook Jargon was hardly known in southeast Alaska until the 1867 US takeover.

Also, today’s clipping is a chance to remind you that there was a Haida-language-based pidgin trading language — which may have given Chinuk Wawa its basic word < halo > ‘not; no; none’ — before CW had spread north of the Columbia River zone. It was mostly documented a generation before the incident recounted today, so it may have been out of use by then.

It’s unlikely that any Haidas had never seen Whites by 1862, as today’s selection claims, but it’s totally plausible that at that moment they knew no language for communicating with newly arrived English-speaking goldseekers.

Here is G.F. Kyle’s remembrance, via a Seattle paper’s “Passing Throng” columnist who had been talking with him. I’d be derelict in my scene-setting duties if I failed to mention that the Haidas spoken of here may have been trying to prevent the 1862 BC smallpox epidemic from reaching their village.

Finally, it’s just possible that the non-Jargon-speaking tribe spoken of in the last sentence below are a shift of topic to Dene (Athabaskan or “Stick”) tribes inland on the Stikine River. For those people to not know Jargon in 1862 would be less surprising than if it’s Haidas being discussed. The historical record tells us that coastal tribes such as Tlingits acted to intercept outside trade and communication, to retain an economic advantage over the Denes. But, while Chinook Jargon could have reached these folks via the interior of BC, the best candidates to bring it would be the Chilcotins, whose territory is quite a bit to the south, and who are consistently represented as speaking it imperfectly.

Now, read and make your own conclusions: 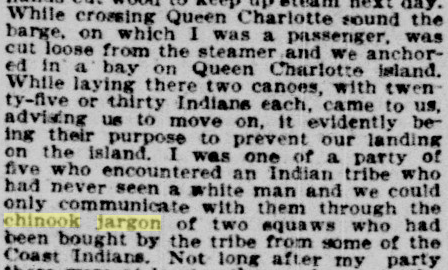 While crossing Queen Charlotte sound the barge, on which I was a passenger, was cut loose from the steamer and we anchored in a bay on Queen Charlotte island. While laying there two canoes, with twenty-five or thirty Indians each, came to us, advising us to move on, it evidently being their purpose to prevent our landing on the island. I was one of a party of five who encountered an Indian tribe who had never seen a white man and we could only communicate with them through the chinook jargon of two squaws who had been bought by the tribe from some of the Coast Indians.

2 thoughts on “1862: Haidas could communicate with us only via Jargon-speaking newcomers”