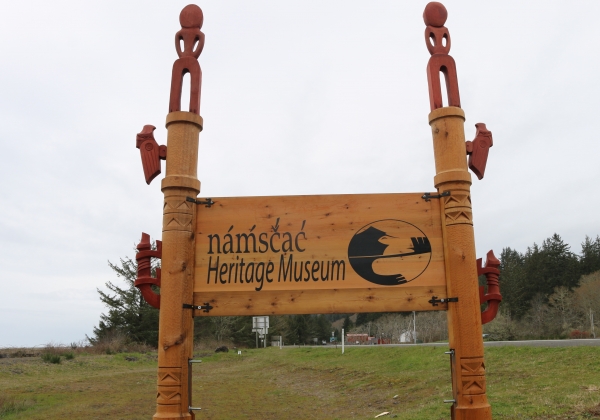 Here is a traditional, and I expect true, story about the origin of southwest Washington’s Long Beach Peninsula and Shoalwater Bay.

This is the first in my mini-series of Indigenous tales told to a settler in Chinuk Wawa by Shoalwater Bay (a.k.a. Willapa Harbor), Washington, Indians.

As we so often have to deal with, there is some strange and misleading punctuation in the Chinook Jargon here, but once you realize that, it’s a wonderful read.

My notes afterward. You’ll find there are revealing differences between Whealdon’s English literary rendering and what’s in the quoted Jargon!

[Isaac H. Whealdon is an old [1872] settler in the Willapa country. For the benefit of posterity he has written down these stories and sketches, which, through his friend, T. C. Elliott of Walla Walla, he has transmitted to the Washington Historical Quarterly. After this article was in type news was received that the aged pioneer author met a tragic death near Willapa on June 15, 1913. — Editor.]

The Sunset-Pacific Monthly has in its issue for May, 1912, an article on the Tomanowos [1] rose and how it came into existence. This communication by Samuel M. Evans is introduced by a beautiful legend — The Breath of the Chinook — and this legend brings to my memory one related to me by an old Indian named Matil [or Matell].

A long, long time ago there was no peninsula or bay or Indians, but one day there came from the siah cold illahee [far cold country] [2] a big canoe with a hundred warriors with their klootchmen and papooses [3]. They tried to enter the Columbia, but hiyu winds, hiyu skookum pe-wake, yaka charco copa [4] [but great strong winds prevented an entrance] [into the] Columbia. So they paddled ashore just where the hill and rocks terminate at the south end of what is now the peninsula. Here they moored their big canoe, tying the stern to the rocks at the south and anchoring her bow to the north. Caching their paddles and other things in a cave in the rocks, they took the old Indian trail for the Columbia river and what is now old Chinook.

After many moons they returned, charco miami, halo, kanim. Yaka nanich okok kanim yaka clatawa keekwulee icta tenas sandspit [5]. No, there was not a sign of their canoe, only they found a little sandspit with a clam bed and the ocean on the west. A few small pine trees grew on top. At the east were some bushes with hiyu olallies [6] of a bright red color. These were cranberries. A little farther out to the east, tenas siah mitlite tenas chuck [7]. This was only a little water, but ’tis now Whealdon’s Pond or Black Lake. When the Indians saw this they built a house on their sand sunken canoe and their children grew and multiplied and as the tribe grew so grew the tiny sandspit and a little bay was formed which became a mighty water. So from the big canoe grew the peninsula and the bay and from the one hundred Indians grew the Shoalwater tribe.

[4] háyú wín hayu-skúkum pi wík yáka cháku kʰupa… ‘lots of wind was being (blowing) ferociously and he/they didn’t/couldn’t come to…’ This Jargon sentence fragment — it’s finished with a codeswitch to English — looks like particularly fluent Chinuk Wawa. Details of it that suggest so include

(B) the use of yáka, which the old sources always say is Singular, to mean Plural ‘they’, which my years of research keep showing is typical of fluent Jargon, especially among tribal people.

[5] cháku máyʔmi, hílu kəním. yáka nánich úkuk kəním yaka łátwa kíkwəli íkta tənəs-sánd-spít* ‘coming (back) downstream, there were no canoes. They saw (only) that canoe that was going under (sinking into) some kind of little sandspit’. Here’s more excellent Chinuk Wawa. Again we see yáka used for a Plural ‘they’. The Jargon diverges from Whealdon’s English paraphrase, saying that the tribe’s stashed canoes formed the nucleus of a new peninsula; this is confirmed a few sentences later by Whealdon.

New discovery: the use of sánd-spít as a Chinook word is perfectly believable, as this was a commonly used word in the local spoken English that would’ve supplied it. We see it given by Shoalwater Bay Indians as the translation of Lower Chehalis Salish sp(‘)ətíč, Diminutive spətíʔčuʔ. (It’s possible the coincidental resemblance between the Salish word and the English reinforced this mental equivalency.)

Some very good Chinuk Wawa there.

If you own a copy of the 2012 Grand Ronde Tribes dictionary, you may have noticed the close relationship between Shoalwater Bay Jargon and GR Jargon…

The explanation that the Peninsula on the north side of the Columbia River is a recent formation makes a lot of sense to me, having had various places pointed out to around Shoalwater Bay that have disappeared or appeared in living memory.

← 1855 Indian war: The Puget Sound Rangers know when they’re being cussed at in Jargon
Indian rites over body of old chief →