1855 Indian war: The Puget Sound Rangers know when they’re being cussed at in Jargon

I ask you: if you were a freaked-out Settler under armed Indigenous attack, how well would you understand what your enemies were hollering at you in Chinuk Wawa?

I equally ask you: if you were an angry Indigenous warrior trying to eradicate Settlers from your lands, how expressive would your CW be?

I display an extract from a newspaper account by one of the volunteer “Puget Sound Rangers” (a.k.a. Eaton’s Rangers) up against the formidable Nisqually Salish leader Leschi’s fighters in the Puget Sound War: 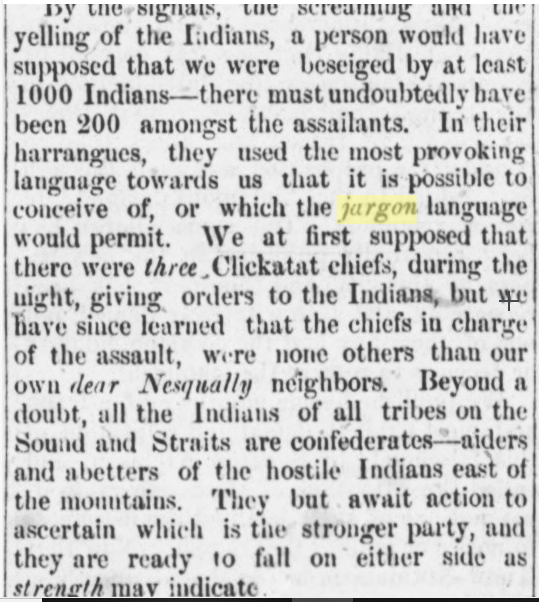 …In their harrangues [sic], they used the most provoking language towards us that it is possible to conceive of, or which the jargon language would permit…

— from the Olympia (Washington Territory) Pioneer and Democrat of November 9, 1855, page 2, column 3

I would give a lot to know what kind of personal remarks were being hurled back and forth in anything-but-trade language.

To hear the White side of it, it was enough to make you plenty mad.

Then again, having suffered a handful of casualties, the Americans rounded up thousands of Indigenous people in concentration camps, which could be upsetting.