Sarcastic birthday wishes to a Goldendale editor, in Jargon

How do you interpret this? I’m curious!

Let’s go straight into a newspaper clipping from the transition time between frontier and post-frontier in central Washington State: 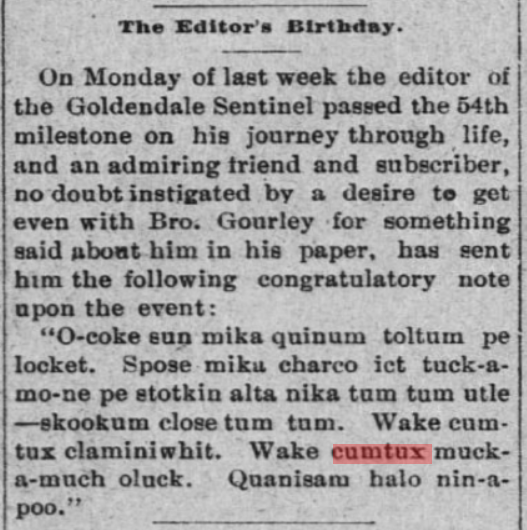 On Monday of last week the editor of the Goldendale Sentinel passed the 54th milestone on his journey through life, and an admiring friend and subscriber, no doubt instigated by a desire to get even with Bro. Gourley for something said about him in his paper, has sent him the following congratulatory note upon the event:

Looking closer at the Chinuk Wawa there…

First, there’s the genre; I think I’ve only seen birthday wishes expressed in the language by Settlers.

Second, there’s the grammar of it; you’ll see this pointed out in the following notes.

[1] máyka qwínəm táłłam pi lákit is a literal translation from English ‘you’re 54’. I’m used to hearing ages expressed in fluent Jargon in a different way, < 54 maika sno > ’54 are your winters’. (I wrote that Kamloops style, and this age formula is quite common there.)

[2] spos/spus is often associated with Whites, because it’s a “folk etymology” of Chinook Jargon’s pus ‘if’ (originally from Chinookan languages) to equate it with slangy English suppose (which happens to also be used in many pidgin/creole Englishes). This is not to say that only Settlers used this pronunciation, but it’s more common in settings where Settler influence was heavier.

[3] álta — it’s good to be aware that this word means not just ‘now’ but also ‘(and) then’. The writer is using fluent Jargon here.

[4] skúkum — another pointer for you: this word doesn’t just mean ‘strong’ (and in Settler speech ‘good’), but it also has this use here, as an adverb ‘very’ that intensifies the following expression.

[5] No subject appears in any of the last three sentences! Bizarre. This is a classic Settler style. Honestly I hear it as White folks playing Indian, with stereotypes of inarticulate grunting savages. I could be wrong, but when Settlers were just spontaneously expressing themselves in Chinuk Wawa & not joking around, they seemed to use subject pronouns the same as anyone else would.

[6] mə́kʰmək úlq’ ‘eat snake(s)’ — this I think is modeled on English. There was an informal expression in the 1800s ‘snake eat snake’, with the same meaning as our current ‘dog eat dog’ or ‘every man for himself’. If my guess about that is right, then the writer is giving the Birthday Boy a backhanded compliment…on the one hand, the honoree isn’t a snake eater…on the other, the suggestion is that he’s a snake! Although there are still plenty of Gourleys in Goldendale, I haven’t found much information about this editor fella; he must have been relatively new in the job, as it was held previously by Judge Ralph Oregon Dunbar (I’m not kidding).

Characterizing this Chinook Jargon text as a whole, I’m going to say that despite its decent level of fluency (which already excluded cheechakoes)…

…it wouldn’t be well understood by a non-speaker of 1890s American English.

And, being written (rather than spoken) further limited the circle of understanding. Recall that nearly all Indigenous people, many immigrants, and a big chunk of US-born Americans, were illiterate in the 1890s.

So in other words, here we’re reading a splendid example of the late frontier’s frequent use of “Chinook as a badge of Settler identity” — as a kind of in-group secret code