Chief Mason denies he has abdicated 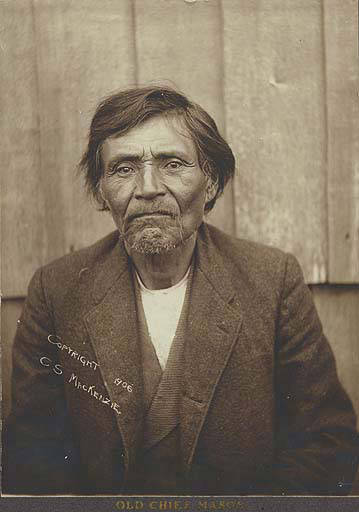 The son of the Quinault tribal chief who negotiated their 1855 treaty with Gov. Isaac I. Stevens comes to town, and he’s not pleased.

Chief Taholah II, also known to Settlers as Billy or Charles Mason, spoke good Chinuk Wawa, and he put it to use:

CHIEF MASON DENIES HE HAS ABDICATED

Chief Mason of the Quiniault [Quinault] Indian trible [tribe], known as Tohala [Taholah] II, denied while in the city Tuesday that he had sacrificed his throne or his power in the tribe because of old age and waning mental faculties, as reported by a newspaper correspondent recently. Chief Mason denounced the story as [sic] his alleged abdication as “cultus paper wawa,” [‘no-good newspaper talk’] and declared that he would seek out the correspondent and figuratively use the scalping knife of old upon his head. Chief Mason says the story has discredited him in the financial world and that his wife has temporarily abandoned him because of the presumption that she has also lost her influence. Chief Mason also says that the story of his having accepted the Shaker religion in his declining years is all cultus wawa [‘worthless talk’]. He says he is still a good chief, capable of ruling the tribe and of eating three square meals a day, and then some.

One thought on “Chief Mason denies he has abdicated”