Not these guys (the 1908 Seattle Siwashes, previously known as the Chinooks!) (image credit: sportspressnw)

There was a baseball team in northeastern Washington state’s post-frontier era named the Siwash Indians.

Locals in a backwater area such as this (sorry!) would’ve still known enough Chinook Jargon to recognize the meaning, even without the redundant “Indians”.

So, were the players Kalispel tribal folks?

Quoting a rather solid Wikipedia article: “Cusick (Salish: čmq̓ʷoqnú) is a town in Pend Oreille County…[and] is the headquarters of the federally recognized Kalispel Indian Community of the Kalispel Reservation.” 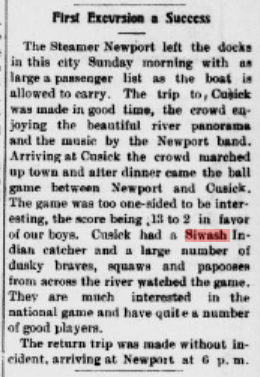 …Cusick had a Siwash Indian catcher and a large number of dusky braves, squaws and papooses from across the river watched the game…

People did call the Kalispels Siwashes, so it would seem nearly certain that the Cusick team was named for the local tribe.