About the Siwash (Haida Gwaii) sealers in Hawaii

From the land of Pidgin English, an absolutely fascinating interview in Chinuk Wawa…

I dare you not to love this one!

ABOUT THE SIWASH SEALERS.

Their Language Is Decidedly A Mixed One.

THEY ARE HAVING A GOOD TIME.

But Are Astonished to Find No Seals here — They Have No Idea of Their Whereabouts, But Supposed They Were on the Usual Sealing Grounds.

Mention was made in yesterday’s ADVERTISER of the sealing schooner Mascot and her crew of Masset Indians. The general demand to know something about the latter led to a visit of a representative of this paper aboard that ship yesterday, together with a gentleman thoroughly conversant with the Chinook language, which is spoken by the crew.

The Chinooks are a family of Indian tribes on the northwest coast of North America. They formerly inhabited both banks of the Columbia River, from its mouth to the Great Dalles, and were broken up into nuoderous bands. The language varied as the tribes entered further into the interior. In all its dialects it is very complicated and difficult to pronounce. This led to the composition of the Chinook jargon, used by the traders, containing some Chinook words with terms from the French, English and many Indian languages, all corrupted into a new form. This jargon is used very extensively in the region of Puget Sound, and is acquired by many of the whites as well as the Indians. 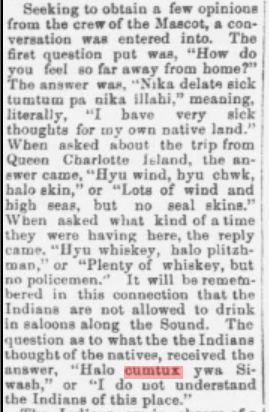 Seeking to obtain a few opinions from the crew of the Mascot, a conversation was entered into. The first question put was, “How do you feel so far away from home?” The answer was, “Nika delate sick tumtum pa nika illahi,” meaning, literally, “I have very sick thoughts for my own native land.” When asked about the trip from Queen Charlotte Island, the answer came, “Hyu wind, hyu chwk, halo skin,” or “Lots of wind and high seas, but no seal skins.” When asked what kind of a time they were having here, the reply came. “Hyu whiskey, halo plitzhman,” or “Plenty of whiskey, but no policemen.” It will be remembered in this connection that the Indians are not allowed to drink in saloons along the Sound. The question as to what the the Indians thought of the natives, received the answer, “Halo cumtux ywa Siwash,” or “I do not understand the Indians of this place.”

The Indians are in charge of a great big fellow who is called the “tyee” [‘chief’] and who manages the business for the crowd. Whenever there is any dispute between the captain and any of the men, the tyee is made the committee on arbitration. When the Indians set out to rescue the three Japanese fishermen on Tuesday night the “tyee” fell down the hatch and hurt his back quite badly.

It will be remembered by many, that the best Indian canoes made for the Smithsonian Institute were Ihose of the Masset Indians to which tribe the crew of the Mascot belong. In sealing these Indian hunters prefer their own boats to any made bv white men and can do better work in them.

Those of my readers who are well-acquainted with Chinook Jargon have already noticed that the Hawaiian reporter and/or typesetter have left syllables out of some CJ words!

A closer look (I’ll use the English translations given in the article, as they’re perfectly fine):

“Nika delate sick tumtum pa nika illahi”
náyka dlét sík-tə́mtəm kʰupa nayka ílihi
I very hurt heart for my land
“I have very sick thoughts for my own native land.” (according to the article)

That’s recognizable as good BC Chinook Jargon. The occurrence of just one negating word, < halo >, and the use of certain words like ‘whiskey’ and ‘policeman’, are among the indicators.

Even more than the linguistic value of these quotations, though, I think today’s article is wonderful for its documenting a late frontier-era industry that was very important in the northern parts of the Pacific Northwest coast.