“The Bridge Across the Willamette”: PDX attitude goes waaay back! (To Grand Ronde?) 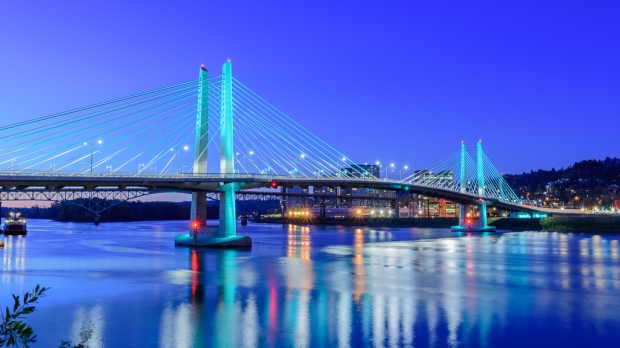 From an article about hopes for a great city of East Portland (EPDX?), Oregon, an inspiring poem:

Because in that era, poems were often the major vehicle for campaigns to motivate public opinion. For example, the U.S.S. Constitution was saved from dismantlement by the wide newspaper publication and no doubt frequent public recitation of “Old Ironsides” by Oliver Wendell Holmes. The use of entertainment to politically incite the masses is nothing strange to the Portland I know and love…

This bit of verse exhibits every mark of the smarty-pants Oregon frontier humor, and the relentless optimism, that all evidence shows led us directly to “Portlandia” and militant bicyclists. I vote for a bronze plaque of this poem to be bolted to Tilikum Crossing!

And yes indeed, because the settlement frontier was still a living thing, there’s five lines in untranslated Jargon for readers’ discerning enjoyment.

Read now, and catch up with me afterwards for a commentary…

Behind the pines had sunk the sun,
And darkness hung o’er Oregon,
When on the banks o’ Willamette
A youth was seen to set and set,
And set and sing unto the moon,
A wild yet sweet, pathetic tune–
“They’re going to build, I feel it yet,
A bridge across the Willamette.”

The flat boat drifted slowly o’er,
And reached at last the other shore.
The Captain–brave courageous soul!–
Fished her to land with fishing pole–
When hark! from o’er the waves a strain–
That youth, that voice, that wild refrain,
“They’re going to build I feel it yet,
A bridge across the Willamette”

Dark grew the night, the south winds blew,
Down came the Oregonian dew;
Down mountain sides the torrents pour’d,
The streamlets rose, the rivers roar’d–
Still sung that youth of webbed toes,
‘Neath umberell, in rubber clothes–
“They’re going to build, I feel it yet,
A bridge across the Willamette.”

A citizen of Yarmany
Who heard him from the brewery,
Sang out, “Young fellow, shtop dot shouet!
Dot pridge, you bet, was pout blayed ouet;
Some dings I know I tole you soons
Dem land agents was d–d schmart coons
Dot eye vas in my pridge, you bet!
Dot pridge across dot Willamette!”/

Yet still, sat on the river bank,
A man, bald headed, lean and lank,
Grown old, still singing the same tune–
“‘Tis coming, coming, coming soon!
They’re going to build, I feel it yet
A bridge across the Willamette.”

Years pass’d–there came a trav’ler roun’
To visit the East Port and town,
As on the river bank he stood,
He saw a sight that froze his blood
Right there, beneath the glaring sun,
There sat a ghostly skeleton,
Which turned its hideous, fleshless head,
And grinned most horrible, and said
“They’re going to build, I feel it yet
A bridge across the Willamette.”

If you’re going to keep me honest, you’ll expect me to label today’s poetry another example of Chinook Jargon doggerel, a genre that I take glee in making my readers aware of. Okay, okay.

But now I’m going to argue that the above rhyme is also a beautiful expression of fierce pride in Pacific Northwest life.

Its chosen diction is regular-folks talk — like “set and set and set”, and “rung” instead of the formal “rang”, and the funny-accented German immigrant (whose loyalties may be divided, as he’s a “citizen of Yarmany”…but he’s a Portland brewer!).

Its youthful Greek chorus is a Webfoot (plural, quirkily enough, “Webfoots“), a label that Settler Oregonians gladly took on very early in their history.

And the Chinuk Wawa-speaking Indian represents a sense of deep Oregon roots and the desire for the best to happen there. He’s a Módoc, rather than something more local like a Kalapúya or a Chinóok, mainly in order to fit the meter of the poem. And his Jargon is far from authentic, as you’d expect from its having been pounded with a blacksmith’s hammer to fit the Settler author’s structure; as my readers must have heard me say a hundred times, it’s nearly impossible to make a rhyming, rhythmic, and grammatical poem or song in Jargon.

So now a few more words on how we can prove that this is fictional Chinook.

First, it would be awfully hard to quote anyone spontaneously speaking any language, and have it happen to fit iambic tetrameter! (Cheat note: this means every second syllable is stressed; eight syllables per line.)

Second, and this is going to turn into a racism trigger warning, “fit” here means “fit really badly”, because the Jargon is so dominantly trochaic (cheat note: the first of every two syllables is stressed) that in the context of the other stanzas of this poem, the chief’s language sounds ridiculous to both English and Chinuk Wawa speakers. Because you can either say it with proper Jargon stresses, and not be iambic, or else say it iambically, and not be Chinook. The fact is, the chief’s speech is intentionally written trochaically, the reason being to evoke the the stereotypical “Indian drumbeat” rhythm of “The Song of Hiawatha” and the “Hamm’s Beer bear commercials“.

Well, at least every line is still eight syllables…

Third, the “Modoc” chief’s speech just happens to violate Chinuk Wawa grammar, in just the same ways that English poets conventionally alter our grammar to fit the demands of proper rhythm. That’s become a standard practice that raises few Anglophone eyebrows (though ultimately it’s foreign, modeled consciously on Greek and Latin verse forms). But it’s something that never, ever existed in Jargon-speaking communities, so the result is very confusing Chinook.

Here I’ll try analyzing the Jargon section, with every fourth line below showing my attempted translation into English:

That yah in the second line is a nifty oddity. We can tell that it’s meant to be just one syllable — there’s already seven other syllables indicated in the line. Of course there’s no word like yah in the old dictionaries or documents published by 1874. So what does this little word mean? Could it, kind of astonishingly, be a previously unknown early recording of Grand Ronde creole Chinuk Wawa’s unique ya, the short form of yáka ‘he, she, it’? I feel that that meaning fits all right with the apparent meaning we can glean from the rest of the chief’s words.

All same white man wouldn’t be found, either, in Chinook Jargon dictionaries of the era. But all same is recognizable as pidgin English, specifically the variety spoken by Chinese immigrants, and in real fact it turns up quite a lot in quotations of Chinese and Native people’s Jargon usage. Likewise white man is a very common expression in everyone’s speech as we find it documented from the frontier; it’s only because it’s a couple of “obviously English” words that it’s left out of the Jargon dictionaries, which customarily saved their energy to point out seeming oddities (from the Anglophone perspective), such as the use of Boston to mean the same thing.

Gumstick deserves a comment also. The usual meaning of the rare 19th-century British word “gumstick” was something like our modern “pacifier” or “soother”. I feel some confidence that that’s not what the poet had in mind. Instead, I perceive an English-influenced variant of the well-known Chinuk Wawa la gome stick, as George Gibbs spelled it, for ‘pine tree’. We have actually discovered gum-stick previously, in Victoria, BC Jargon usage.

← Now you know: I think “pittuck” is from Salish (+a Chinuk Wawa meditation)
Masi & hayu masi →