My dad was a Chinook interpreter

Heck of a story.

“Parks and Redwoods, 1919-1971: Oral history transcript” is “an interview” of Newton Bishop Drury (1889-1978) “conducted by Amelia Roberts Fry and Susan Schrepfer. It’s at the Bancroft Library of the University of California – Berkeley. 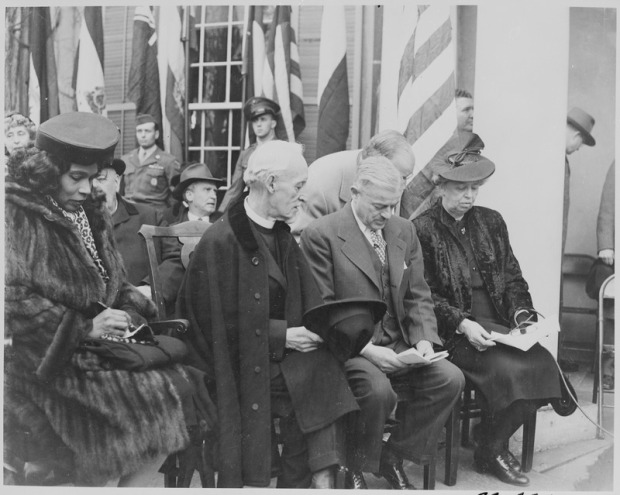 NB Drury next to Eleanor Roosevelt

There’s a swell portrait of NBD in the book by none other than renowned photographer Ansel Adams, but I like the above image with Marian Anderson and Eleanor Roosevelt.

This fella’s dad, Wells Drury, grew up in Oregon at just the right time. Born September 16, 1851 in New Boston, Illinois, he lived there a grand total of two months before the family upped and emigrated to Oregon Territory, and eventually to Washington Territory.

Which is why the son was able to recount some interesting family lore about territorial times. His dad Wells was appointed by the President as a Chinuk Wawa interpreter–at age 10.

This is where it helps to be a critical reader…

The claim that Wells interpreted at Isaac Stevens’s Medicine Creek Treaty negotiations has to be mistaken (he would’ve been 3 years old), but maybe it’s a family memory of Wells’s stepfather Elbert Elder helping out on the sidelines there. On the official document only Benjamin F. Shaw is listed in that capacity, but a number of other whites present knew Jargon and are known to have assisted informally.

The transcript claims young Wells went on to interpret in a war with the Warm Springs (Oregon) Indians. If this refers to the 1877 Nez Perce war, it’s plausible. Otherwise, it’s likely another time-ravaged memory of Elbert Elder from the several 1850’s Indian wars in the Pacific Northwest.

Abe Lincoln and General US Grant, who we’ve seen on my website previously, show up:

From Indian Interpreter to Printer

Drury: One of the earlier experiences of my father up in
Washington Territory, where they moved from Oregon,
was as an Indian interpreter when he was ten years
old during the Lincoln administration, during negotia-
tions for the Medicine Creek Treaty.

Fry: That was pretty young, wasn’t it, to be an employee of
the Federal government?

Drury: Yes. His foster father, Elbert Elder, had been a
neighbor of Abraham Lincoln in their youth in Sangamon
County, Illinois. When Lincoln was elected, Mr. Elder
wrote to him; I suppose he asked for a government job
or something he could do. And having confidence in him,
Abraham Lincoln appointed him as interpreter to the
tribes that speak the Chinook jargon; they are along the
Washington coast. He was asked to name deputies. My
father as a boy had mastered the Chinook speech; they

Drury: called it jargon. It was a sort of pidgin English, I
think, or at least it was a rather elementary language.
Elder wrote that he would like to appoint his stepson,
who was then about ten years old. And after consider-
able argument about it he was appointed.

Fry: Do you have any letters now in your files about that?

Drury: I have a copy of the letter that my father wrote to a
cousin, Marion Drury, in 1872. It was addressed from
Monmouth, Oregon, and it gave the history of this ap-
pointment.

Fry: I was wondering if there would be any Abraham Lincoln
letters in the files.

Drwry: I don’t think so. One of the unfortunate things is
that in the Berkeley fire, I believe in 1924, my
father’s scrapbook, which had a tremendous amount of
interesting material, was burned along with the other
family records. The things we have now were either
gathered afterwards from his sisters or were in the
files of the Drury Advertising Company in San Francisco.

Fry: That’s an argument for getting these things put in an
archives library as soon as possible.

Drury: That convinced me, yes.

Fry: How did your father happen to learn this Chinook jargon?

Drury: Oh, I think by playing with the Indian boys.

Fry: There was a lot of free socializing, then, between the
Indian families and the white?

Drury: Oh, I imagine so, yes. I don’t think they were one of
the most highly developed tribes. One of the things I
remember was that my father had a hole in the muscles of
one of his legs which he said came from having been struck
by a spear that some angry Indian had thrown at him. It
wasn’t an Indian war, but it was a quarrel and he got

Drury: this wound. Something had happened that the Indian
didn’t like. Maybe he thought he hadn’t gotten a good
deal from the government, or something. Nothing
serious. I notice in these papers–I have no recollection
of my father talking about it [–] a letter from a Mr. Owen
to his friend or relative, a Mr. Pottol, telling the
fact that my father was engaged in some of the Indian
wars in the early days. This letter was addressed from
Oakland, California, to Mrs. Laura Leed Pottol’s father.
It says that “One of my boyhood associates, Wells Drury,
became a captain in the state militia, and was sent east
of the mountains to fight the Warm Springs Indians who
had started on the warpath. He knew enough to hold
their confidence and was quite influential in getting
the Indians to return to the reservation without a
fight . ”

Apropos of that, I remember my father talking about
his days in the militia, including a visit that they had
from General U.S. Grant when he was touring the West.
He mentioned the fact that they were in their best uni-
forms and all spruced up. Grant looked at him and he
said, “Young fellow, in all my military career I never
had as fine a uniform as you have.” (Laughter) Grant
wasn’t noted for his military spic and span qualities.
I think it happened up at Olynpia in Washington; that’s
where they had their headquarters for the Indian service. (pages 8-10)

Do any of my readers have family stories that involve Chinook Jargon?