A Chinuk Wawa expression unique to the Kamloops, BC area is:

literally “kettle cloth”, as in this interesting passage:

kopit ukuk tintin xaws: pi klaska iskom ayu
finished the belfry: then they got a lot of

“Kettle cloth” stands right out as an expression we haven’t seen in the Jargon literature before.

As I’m accustomed to doing with new Jargon finds that involve words from English, I went searching in 19th-century anglophone books for clues.

And there weren’t many!

Google Books mistakenly sent me into an 1883 “Illustrated Dictionary of Words Used in Art and Archaeology“, which turned out to be an entry on page 225 for:

Nettle-cloth. A material made in Germany of very thick cotton, used as a substitute for japanned leather, on the peaks of caps, &c.

Nettle cloth was a muslin/linen woven indeed from nettle, having the comparable German name Nesseltuch or Nesselstoff. We know from Pacific Northwest indigenous cultures that this is a fantastically strong fiber (I’ve found nettle cording impossible to break). The proverbially resourceful Swiss Army knew this:

Following this lead, I find an 1851 “Official Descriptive and Illustrated Catalogue” from a textile trade show that portrays “nettle cloth” as a new import from Germany: 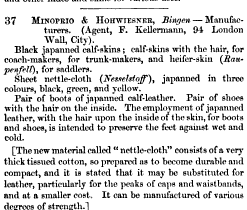 [The new material called “nettle-cloth” consists of a very thick tissued cotton, so prepared as to become durable and compact, and it is stated that it may be substituted for leather, particularly for the peaks of caps and waistbands, and at a smaller cost. It can be manufactured of various degrees of strength.]

Anyway, aside from the above 1883 false positive–or is it? read on–I found no 19th-c. examples of “kettle cloth”.

There were plenty of hits for popular books of “The Adventures of Captain Kettle”, cloth-bound. See how that works? But those don’t count.

It isn’t until 1977 that I find the exact phrase “kettle cloth” used, in the Federal Register, for a variety of greige (grey-beige) fabric. That’s much too late to be connectible with Kamloops Wawa.

So: was kitl sil in Chinook Jargon from a folk etymology / eggcorn “kettle cloth”  in English, by native French-speaker Father Le Jeune of Kamloops Wawa, for “nettle cloth”?

That’s the best hypothesis my research lets me make. I can only speculate on the reasoning involved.

One thought on “Kettle cloth”