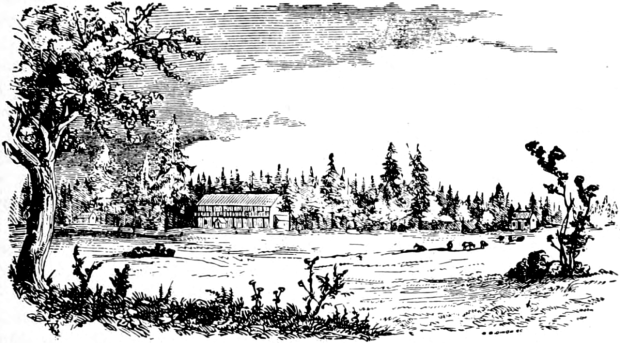 Some interesting bits from a promotional book about unnamed missionaries.

No author is named in the volume, but it’s attributed to Zachariah Atwell Mudge, not to be confused with another Pacific NW luminary, Zachary Mudge of George Vancouver’s 1792 expedition.

“They landed at Fort Vancouver, June 1, 1840…Some left for Puget Sound; others were appointed for the Willamette Valley; and still others for the Calapoosa [Kalapuya] country, far up the Willamette.” (pages 13-15)

“The Indians have a superstitious respect for these [rattle]snakes. They never kill them. They say, if they should, the “tamanas,” or spirit of the murdered snake, prompts his living friends to revenge his death by biting his destroyer.” (page 29)

There’s no such thing as coyotes yet, in English; just “prairie wolves” as opposed to the “forest wolves” (page 30 and following).  “Indian tradition says that “Talipaz,” that is the “Prairie Wolf,” was the creator of all things.” (page 47) “…even their dogs, which much resemble the wolf, being doubtless possessed of some wolf blood, they treat with great respect, on account of their supposed relationship to Talipaz.” (page 48)

Indians of the Dalles area are mostly represented as talking pidgin English, lapsing into standard English for the benefit of the reader, for example: “See, me no got coat…and me no got pants…Me poor, o, very poor!…Mr. B—-, you are a man, a great man…” (pages 44-45)  Sometimes this speech could be calqued on Chinuk Wawa: “O, you great doctor!  My heart is large toward you!” (page 61)

“When a young man wishes to become distinguished, he goes out at night,— perhaps some night when the clouds overhang the sky,—and an awful mystery seems to enshroud the object of his adventure. He claims to meet either Talipaz or his spirit. Sometimes he says, “Tamanawas,” that is, a moving spirit of power, “came upon me.” He now knows what is to befall him, or he vainly thinks, in his superstition, he knows more than common mortals. He claims to be a great “medicine man;” and, strange enough, his people allow his claim!” (pages 48-49)

In November of 1843, Mt St Helens erupts (page 104 and following).  It’s part of the President’s Range.  “The highest is Mount Washington, the next Mount Adams, and so in the order of the presidential administrations” (page 107).

William M’Kendree is an orphaned Native boy who helps around the mission; Chinook Jargon is spoken of as it were his native language: “In his Indian language, he would exclaim, “Wake siar nika nanage Boston ileha,” — “It will not be long before I see the the United States.” (page 110)  He winds up becoming a member of Colonel John C. “The Pathfinder” Fremont‘s second expedition, traveling toward the coast, then southern Oregon, and eventually to Washington, D.C.

About chief Equator: “His head was not flattened, like those of his tribe. He used to say, jocosely, that his parents tried the usual methods of giving it the fashionable shape, but that it was too hard to be thus molded. He was therefore known, to some extent, as the “Boston chief,” because he had a head like the white men.” (page 118)

“She, however, became the wife of a “King George’s Man,” a name by which all the English are designated by the Indians.” (page 164) Dala in the Jargon used to mean not just money but anything made of metal, or shiny: “”You lose spoon,–a dollar spoon?” meaning a silver spoon.” (page 210)