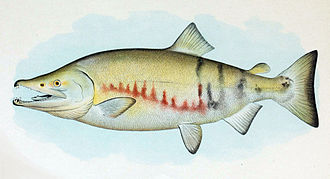 Emma [Luscier]: there are no Quinault-salmon in Shoalwater Bay. But there are lots of dog-salmons jumping in the Palix river here, the whites call these in [Chinook] jarg[on]. tsʼαm̓ salmon, in regular Eng[lish]. dog-salmon. Emma once askt Mr. Lɪn Bush, How is it that the Whites call it dog salmon when it is a good (savory) fish? It does not sound good. Mr. Lɪn Bush answered: It is because it has teeth like a dog. = [Lower] Cheh[alis]. ĸʼwαɬá·ɬtsʼ, which means lit[erally]. spotted fish – just as jarg[on]. calls it tsʼαm̓ salmon. But really it is the most savory salmon we have over here.

I appreciate all the information there about various people’s use of 3 languages on Shoalwater Bay, Washington, a.k.a. Willapa Bay.

And the Upper Chehalis Salish dictionary says qʷəł-áł-cn̓ ‘dog salmon’, really similar — but that qʷəł seems a mistake for q̓ʷəł ‘marked’, and the -cn̓ part would be Salish for ‘mouth’! (Also the dictionary entry cites a Lower Chehalis form that I haven’t found anywhere in the documentation of that language.) Hmm…

Rare synonyms in Chinuk Wawa are:

Finally a comment that some of the frontier-era Settlers whose words we turn to in our research used an English synonym “trout” or “salmon-trout” for this fish. (The term may have extended to other species too, but I believe most folks realized it was specifically the dog salmon.) Father St Onge’s 1892 manuscript dictionary of the Jargon defines < tsom samon > as ‘trout’.