Another connection between the 1893 Chicago World’s Fair and Chinuk Wawa.

Is this the one? “Large log for the Mechanics Pavilion for the 1893 World’s Fair in Chicago; Seattle” (Image credit: Wikimedia Commons)

This time, a written message. 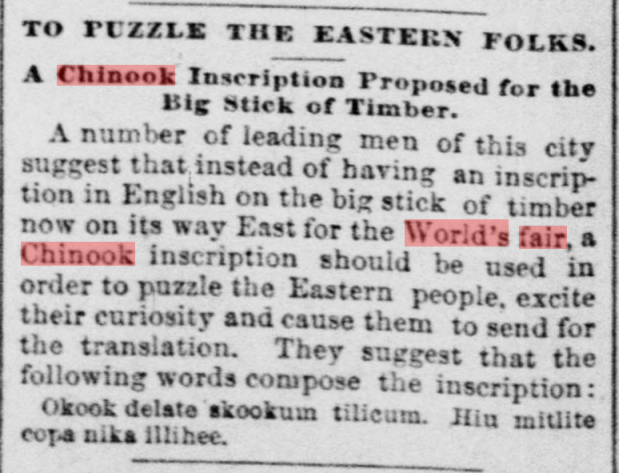 TO PUZZLE THE EASTERN FOLKS.

A Chinook Inscription Proposed for the Big Stick of Timber.

A number of leading men of this city suggest that instead of having an inscription in English on the big stick of timber now on its way East for the World’s Fair, a Chinook inscription should be used in order to puzzle the Eastern people, excite their curiosity and cause them to send for the translation. They suggest that the following words compose the inscription:

Typical for the post-frontier era (even just one year into that time), skookum ‘strong’ is being used here by Settlers in a novel sense of ‘excellent’.

And we should expect oldtime written Chinook Jargon to be Settler speech, because it was mostly Settlers who could read & write —