1887: A Ramble in British Columbia 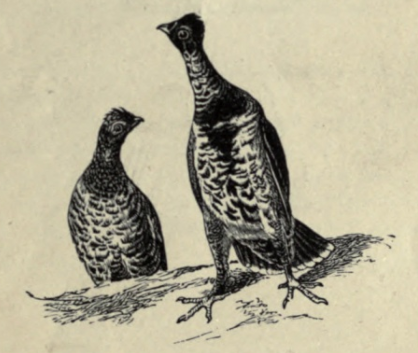 from the title page

A book that we’ve only briefly touched on has a tiny bit more to tell about Chinuk Wawa in BC.

This was in connection with the delightful Chinook Jargon expression < halo jawbone > ‘no credit’, i.e. the sign over the bartender’s head saying “In God We Trust — All Others Pay Cash”.

Unfinished business remains, though, in the form of further Jargon found in this lighthearted late frontier travelogue volume. There’s also the running joke of reproducing the menus of the travelers’ meals, from royally elaborate onboard fare during their Atlantic crossing to whatever they manage to hunt up in the BC backwoods.

Plus, a bunch of awesome photos and cartoons — much more than I can cram into this post, so go read the book for free online. 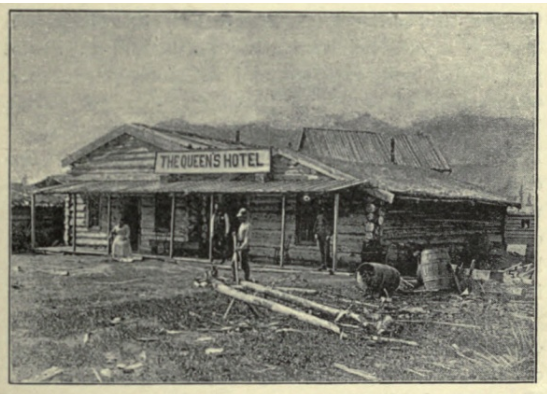 In the vicinity of Sinclair Pass (named for a traveler headed to the Hudson Bay Company’s Cowlitz Farms), a synonymy that makes me wonder if “Siwash berry” might be a folk etymology of “serviceberry”, or a representation of a local Chinook Jargon phrase s(h)áwash úlali:

Here also was a profusion of raspberries, and a blue berry not unlike a large wimberry, but growing on a bush often several feet in height; this is known as the Service or Siwash (the latter word meaning Indian) berry, or the Sasketoon, and is good.

On page 125, some Native men, surely Kootenays, travel past with what appears to be the same mountain sheep the trekkers had just caught and skinned. A conversation that’s not directly quoted seems to have occurred in Chinuk Wawa, despite the authors’ typically representing themselves as poor CW speakers.

On page 133, traveling companion “the Skipper” replies to someone’s accusation against him in the following unprintable fashion:

The above novelty (I take it as these young men’s sense of humor) earned them some earnest puzzlement from at least one book reviewer!

We learn that the fur-trade era word “bateau” is still used in the Kootenays for the huge flat-bottomed freight boats resorted to in times of low water (pages 148-149).

The travelers spend (page 154) a bit of time with “the well known traveler and hunter Baillie-Grohman”, a Chinook Jargon speaker who we have seen in other posts on my site.

At Cranbrook, some interesting evidence that White government officials were indeed known in Jargon as < tyee > ‘chief’:

A long and silly doggerel poem unfortunately contains only as much Jargon as fits into its title:

(I feel an obligation to make you aware, the above is grammatical, but isn’t necessarily a Noun Phrase, in Chinuk Wawa; I’ve only translated it like that in English because, well, in bástən literary culture that’s conventional. To use the above phrase in CW, you’re well advised to employ it as a Relative Clause — e.g. in mán (yaka) hayas-kə́mtəks t’łəmínxwət ‘a man who’s a great liar’.)

On page 256, the authors mention that in southeastern BC “none of the Indians we have met speak any English”. Hmm. This helps explain the observed fact that Jargon remained in use there later than in other subregions of the Pacific Northwest.

Above is one of the many cowboy Spanish words that our narrators delight in hearing & using in BC. Another one, which actually surprised me, was their favorite camp food, the tortilla (“torteea”, pages 239-240).

Below, an exaggerated misunderstanding of a Lower Kootenay man’s use of Chinuk Wawa: 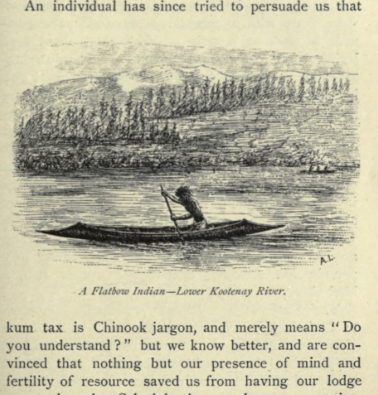 For such young guys, this insistence on taking kə́mtəks as ‘income tax’ is the mother of all Dad jokes.