…where do I begin?

But I’m heaving a sigh, because the more that LBDB tries to closely translate well-known songs from English, the clunkier her Chinuk Wawa gets.

And that’s a shame, since I’ve prove that she was a genuinely fluent speaker.

But I suppose her purpose is served anyway, in giving Pacific Northwesterners of the post-frontier era some music to sing that’s both familiar and uniquely their own.

I have to say, though, JUST TRY SINGING THIS! It’s murder.

Just as it’s rare to be able to rhyme in Jargon, it’s dead hard to copy the poetic rhythm (meter) of English, as you’ll learn here…

And the unintended result is that we have here some “atrocious music“. For any of you who don’t know this USA patriotic hymn that so many of us here were indoctrinated with, the original English lyrics come after our examination of the Jargon translation… 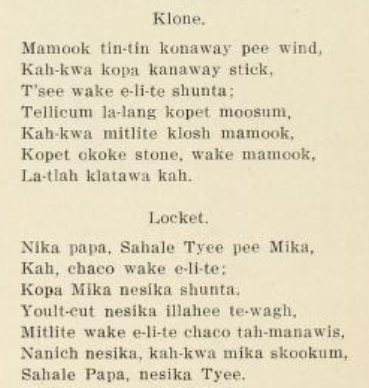 kákwa [1] máyka ‘it’s like you’ occurs twice or more in the translation. Seemingly, LBDB meant to say kʰupa máyka ‘to you’. A really odd mistake for a fluent speaker.

t’sí ílihi [2] ‘sweet land’ is flowery, overly metaphorical talk, which I’ve shown is just not part of Chinuk Wawa culture. It’s a literal transaltion from English, and it would only make sense if you were acquainted with English literary traditions.

wík-iláytʰi(x) [3] is kind of interesting for its creative attempt at saying ‘free’, but that’s a foreign concept so it really comes across just as a literal expression, ‘non-slave’.

yúłqat [6] nsayka ílihi t’wáx̣ — Here LBDB is unexplainably confusing the physical dimension of length (yúłqat) with the common word for ‘long time’ (líli). As we’ve seen in other things she wrote, she had become out of practice at talking Jargon in her older years.

The translation is grammatically flawed, and it takes on the unattainable task of giving a literal rendition of the English lyrics. The result is worse than doggerel.

Here are those original lyrics:

My country ’tis of thee,
Sweet land of liberty,
Of thee I sing:
Land where my fathers died,
Land of the pilgrims’ pride;
From every mountain side,
Let freedom ring.

My native country thee.
Land of the noble free —
Thy name I love;
I love thy rocks and rills,
Thy woods and templed hills;
My heart with rapture thrills
Like that above.

Our fathers’ God! to Thee,
Author of liberty,
To Thee we sing;
Long may our land be bright
With freedom’s holy light;
Protect us by thy might,
Great God, our King!

So there you go. Do you think you could sing this in Jargon?

Will you please share a video of your attempts?!?!?!