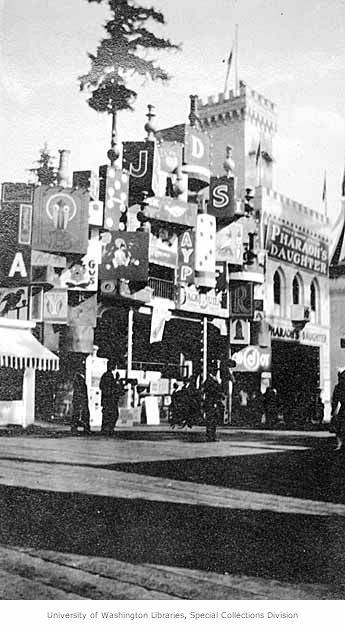 “House that Jack Built” amusement on the Pay Streak in the Alaska-Yukon-Pacific Exposition, Seattle, 1909 (image credit: University of Washington Libraries)

(A) an Astorian (which would make him old enough to be Mrs. Downey-Bartlett’s grandfather), or

(B) the California gold-rushing father of Granville Stuart (which would make him old enough to be her dad), or

(C) was he someone else, seemingly from Oregon?

That’s a tricky one. “Robert Stuart” is one of those Scottish equivalents of “John Smith”, a super-common handle that a whole lot of guys went by.

I’m tending to think that the Robert Stuart discussed below (in Jim Holton’s great book on Chinook Jargon, which you ought to get a copy of) is choice C.

Not that I’m finding any biographical info on him anywhere, but the sheer fact that he was writing literary CJ suggests he was a post-frontier denizen.

Now to show you a sample of Stuart’s Jargon; I’d like to add a couple of comments below it…

Part of page 81 in Jim Holton’s book, with good discussion by him (notice that Jim may have been the first to point out the use of yaka for plurals!)

I have no idea what possessed Stuart to translate this traditional nursery rhyme, but we can be quite glad that he did.

He demonstrates some really excellent Chinuk Wawa grammar with it.

Well, when you look at the first four lines, and compare them with their Jargon equivalents, you can find that one of the relative clauses is not like the others.

Did you spot it yet?

It’s the line describing the malt (i.e. “That lay in the house”); it doesn’t have a yaka in it.

The lines describing the actions of the cat and the rat, which are animate subjects — thought of as humanlike and in control of what they do — do have yaka.

But the malt is thought of as inanimate, and not in control, even of situations that it’s the subject of — which is why its line has no yaka.

You could argue that instead of yaka, what’s used in the malt’s description is my pet Jargon discovery, the silent “Ø” pronoun that expresses inanimacy and indefiniteness.

In the fifth line, as if to seal the lesson with a master stroke, Stuart switches back to yaka in reference to the subject, Jack, who is obviously animate. (He also, quite fluently, uses the “Ø” in this line too, in reference to the inanimate object, the malt.)

In my 20 years of research on fluent speakers’ Chinuk Wawa, I have consistently found this same pattern over and over. Yaka is limited to animate third-persons, a fact that seems not to have been mentioned in any of the old documents of the language. When yaka is not an option due to inanimacy, good old “Ø”, itself unmentioned by previous authorities, is consistently pressed into service.

Robert Stuart, whoever he may have been, deserves a hearty thanks from us for a lesson in this fine linguistic point. You might think of it as “the grammar that Stuart helped build”!

← Remembrance of veterans past?
A Yukon pidgin: Slavey Jargon →