Quileute’s Chinuk Wawa (and other) traces 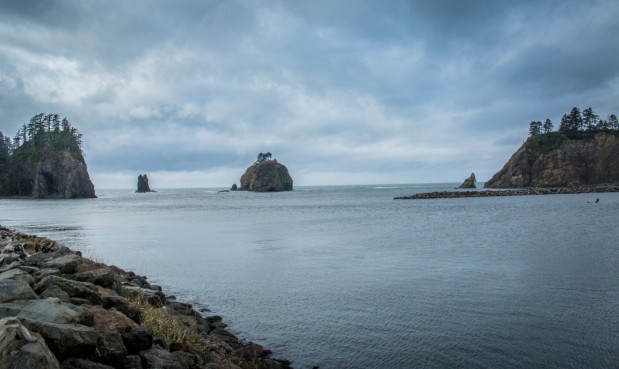 I’ve gradually been looking through linguistic documentation of Indigenous languages that have borrowed Chinook Jargon words, and today I come to Quileute…

…Quileute is interesting to us linguists because it’s unrelated to any language now spoken. It’s a sister language of the now-dormant Chemakum, which was spoken on the other side of the Olympic Peninsula, near modern Port Townsend on northern Puget Sound. The grammar of these languages is in some ways similar to Salish, although my impression is that Quileute is far more complex in certain respects.

For us on this website, Quileute is also neat because it preserves quite a number of words borrowed from other languages. Since Quileute land was a bit of a stronghold of the Jargon (we even have a letter in it written by Howeattle in the 1880’s), there’s a lot of really beautiful Chinuk Wawa here, in its precise old-school pronunciations, as well as a good deal of “stealth” CW in the form of expressions that use Quileute words to say CW ideas. [Those expressions, also known as “calques” / “loan translations”, are set off in square brackets below.]

There’s also a hefty amount of loanwords from other languages, and the really notable subset of these is from neighboring Salish, most likely Quinault but a close runner-up is Lower Chehalis, which I’ve been discovering apparently gave various regional languages their earliest words — pre-CW ones! — for a bunch of new items traded from Whites early in the contact period.

In today’s tally, I’m leaving out some words that are at least as likely to come from English as from Chinook Jargon, such as those for ‘Mexico’, ‘mile’, ‘Christmas’, and so on, although virtually all of these are in fact known in the Jargon from Kamloops, BC. I’m also leaving out the names of places in other ethnic territories, as long as those names are not significantly Quileute-ized.

A brief key to the more unusual symbols here: underlined k = /q/ (the back-of-the-mouth sound); underlined a = /æ/ (as in Grand Ronde Chinuk Wawa pʰæ ‘pear’ or English “cat”); any vowel plus a mid-level dot < · > is pronounced long. Ejective sounds are written much as they are at Grand Ronde, so for example c’h = the popping “ch”.

WORDS FOR BUILDINGS/STRUCTURES DEVOTED TO A SPECIFIC FUNCTION:
Those in -awis[-ti] may have come in via Makah, which has that characteristic pronunciation of CW háws

ʔóloli, ʔólali ‘berry (from Chinook Jargon)’ — CW úlali; the second pronunciation is influenced by the word’s form as loaned into local English (“olallie”)

(???) [bás-t’owa] ‘sickness’ (‘bad-sickness’) — somehow I’m not locating the reference right now, so take this with two grains of salt, but in CW I seem to recall having seen an expression masáchi-sík ‘bad/fearsome illness’

kás[-łibit] ‘railroad’ (‘car(s)-road’) has to be an older word, being a loan translation of Jargon t’síkt’sik-úyx̣at, using the known CW synonym < ka(r) > ‘train car(s)’. Also note that the more recent Quileute kaslíd ‘gasoline, fuel’ and the several automobile-associated words formed on the root kas (‘I got a car’, ‘I wanted a car’, ‘he went by car’, ‘tires (of a car)’), probably piggybacked on the already existing Chinuk Wawa loan kás (a morpheme which is not pointed out in the Ql dictionary), since it would be unexpected for any direct loan from local informal English ‘car’ ( = auto) to occur in the plural! Contrast the more recent-seeming loan form in chilós ʔáxʷ saʔ ká· ‘use that car (imperative)’.

laká·bid ‘dumpling’ — a notable new meaning, but certainly an understandable one (it so happens I made chicken & dumplings this weekend!) — CW lakamín ‘soup, stew, gravy; any cooked food requiring mixture/stirring’

laló·s ‘rose’ — a new discovery for Chinuk Wawa, which in this remote corner of Washington is far more likely to have brought the word than French is

(???) -patska ‘bow, weapon (lexical suffix)’ (I include this in my list because the freestanding full word for the same weapon is totally different and presumably native Quileute: táxʷłoʔ) — CW has upq’ati ‘bow’, whereas the better-matching word is CW uləptski ‘fire’; is it possible the Quileute word denotes a fire-starting tool, the bow drill? Otherwise a chance resemblance

(???) pí·t’ła ‘full, fart, yellow’ — I can’t vouch that the second and third meanings aren’t native in Ql, but for the first, compare CW pʰáł ‘full’

potcholáy ‘Fourth of July holiday’ — perhaps via CW, given the pronunciation changes; expressions involving the English word July for celebrations are found in other Native languages

tadáps[-t’ikʷ] ‘Turnips-head! (a teasing term…such taunting terms were often created using -t’ikʷ ‘head’)’ — as say about ‘car’ vs. ‘cars’ above, I’d expect a recent English loan to use the singular ‘turnip’; words for items of produce were typically, when borrowed earlier, taken in via CW and in the English plural form like this one (there’s also ‘apples’, ‘pears’, ‘grapes’, etc. to be found in Ql)

(???) tsiyá·pos ‘hat’ (apparently a generic; there are several other words for specific types of hat that are obviously native Ql) — compare CW siyápuł; also found in a place name tsistsiyapó·sa ‘Mushroom Rock, lit. having hats on’, which is located nearly at the tip of Cape Flattery in Makah territory; as far as I can tell the Ql pronunciations aren’t the Makah/Nuuchahnulth form for ‘hat’, (t)siyap(u)x(ʷ)s, but a foreign pronunciation of it

MORE LIKELY FROM OTHER LANGUAGES:

(???) bíl[-stadak], míl[-stadak] ‘story, liar, fibber (woman’s term)’ — the dictionary as well as another of Jay Powell’s publications on Chinook Jargon (which gives a final /q/ instead of /k/, and further glosses as ‘a habitual B.S.-er’ and ‘blowhard’) suggest this word is from a hypothetical CJ loan based on French merde ‘shit’. On the balance of the evidence available to me, I doubt that, for just a few reasons:
(1) This would be our only data point in the entire Pacific Northwest for a CJ *mil/*mel, glossed by Powell 1985 as ‘crap’.
(2) Nothing in the dictionary associates this word with the concept of excrement. Interestingly, in the English-Ql section, ‘excrement’ is given only as báksti, a word that I’m not the first to suggest as a possible ancient loan from Salish.
(3) Unlike CJ words, this one is integrated into the typical Olympic Peninsula Native linguistic system in which separate words are used by and for male and female agents/subjects performing a stipulated set of activities, one of which in all of these languages is ‘to tell a lie’. The term for a male telling a lie is kì·dó·tli.
(4) This word participates in the native Ql sound (-symbolism?) alternation of m ~ b, unlike loaned CJ words having an “M” sound in them, which tend to settle on just one pronunciation or the other.
(5) This mysterious root bíl resembles a widespread Salish word for ‘liar, fibber’ etc. that even shows up in Grand Ronde Chinuk Wawa, p’ał(ił), and there are certainly plenty of other Salish loans in Quileute (see below).
(6) It seems it would be rare, if it happens at all in Quileute, for a borrowed noun to occur with verbal inflectional morphology (habitual aspect, I understand from Powell 1985) such as we see in this word (whereas loanwords freely take derivational morphology, form compounds, and become embedded objects in Ql).

chax̣ is a Ql root shape meaning ‘inflate, swell’; it’s interesting to compare this with the shape ~ pux(ʷ) meaning ‘blow’, etc., that occurs throughout the region’s languages, especially when you recognize that neighboring Klallam Salish has a historical sound change from *p > č (that is, to “ch”).

(???) hawí·ho ‘chicken’ — this really looks like a SW Washington Salish diminutive, but I’m finding no similar word in any nearby language

hí·c’ha k‘ʷá· ‘hello, hi’ — widespread but ultimately from BC Coast Salish, where ~ hə́y ch(əxʷ) q’ə (which I’ve been told is literally ‘you’re done (talking)’) is a frequent exclamation of acknowledgment or thanks

(???) hó·kʷa-t’ (‘drift-people’) ‘drifter, white man (lit. one who lives in the drifting place, a ship)’ — this Native metaphor of ‘drifters’ is widespread on the north coast, at least from Lower Chinookan, through SW Washington Salish and Quileute, to Nuučaan̓uł and Kwakwaka‘wakw of Vancouver Island.

kadí·do ‘dog, earlier wool-bearing dog’ — I would think it’s just a coincidence that this word has a resemblance to the term in a fairly distant language, Homalco (northern Coast Salish) č’ianu ‘dog’.

(???) kí·xʷal ‘beat a drum, drum on something’, (???) kʷá·xal ‘beat, pound on something’ — both might be compared with a widespread Sahaptin word kiwkíwlas ‘drum’, widely loaned into SW WA Salish; -(a)l seems to be a verb-forming suffix in Quileute, so we might have here a reanalysis of that foreign loanword

ká·wats ‘potatoes’ (dictionary says it’s “from Chinook Jargon” but really this is an areally shared word along the north coast, up into southeast Alaska)

tobó·bil ‘automobile’ (Due to its divergence from English ‘automobile’, I suspect a pun on Quileute tó·ʔob[-]al ‘pounding, beating’ [as of a heart], which is also used to express the noise of an outboard motor. Note that the root shape tó·(ʔo)b, from a previous *tó·(ʔo)m, can be compared with Lower Chinookan tə́m ‘noise of feet’, túm ‘noise of fire; noise of bear spirit’, further developed into Chinuk Wawa tə́m-wáta ‘waterfall’.)

t’łapá·ʔ ‘bed’ (one of several words for this) — compare Upper Chehalis Salish t’łapayáliyq ‘under a bed’ which perhaps denotes an item, such as the mat padding that was used, rather than a location, so possibily it was an item of trade

tsí·chił ‘gun, shotgun, rifle’ — seemingly from nearby Salish, cf. Lower Chehalis t’síc’hłʔ, which is found loaned into other languages as far away as Oregon

(??)?) tsí·k ‘sharp (edge, blade)’  — similar to some nearby Salish roots such as Upper Chehalis cixʷ

t’salapapó· ‘top, a toy made of a stick stuck through a round root’ — compare nearby Salish t’səlápəpu (literally ~ ‘little spinning thing’)