More of a narrative than a summary, Newton H. Chittenden’s dry-titled “Official Report of the Exploration of the Queen Charlotte Islands for the Government of British Columbia” has surprises in store for the reader.

Aside from his frequent interjection of droll personal opinions, one unexpected note for me was the river name, Slatechuck/Slate Chuck, as well as Slate Chuck Mountain.

The old news is that < Chuck > (tsə́qw) is Chinuk Wawa for ‘water’ as well as for ‘river’.

The new news is that, like other mineral names on the Pacific Northwest frontier, < slate > is a CW word too — one that we didn’t previously know of.

My reasoning is that the valued minerals that were important to Settlers, and extracted with the help of Indigenous knowledge and labour, became words of Chinook Jargon: < gold >, < coal / klale stone > (‘black stone’), < pil chickamin > (‘red metal’ = copper), etc.

The creek’s unique deposits of argillite, a material that was worked by Haida artisans for the lucrative export/tourist trade, would’ve been the subject of conversation with Settler outsiders. the Jargon would’ve been the medium.

The evidence backs up my inference that < slate > was a Chinook Jargon word in Haida Gwaii. The earliest printed occurrence of “Slate Chuck” that I find is in 1876, well within the era of Chinuk Wawa use in that country.

Chittenden’s government report (page 70 of which modestly claims he had a limited command of Chinuk Wawa), is pretty much the next publication to mention Slate Chuck. It also contains valuable evidence for my analysis, in the form of the Jargon stream name, “Skidegate Chuck” of Moresby Island (page 6).

There’s a decent amount of further Jargon evidence in this book. On page 16 Chittenden mentions “a slave (elaidi)”. Then there’s < hyas solleks chuck > on page 65:

Page 67 refers to “klootchmen, papooses and dogs” and page 69 to one chief’s “rations of muckamuck and tobacco” without translating the expressions. (‘Women, babies, and dogs’; ‘food and tobacco’.)

And there’s a visit with the shaman “Doctor Modeets” (remember, that’s a Chinuk Wawa word too) that I suspect brings us another new Jargon discovery: 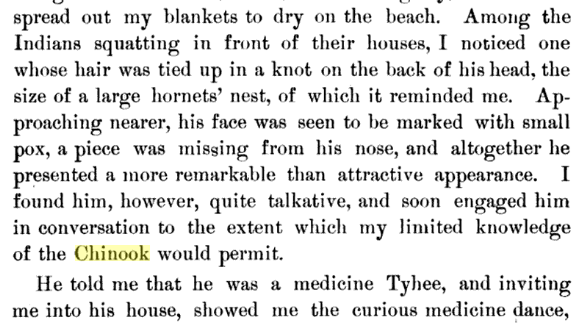 …He told me that he was a medicine Tyhee…

There, the word < medicine > is not highlighted in any way, and you’d be forgiven if you read it as the English word, in a ‘medicine man’ sort of context. But it occurs to me that < medicine > is also a known BC Chinuk Wawa word (also known in the Kamloops Wawa literature; it’s a variant on the older lamatsin from French).

So here we may be looking at a hitherto unknown Jargon expression < medicine Tyhee > (‘medicine chief’) for a powerful shaman.

A tip of the hat to J. Edward Chamberlin’s interesting essay “Klahowya Tillicum” for making me aware of Slate Chuck!