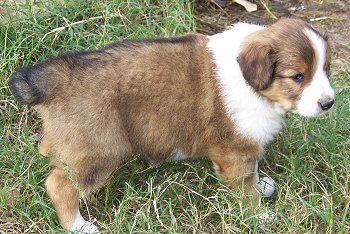 What do you think this dog’s name meant to its owner?

And what do you think of the doggerel poetry below?

Joe Johnson’s dog “Skookum” is so more. He (the dog) mistook a little black-and-tan, belonging to Charles Drosch, for a mountain rat, and took him by the back shaking the daylights out of him. Drosch’s boy, with a little gun, hunted up Skookum and bored him through with lead. Poor Skookum ran home, laid down on the steps, and after a few farewell howls, rolled over and died.

Skookum was born Feb. 31 [sic],1881, was a full-blooded shepherd — less the tail, that appendage being bob — and was sired by Bill Pott’s dog Skookum; dam, Hamilton & Landusky’s Bridget, of the shepherd persuasion, also short of tail. 8kookum was decently interred Monday afternoon, and all the dogs, acknowledging their better, followed in silence their poor brother’s remains.

Poor Skookum is dead.
He lies in bis bed,
With nary a stone
To mark his head.