Today’s article: a snapshot of Chinook Jargon as used in the life of post-frontier “Shokomish” (Skokomish) Indians.

With this bonus feature:

I’d never consciously noticed slahál / bone game / stick game being called “sing-gamble” before. This uncommon, Puget Sound-associated name — which is potentially Chinuk Wawa — led me to the earlier source of this article, Joseph Costello’s book “The Siwash: Their Lives, Legends and Tales“.

In turn, Costello may have gotten the phrase from a Chinookless 1894 article “The Sing Gamble of 1895” in the The Oregon Naturalist (pages 78-79 of volume 2, number 6, June 1895; attributed to the San Francisco Examiner), which looks at different tribes of the same region.

Now let’s get to the article I wanted to show you today, at least to the paragraph that overtly plaes Chinook Jargon on the scene at the event it describes:

Played by Shokomish Tribe, Which Dwells in Vicinity of Puget Sound.

SING AND DANCE WHILE PLAYING

Savages Even Risk Their Wives to WIn and Often Play All Night. 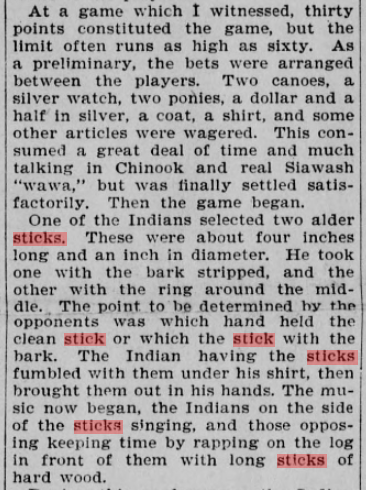 …At a game which I witnessed, thirty points constituted the game, but the limit often runs as high as sixty. As a preliminary, the bets were arranged between the players. Two canoes, a silver watch, two ponies, a dollar and a half in silver, a coat, a shirt, and some other articles were wagered. This consumed a great deal of time and much talking in Chinook and real Siawash “wawa,” but was finally settled satisfactorily. Then the game began…