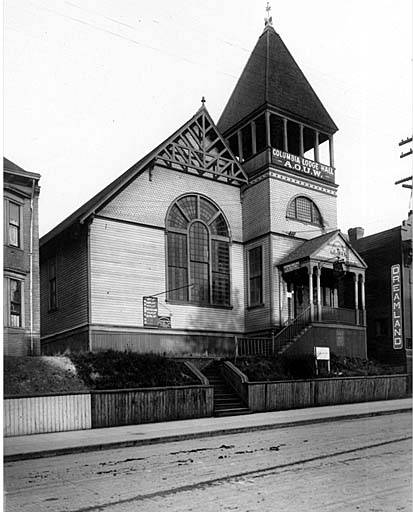 Kind of a sad flipside to my recent post on “B.C. Black History (etc.)“.

In the post-frontier Seattle area, women associated with the Ancient Order of United Workmen put on a minstrel show using Chinuk Wawa.

Doing so in blackface is the new wrinkle, for us.

The use of Chinook Jargon in association with social-benefit societies had a long history all around the Pacific Northwest, as we’ve seen before with the Improved Order of Red Men and so forth.

It was a tradition, and the spellings used were traditional, reflecting what was in effect a standardized orthography of Chinook Jargon that had been settled on in the most popular dictionary pamphlets.

The one possible novelty in this respect is < teezum > below, which might be the work of the comical ladies. It reflects the pretty standard < tzum > or < t’zum > ‘to write’.

It also occurs to me, though, that the variant < teezum > could just show us a newspaper employee reading “copy” to a typesetter who was unfamiliar with Jargon…! 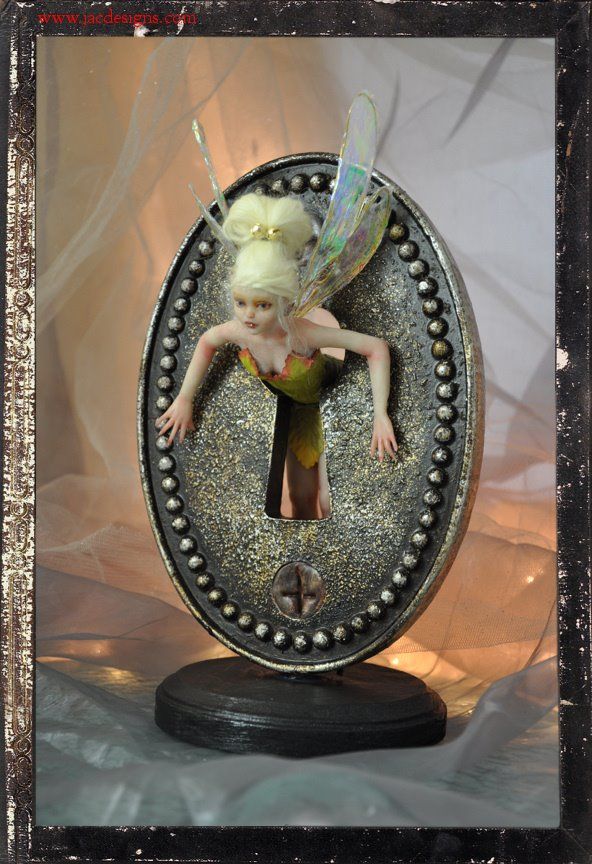 Make what you will of the following spectacle, which combines racialized burlesque with a witch-and-fairy tale. 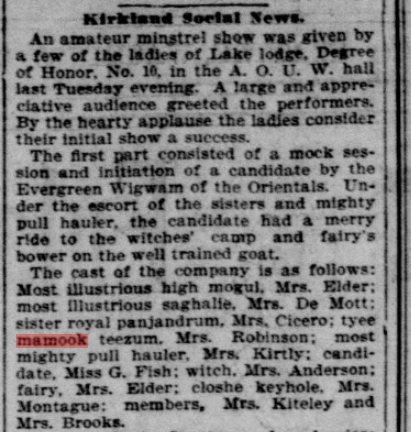 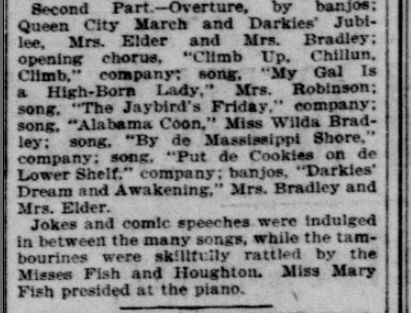 An amateur minstrel show was given by a few of the ladies of Lake lodge, Degree of Honor, No. 10, in the A. O. U. W. hall last Tuesday evening. A large and appreciative audience greeted the performers. By the hearty applause the ladies consider their initial show a success.

The first part consisted of a mock session and initiation of a candidate by the Evergreen Wigwam of the Orientals. Under the escort of the sisters and mighty pull hauler, the candidate had a merry ride to the witches’ camp and fairy’s bower on the well trained goat.

Jokes and comic speeches were indulged in between the many songs, while the tambourines were skillfully rattled by the Misses Fish and Houghton. Miss Mary Fish presided at the piano.

The Chinuk Wawa used above is unremarkable fragments taken from a dictionary, therefore not necessarily all that fluent or grammatical.