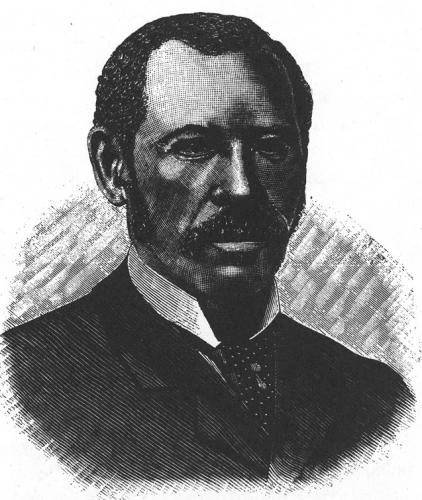 Mifflin Wistar Gibbs (1823-1915) was a remarkable person.One source tells me Gibbs fled US racial tensions after the Dred Scott decision.

In any case, Having first met with BC governor James Douglas and gotten assurances of good treatment, Gibbs led a group of 600 to 800 fellow African-Americans that steamed to Canada in time to capitalize on the 1858 Fraser River gold rush.

Gibbs was elected to the Common Council in Victoria, BC in 1866, and later reelected, but returned to the US shortly after the Civil War, eventually becoming a wealthy judge.

You can read plenty of the man’s own words — including unusually extensive world travel — in his evocatively titled autobiography “Shadow and Light“, where I gleaned a couple of references that indicate Gibbs’ exposure to Chinuk Wawa.

Interestingly or coincidentally, all such evidence invokes the presence of a sort of third party, White people.

January of 1869, at the mouth of Skidegate River in Haida Gwaii (pages 102): we find a Chinuk Wawa phrase for ‘British people’, and an old Indigenous acquaintance from down south in Victoria, where Jargon was much more heavily used…

As the ship passed slowly up the river we were hailed by the shouting of the Indians, who ran to the river side, got into their canoes and followed in great numbers until we anchored. They then swarmed around and over the ship, saluting the ship’s company as “King George‘s men [kinchóch-mán],” for such the English are known and called by them. They were peaceful and docile, lending ready hands to our landing and afterward to the cargo. I was surprised, while standing on the ship, to hear my name called by an Indian in a canoe at the side, coupled with encomiums of the native variety, quite flattering. It proved to be one who had been a domestic in my family at Victoria.

Same locale, page 103: a similar expression refers to a naval ship, using a word (‘man-of-war‘) not well-known from the direct documentation of Chinook Jargon, but known to us within CJ contexts precisely along the BC coast:

Their mode of stealing by stages was peculiar. The thing coveted was first hid nearby; if no inquiry was made for a period deemed sufficiently long the change of ownership became complete and its removal to their own hut followed, to be disposed of when opportunity offered. If you had a particle of evidence and made a positive accusation, with the threat of “King George‘s man-of-war,” it was likely to be forthcoming by being placed secretly nearby its proper place.

Earlier in the book, incidentally, is confirmation of another trend that my research has pointed out for years on this website: Chinese Pidgin English (the speech of a fourth party I reckon) is found in the same places we find Chinuk Wawa.

The unindividuated “John Chinaman” on the boat from San Francisco to Victoria from 1858 speaks what looks like pretty accurate CPE:

That “hi yah” is evidently not the slangy “hiya” pronunciation of “how are you” that my dad used to say all the time (said by most dictionaries to be of 1940s vintage but I’ve found a 1936 occurrence).

Instead it seems to be a distinct interjection associated with Chinese immigrants in America — and their Pidgin English — quite far back, thus this gold-rush era find: 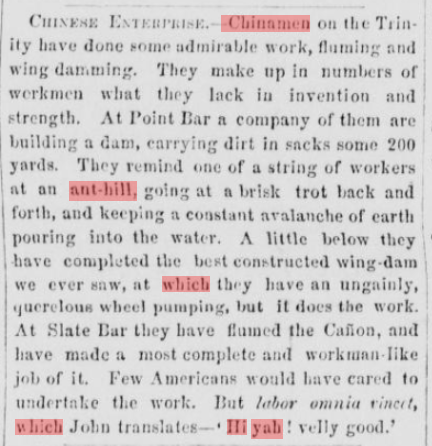 ← Indian vs. Chinaman
Sin as a Jargon word (kinda the opposite of ‘sin’) →