For bald heads! (My ears are burning)

Skookum Root Hair Grower was a nationally sold product in the USA.

William C. Halleck, of Portland Oregon, registered the words “Skookum Root Hair Grower” as a Trade Mark for a “Hair Vigor or Grower” in 1891 (#20,274). He included a label with the Trade Mark Petition. Halleck said that he had been using the brand name in his business since 1890. In 1893, The Skookum Root Hair Grower Co., ran a large ad in the National Druggist. They claimed that they were advertising their product on a wider scale than any other hair preparation ever put on the market. At that time, they listed their business address as 57 S. Fifth Avenue, in New York City. The ad also showed the Trade Mark from the label. According to Fike, the product was advertised by the Hillside Chemical Co. of Newburgh, New York in 1895, and by the Kell’s Co. of the same city in 1935. In the 1896 and 1901 Morrison & Plummer catalogs, there was also a “Skookum Root Hair Death” for sale.

There is a fantastic article on Mr. Halleck and this company in the July 1, 1893 edition of the Pharmaceutical Era. It’s available on Google Books. If desired, one can also find a lot of material on the web relating to a lawsuit against Mr. Halleck.

The product may have been inspired by Native medicinal uses of a certain plant as a scalp wash, etc.

Emmons and De Laguna’s “The Tlingit Indians” on page 158 identifies skookum root with “American white hellebore” for that region.

This is kind of interesting! The actual expression skookum root seems to exist only in (Native people’s) English dialects of the northern Pacific Northwest coast. I haven’t noticed it elsewhere.

The earliest I’ve found the phrase “skookum root” is 1891, in connection with the Oregon-originated hair tonic. In Oregon itself, the only variance I detect is this attempt at referencing the widely advertised consumer product in a humorous Nez Perce “Indian name”: 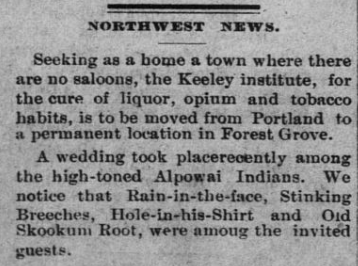 A wedding took place recently among the high-toned Alpowai Indians. We notice that Rain-in-the-face, Stinking Breeches, Hole-in-his-Shirt and Old Skookum Root, were among the invited guests.

(Ité Omáǧažu, Rain-in-the-Face, was a renowned Lakota leader who helped defeat General Custer. The other names are unkind fiction.)

While skookum and (later) root are both known words in Chinuk Wawa, they haven’t made themselves apparent to me in combination.

So I wonder how & when skookum root became a common name in southeast Alaska! If hellebore was even indeed an ingredient, was there a wildcrafting industry up there involving it, parallel to some of the “booms” that’ve occurred with chittim wood and yew bark?

I bet there is a story there.