My native language (the Chinook)

This is a sort of document that scholars haven’t mined for Chinook Jargon-related value. But by doing so, I’m just taking up a brilliant strategy that the mainstream of pidgin-creole linguistics has used for decades — getting deep into background historical documents. Amazing insights have been gotten in that way, showing in impressive detail how various “contact languages” have formed and developed.

We know that the North Pacific fur-sealing industry relied on significant Native involvement in the labor force (not to mention all the Scandinavians), and it was at its peak during the times when the Jargon filled a lot of communicative needs. So I found it interesting to look through the Behring Sea Arbitration documents’ Appendix, which backs up the main proceedings’ discussion of catch size, waste, environmental consequences, and so forth with large numbers of depositions from tribal sealers. These tell plenty about the importance and extent of Chinuk Wawa on the North Coast in the late 1800’s. (You’ll also pick up plenty of sealer lingo in English relating to animals that get harpooned or shot but then float away or sink, and to old bulls, nonresident seals, etc. etc.)

Let’s start with the list of deponents. Many of the names are obviously Indian; many more Indians involved used nontraditional names.

It was evidently assumed that Natives hunted seals their entire lives; they were excluded from the tally of years of sealing experience per employee:

There’s plenty of intersection between this Appendix and names known to us elsewhere in Chinook Jargon studies of Alaska and coastal BC, for example mentions of the US revenue cutter (ship) Corwin, the Hudsons Bay Company, and so on.

Of course there’s a data goldmine for future research in there, too, in the form of an exhaustive list of sealing ships by name, captain, home port, and so on.

One of the Natives noted in this document has what may be a Chinook Jargon personal name, Cedar-kanim (‘cedar canoe’ if it’s CJ; yes, sida is a known Jargon word). I’d otherwise guess this to be Lushootseed Salish since we also know of Pat-kanim, Swilkanim, et al., but he’s from the Canadian side, Vancouver Island.

Many or most of the Indians who made depositions are Nuuchahnulth, judging from their names and their  stated home villages including [Port] Alberni, Sechart (Tsishaht), and Ucluelet.

Another Native personal name that may be Chinuk Wawa is Sant-e, possibly Santi ‘Sunday’:

The vessels that were involved also frequented Russia’s Pacific shores and Yokohama, Japan. You might be interested to learn that the Copper Island “grounds” that they frequented were the home of the mixed Aleut-Russian language Mednyj Aleut, and Yokohama was the site of another trading language, Yokohama Pidgin Japanese.

Frank W. Adams of Victoria was a Chinook interpreter to the Indian deponents (pages 671-672): 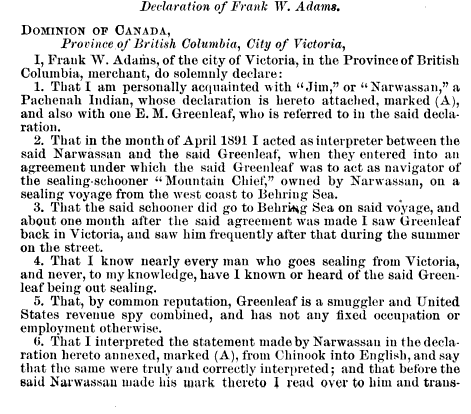 A Tseshaht Native man named Chileta testified about communicating in the Jargon with an American Navy crew (page 751): 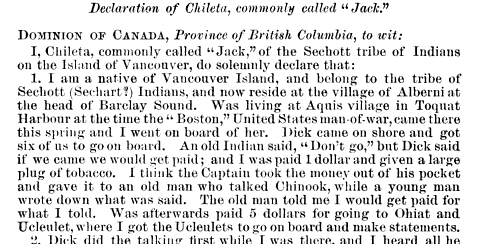 Another Nuuchahnulth, Charles Hayaks or Hayuks of Barclay Sound, cites an American ship where the Jargon was used, and notes the term Tyee ‘chief’ for a ship’s captain (page 754): 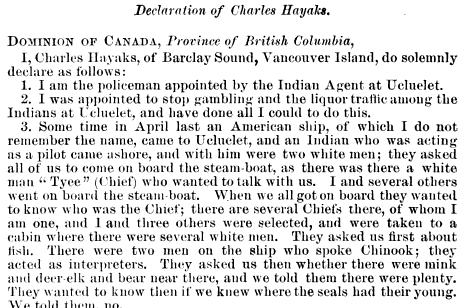 Clat-Ka-Koi of Tseshaht also reports communicating with Whites in “Chinook” on board a man-of-war (pages 759-760; note that manuwa was probably a Chinuk Wawa word, as it is borrowed into Nuuchahnulth and local Salish languages):

A number of the testimonies refer specifically to the man-of-war named USS Boston, pictured here: 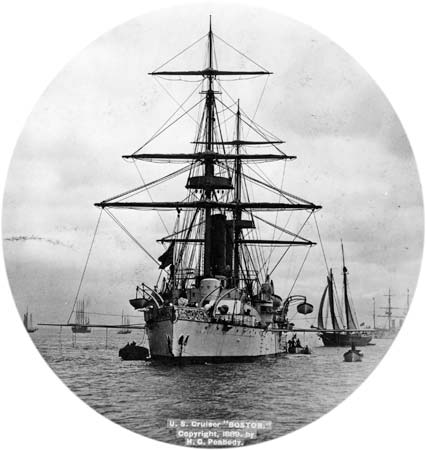 For example, Kickiana (son of Clat-Ka-Koi) on page 761, who interestingly identifies “the Chinook” as “my native language”:

The above-mentioned Sante or Clatmisk, also Nuuchahnulth, makes the same apparent declaration of linguistic competence or even allegiance to “my own language–the Chinook” (pages 763-764), which tends to support the idea that his name was from the Jargon:

On page 767, R. Maynard of Victoria testifies that his services were employed to explain in Chinuk Wawa the government’s questioning about the seal hunt to various Native men:

Ehenchessut of Alberni, too, tells on pages 767-768 of using “Chinook” with man-of-war men:

Andrew D. Laing of Victoria testifies that he “fully understands Chinook, the language used between the Whites and Indians all along the Pacific coast”, implying he has used it since 1871 with his Indian crews and trading partners, and stating that he was the interpreter for several of the Native deponents (page 783):

Laing himself makes another declaration to tell his role in these events at Neah; he characterizes the old man (“General Jackson”) having “understood [Chinook Jargon] perfectly”  (pages 800-801):

The testimony of General Jackson himself is then reproduced on page 802, including many Chinuk Wawa words (hiyou, Boston, tyhee, King George), perhaps as marks of the veracity of his fluency in that language: 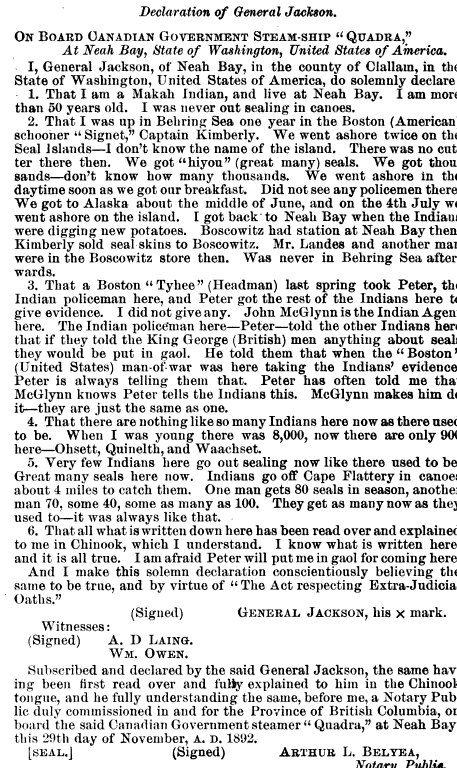 The Jargon words printed there as Cultus Pottach reflect the common expression cultus potlatch, a gift (literally ‘for-nothing giving’). Today’s data dump is my cultus potlatch to everyone who considers Chinook Jargon their language.

6 thoughts on “My native language (the Chinook)”