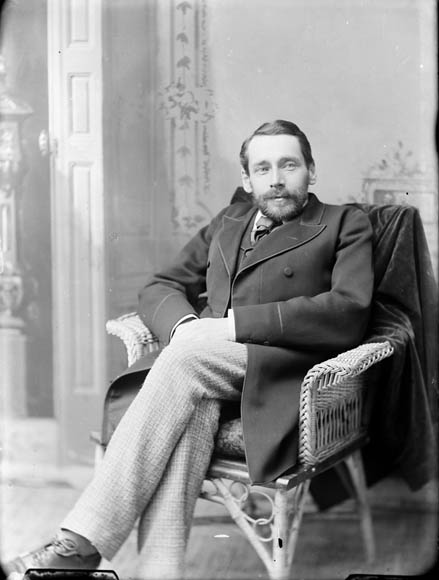 An excellent document of Chinook Jargon use — especially in the underdocumented northern end of its range — from a fella who put real effort into learning it, at a time when the pidgin was extremely useful in BC.

The two-volume book set of George Mercer Dawson‘s journals was edited by Douglas Cole & Bradley Lockner.  The University of British Columbia Press published it in Vancouver, in 1989.

In these volumes, I see vigorous frontier contact situation where two more more pidgins — I’m unsure how to count them! — were being thrown together as needed.

I’m preserving Dawson’s capitalization choices and suchlike. Let me put any explanatory comments in brackets after each block of quotations.

page 78: September 1, 1875: Tatlayoko Lake: “The women came out, but as they could speak but little Chinook, could not learn much from them, beyond the fact that the Camp of white men was Si-yah or far away.”

page 80: [date?]: “They [two St’át’imc (Lillooet Salish) men, Tommy & Jimmy] both speak & understand English to a limited extent, so that my Knowledge of Chinook does not advance so fast as it otherwise might.” … “The indians about here belong to the Chilacotin bands, & are Known as Stoneys (not to be confounded with the Nakoda/Assiniboine/Stoneys of the plains) & are many of them so barbarous as not to understand the Chinook Jargon.”  [This characterization of their linguistic repertoire matches what we hear of Tsilhqut’in / Chilcotin people’s typically weak attachment to CJ & their frequent use of a mixed CJ-English. — DDR]

page 89: September 18, 1875: Clisbaco River: “Charlie [a.k.a. Charley, “one of Mr Jenning’s [sic] Indians”, p.88] told us a story in broken Chinook, this evening, about the cliff on the Chelacotin R…Says long ago, three generations at least, bad siwashes from the Salt Chuck Came there, & camped on top of the bluff.  Thence they used to watch the Chelacotan indians & shoot them as they passed along the valley, with arrows, & no one Knew how it was done.  At last a Chelacotan Siwash passing saw a fire on the bluff, & went & told the others, who sent a man up, who while the bad indians were asleep found out how many there were.  Then the other indians surrounded the bluff, & while they sent a clootchman to walk along in the valley below, thus attracting the attention of the Marauders; Came up behind them & made a sudden onslaught, killing them all, except one indian, supposed to be the medicine man who flew away in the air from the edge of the bluff ‘All same wind Klattawa, all same chicken.’  This at least is what the oleman wa-wa.”  [Again a blend of pidgin English with Chinook Jargon.  Salt Chuck = ‘salt water; ocean’; clootchman = ‘woman’; klattawa = ‘go’; oleman wa-wa = ‘old people say’; “wind” & “chicken” can be taken as CJ; even “all same” occurs in some folks’ CJ — DDR]

pages 94-95 [date?]: [location?]: “I am progressing pretty rapidly in my knowledge of Chinook, & can now understand pretty well & Speak a little.  It is very easy to learn of course there being no grammar at all & a few words going a long way, especially when the range of subjects usually forming topics of conversation is limited.”

page 96: same date & place: “Arranged with the young lad to come back with us after a considerable amount of wa-wa had been got through among the Indians in their own language.”  [wa-wa = ‘talk’ — DDR]

page 98: October 10, 1875: [location?]: “Mail man arrived from Quesnelle with letters &c. & with him the Cargador Prefecto & an Indian packer…”  [Cargador = ‘packer’ in Mexican Spanish, traces of which we find around the frontier-era BC interior — DDR]

page 204: [date?]: vicinity of Eu-tsi-ni-koh R.: A Native man who survived a smallpox epidemic in his childhood that killed his family “Told us how he buried all one after another but never took the disease himself, till at last ‘connoway mamalouse, nika one stop!’  Hi-yu Sick tum-tum, hi-yu Cly.‘  &c.”  [ = ‘Everyone died, I alone remained!  Lots of sadness, lots of crying.’ By the way, the editors of this edition were excellent at spotting most of the Chinook Jargon in Dawson’s diaries, but here & in a few other places their translations of it are off. — DDR]

page 213: June 21, 1876: Gotcheo Lake: “a Celebrated resort of the Indians, a building of their’s existing here Known as the Culla-Culla House, or Bird House, a large Crow Carved in wood, rather neatly, & painted black, adorning one gable.  The Indians tell me that the [abode?] made by Bella Coola Indians, the natives here not understanding painting & decoration so well.”  [There’s a photo of this traditional Coast-style plank house on the fourth page of plates — DDR]

page 226: July 10, 1876: [location?]: “Moved on to place about 4 miles from Salmon House, where best feed for animals, & above the bad hill.” … “Noticed three Small heaps of stones near the trail not far from Salmon House resembling as much as Anything the old burial Carins of V.I. on enquiry find the Indians have a superstition regarding them, that any man Passing without potlatching a twig or stick to each, will soon die…Indians seem to believe that some people are buried here, but do not know who, some say perhaps the ‘tenas men‘ These last a Sort of mystical dwarf or gnome race who were formerly Supposed to steal Klooch-men &c.  A circular hollow resembling the mark of a Kuquelly house, on the Salmon Ho[use] flat, attributed by an Indian I asked, to the same agency.”  [Is Salmon House, evidently a CJ name, another traditional Coast-style plank house?  These did typically have long-established names. Potlatch = ‘to give’; tenas men = ‘little people’, a widespread Coast traditional belief; klooch-men = ‘women’; Kuquelly house = ‘underneath-house’, a traditional pit-house of interior BC — DDR]

page 254: September 8, 1876: Francois Lake: “Extraordinary mixture of languages in common use by the Indians obtained at Ft Fraser.  Chinook, Canadian french, & their proper language indiscriminately mixed with fragments of English, the latter chiefly consisting of phrases new here perhaps but worn out elsewhere, such as you bet, & others of all sorts, picked up from whites.”  [Once again a highly mixed, probably quite recent, pidgin used by Dakelh / Carriers and Tsilhqot’in / Chilcotins — DDR]

page 259: [date?]: [location?]: “The lake remains unfrozen long after the snow covers the surrounding country, & (as I understand it) in Some mild winters does not freeze at all, generally however ice forms, which may remain only a short time late in the winter & then ‘wake si-a warm — illihie‘ goes away.”  [wake si-a warm — illihie = ‘almost summer; springtime’, an expression that’s mistranslated by the editors because they put undue trust in Dawson’s punctuation 🙂 — DDR]

pages 261-262: [same date & location]: “The Indians then proceeded to relate ‘Leprates’ stories, which they fully believe of course, & seem to think must be at least equally interesting to me as that above given.  The deluge & the Creation & fall of man, followed in succession.  Filtered through the priest & then the Indian mind, & finally told in Chinook Jargon, these Sounded equally improbable & absurd with the others.  Charley got quite excited over the Creation, going through the form of moulding clay into the shape of man, & then blowing on it to signify giving the breath of life, then relating the creation of woman, & the happy condition of the primaeval pair on a ‘skookum ranch‘ ( = Eden) with plenty potatoes, turnips, carrots &c. &c.!  Finally one tree with olallies which was forbidden &c.”  [Leprate = ‘priest’; skookum ranch = ‘excellent farm’ — DDR]

page 264: September 20, 1876: [same area]: “Two localities where designs have been made on the rocks by Aukulty Siwashes.  Neither of them at all clear, nor apparently of any Significance, but Cultus Mamook merely.”  [Aukulty Siwashes = ‘long-ago Indians’; Cultus Mamook = ‘idle activity’ — DDR]

page 265: September 21, 1876: Telegraph Crossing area: “Mr Alexander kind enough to help me in the conference [interviewing potential canoemen] by statements to him being translated into French Jargon to his servant, & by him turned into Indian.”  [This is one of the comments by Dawson that smells like the “French of the Mountains” pidgin that I’ve written about — DDR]

page 269: [date?]: [location?]: “Asked an old man about it [traditional story about a glacier], who however not able to speak Chinook or French, but who afterwards told the story to one of the HB men, who gave me the following…”

page 281: [date?]: [location?]: “We soon shot down to them & then my Indians of course began an animated conversation with their ‘tillicums‘. … [at] the crossing place of the trail to Stewart Lake…Here the Indians must have another little ‘wa-wa‘…”  [tillicums = ‘friends’; wa-wa = ‘talk, chat’ — DDR]

pages 286-287: October 9, 1876: same area: a story gotten from “Old ‘Prince’ “, chief Simio of the Stuart Lake Carriers, who footnote 819 explains “was given the name ‘Le Prince‘ by French-Canadian traders in the area.”  His story contains other bits of French: “[Bourgois?] [brackets belong to the editors–DDR] invites all animals to a dance…The ‘Monde‘ only drank when the [SIC] could get a little from dew shaken from plants into bark dishes.”  [These words and the context also suggest to me the French of the Mountains pidgin — DDR]

The photo of Culla-culla House: