General Pickett: “Keep up a skookum tum-tum, dear one”

Here we have yet another Civil War hero connected with Chinook Jargon; seems like a lot of big characters made their way to the Oregon frontier prior to their big chance at battlefield glory.

Chapter V of this book is titled “Skookum Tum-Tum”!  Pages 31-32 of that chapter contain some of the only Chinook Jargon in the book, a few repetitions of the General’s admonition to his wife to “keep up a skookum tum-tum” (a strong heart) while he is away at war.  Page 31 has her explaining “He had learned the phrase from an old Chinook warrior on the Pacific coast…” 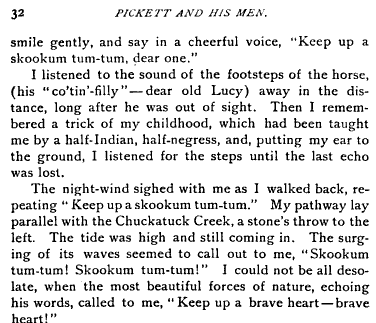 It’s just a tidbit of the language, but it’s remarkable how often you find major figures of the War Between the States in the early history of the Pacific Northwest.

By the way, at least one other figure of Jargon importance makes an appearance in Mrs. Pickett’s memoir: Dr. George Suckley, a physician and naturalist who spent significant time in the company of such Northwest luminaries as Gov. Isaac Stevens and language documentors George Gibbs and James Graham Cooper.

8 thoughts on “General Pickett: “Keep up a skookum tum-tum, dear one””