Very precious words: A southern interior BC Salish chief’s speech against the government is quoted on the front page of the newspaper.

And this is real live BC Chinook Jargon.

Sir Richard McBride was born in 1870 in New Westminster, and the Dictionary of Canadian Biography maintains that he spoke CJ with Native people.

So he must’ve understood the scorching critical words of Secwépemc chief “Basil” (I assume Basil David) of the Bonaparte First Nation about the McKenna-McBride Royal Commission that re-drew Indian reserve boundaries in BC. 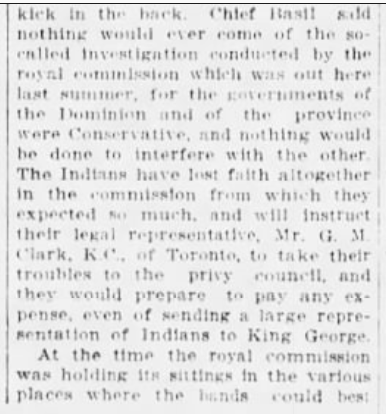 (The article continues beyond what I’ve shown here)

In other words, Basil was conveying the information that when the Indians called on Sir Richard some time ago Sir Richard calmly informed them that they had no rights. He did not believe this for he knew they had rights. The Indians had not been put up to bring up the subject by white men, as McBride intimated, but the Indians were being placed in a tight place and all that was their was being taken away. The land, the chief contended, originally belonged to the Indians and still does. The government never bought it. ‘But they are taking away the land, the fish, the deer, the homes, the timber and giving nothing in return, and the commission would only help the government. The Indians want to be brothers with the whites but cannot when the governments are stealing all they have.

Chief Basil, like the other speakers heard at the gathering, seems born to oratory, and though a white person probably would criticize his delsarte [???], the Indians applauded vigorously his impassioned words, at times English and at other times Chinook.

I don’t understand “delsarte” (is it named for this fella?), but I know the Chinuk Wawa that’s quoted is perfect BC stuff, recognizable from comparision with countless other sources.

A couple of extremely BC Chinook Jargon words are the verbs sell and help (kopa), and the noun papoose ‘baby; child’.

Did you understand the words of the kúkpi7 (chief)?

← Reader challenge: Can we find a copy of the 1862 “Guide and History of Salmon River & Cariboo”?
1920: Volleyball invitation in Tacoma →